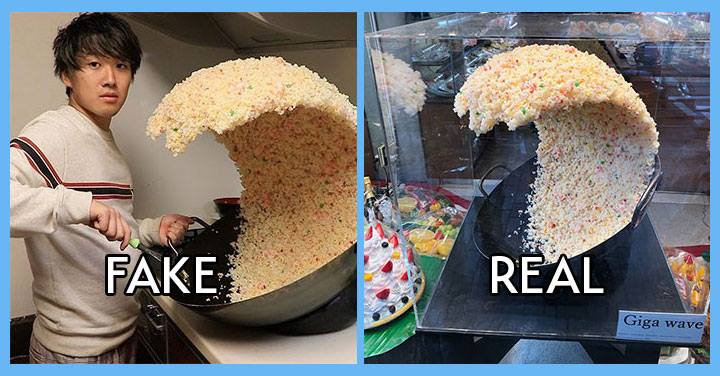 15 Viral Photos That Turned Out To Be Fakes

Here’s a shocker: people on the Internet lie. The main currency on the web is attention, and plenty of us are unscrupulous enough to lie for it.  I’m sorry to break the news to you.

Photos are one of the Internet’s most commonly shared types of media, and it shouldn’t be surprising to learn that many “viral” photos were faked. Photo editing programs like Photoshop make it easy to phony up a sensationalized image that will fool the general public. It happens literally every day. We here at Awkward have been tricked plenty of times ourselves! (And boy have you let us know about it.)

Of course, the same technology used to create the photo also makes it easy to detect when a photo has been faked. Plenty of people aren’t fooled. But by the time someone points out the shenanigans, the photo is already a meme. And memes, like viruses, are unkillable.

Well today, we’re setting the record straight! Here are 15 photos that went viral online and were later proven to be fakes. You might not be able to trust the Internet ever again. (via Bored Panda)

1. Nobody gets higher than an astronaut. 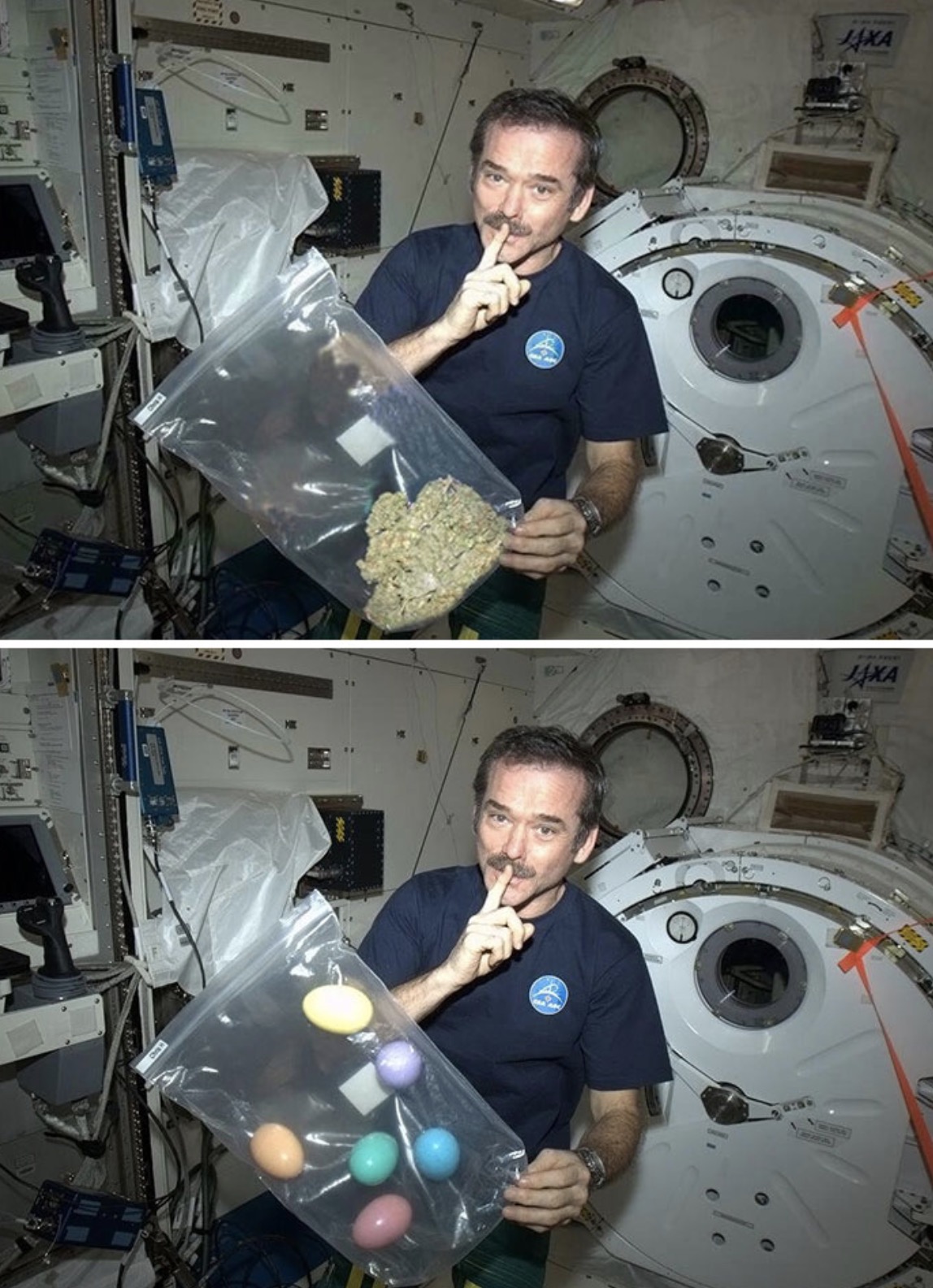 Man, I hope you weren’t fooled by this one. You didn’t actually think NASA would let an astronaut go into space with the biggest bag of weed you’ve ever seen, did you? Or that, even if an astronaut did partake and did sneak way too many nugs onto a space flight that he would willingly be photographed holding them?

The original photo showed Canadian astronaut Chris Hadfield holding a bag of Easter Eggs during Expedition 34/35 to the International Space station in 2012-2013. The mission was five months long and included 35 crew members, so even if Hadfield had brought weed with him, he would have needed at least double that amount.

2. When Venice freezes over. 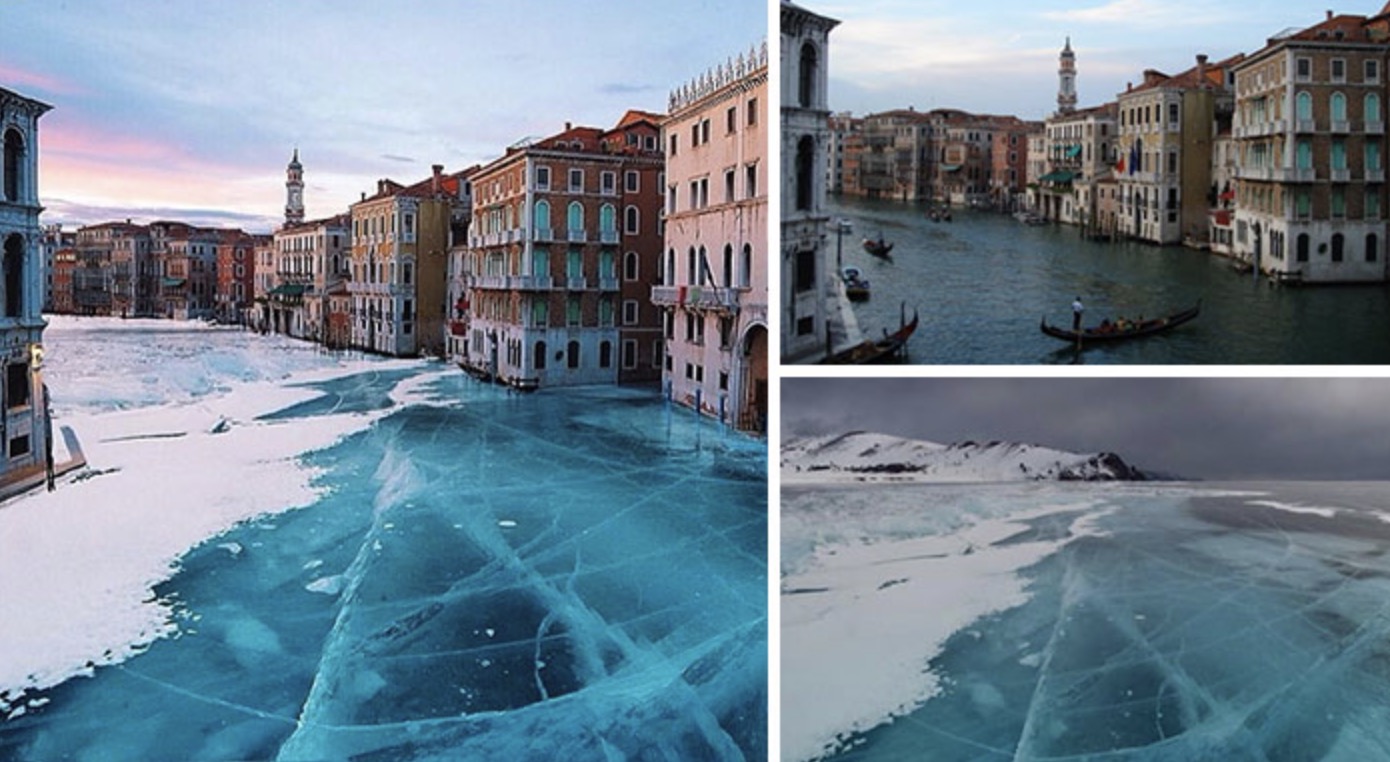 Yep, that’s a fake. It’s not that Venice’s famed canals never freeze–the Venice lagoon most recently froze in 2012. It just doesn’t look like that when it does. This photo is a combination of a typical photo of Venice’s Grand Canal, and a photo of Russia’s Lake Baikal, taken in 2013.

3. Does a bear chase a cyclist in the woods? 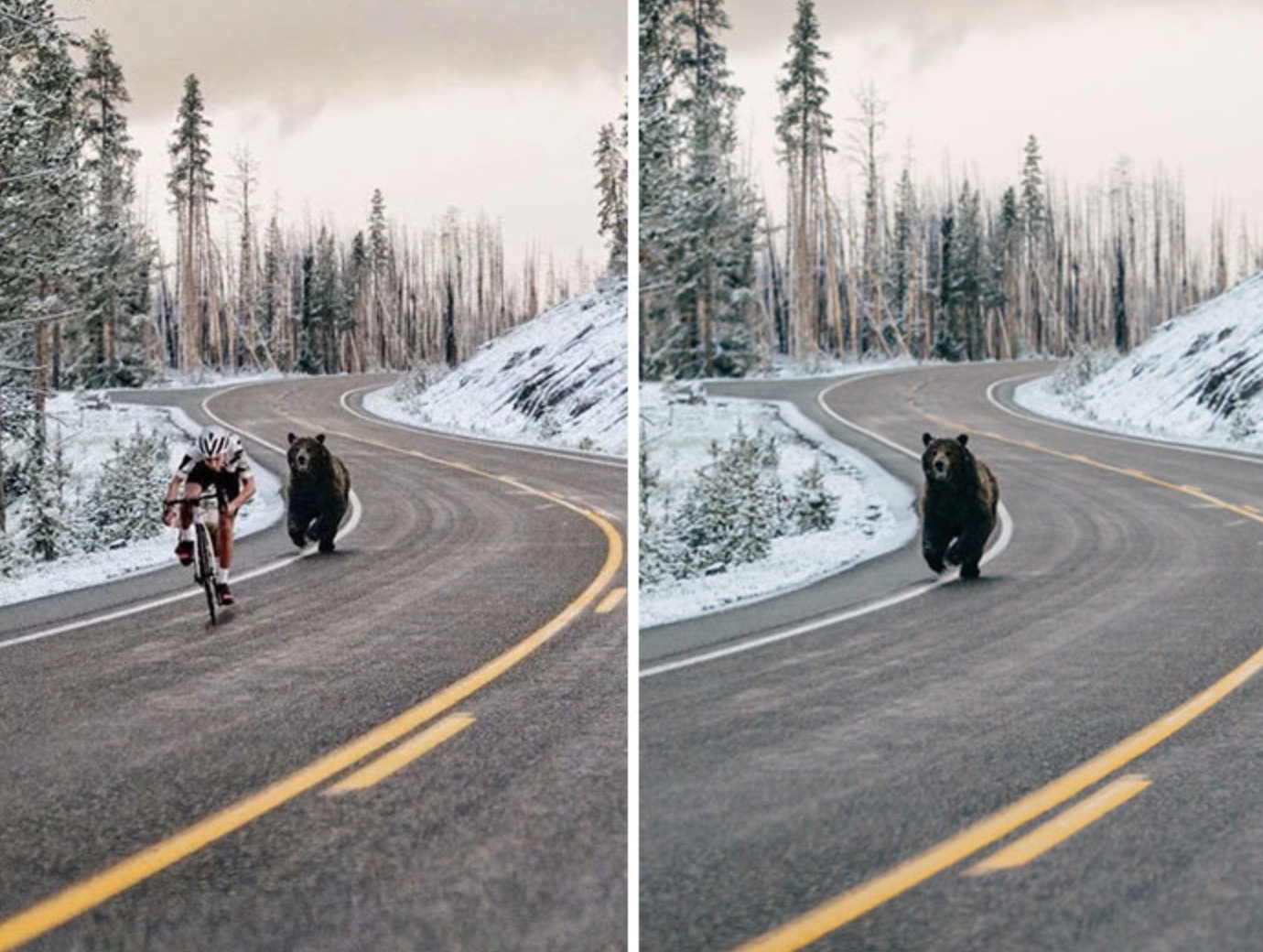 If you’ve ever shared the road with a particularly aggressive cyclist, maybe you’d likeSnopes this to be real. (Please don’t @ me, Bike Twitter.) Sadly, it didn’t happen. figured out that the original photo only showed the bear running down the road in Yellowstone Park, and was taken by photographer Adonis Arias. The cyclist was added later.

I mean, there’s snow on the ground…wouldn’t the cyclist be dressed warmer? Come on now. 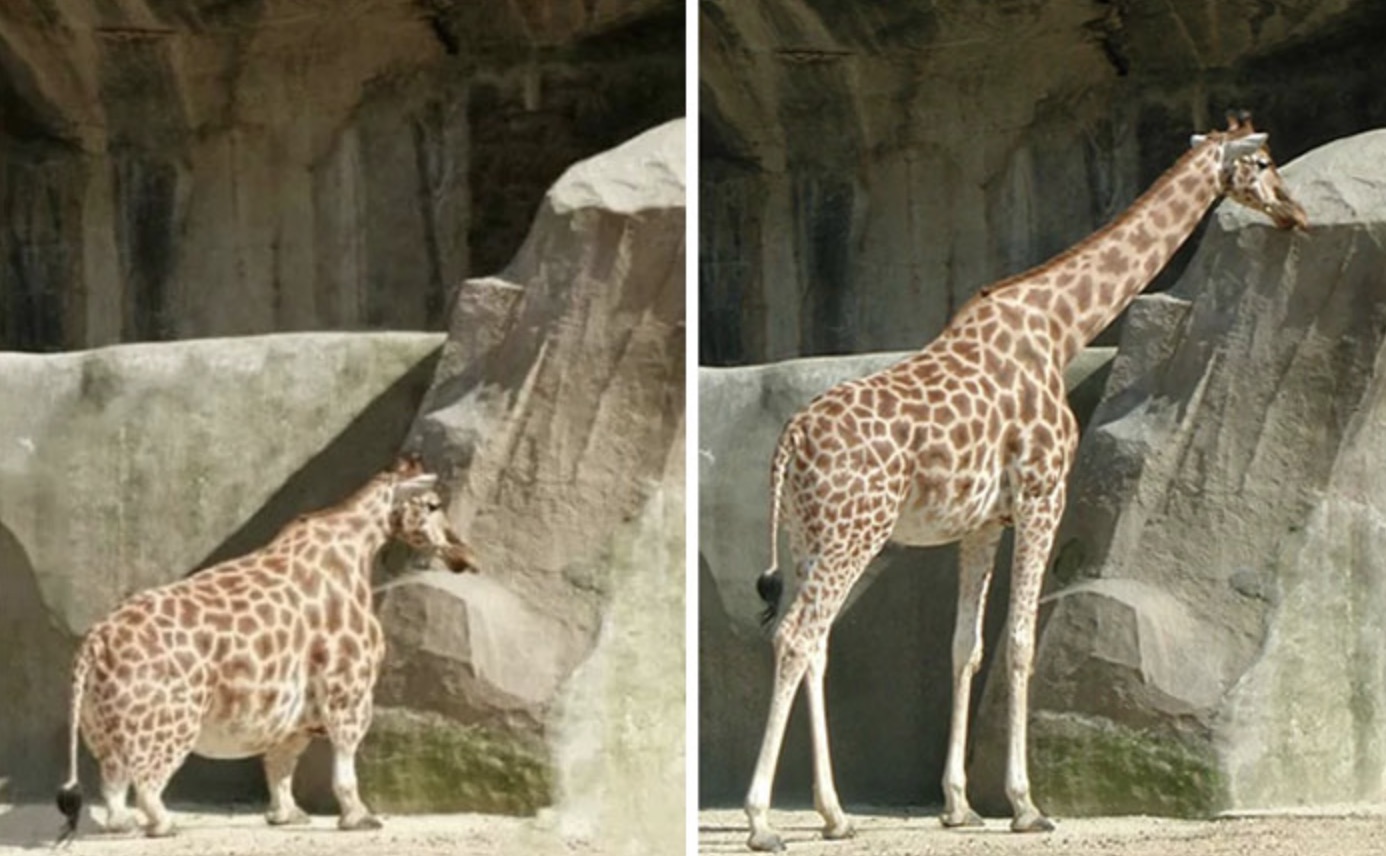 While some giraffes are born with dwarfism, this one is just really badly edited. Snopes determined that the world’s unluckiest giraffe comes from a 2010 “Compact Animals” photoshop contest on Pxleyes.com. The real giraffe photo was taken by Emmanuel Wiedenhoff at a zoo in France in March 2004. 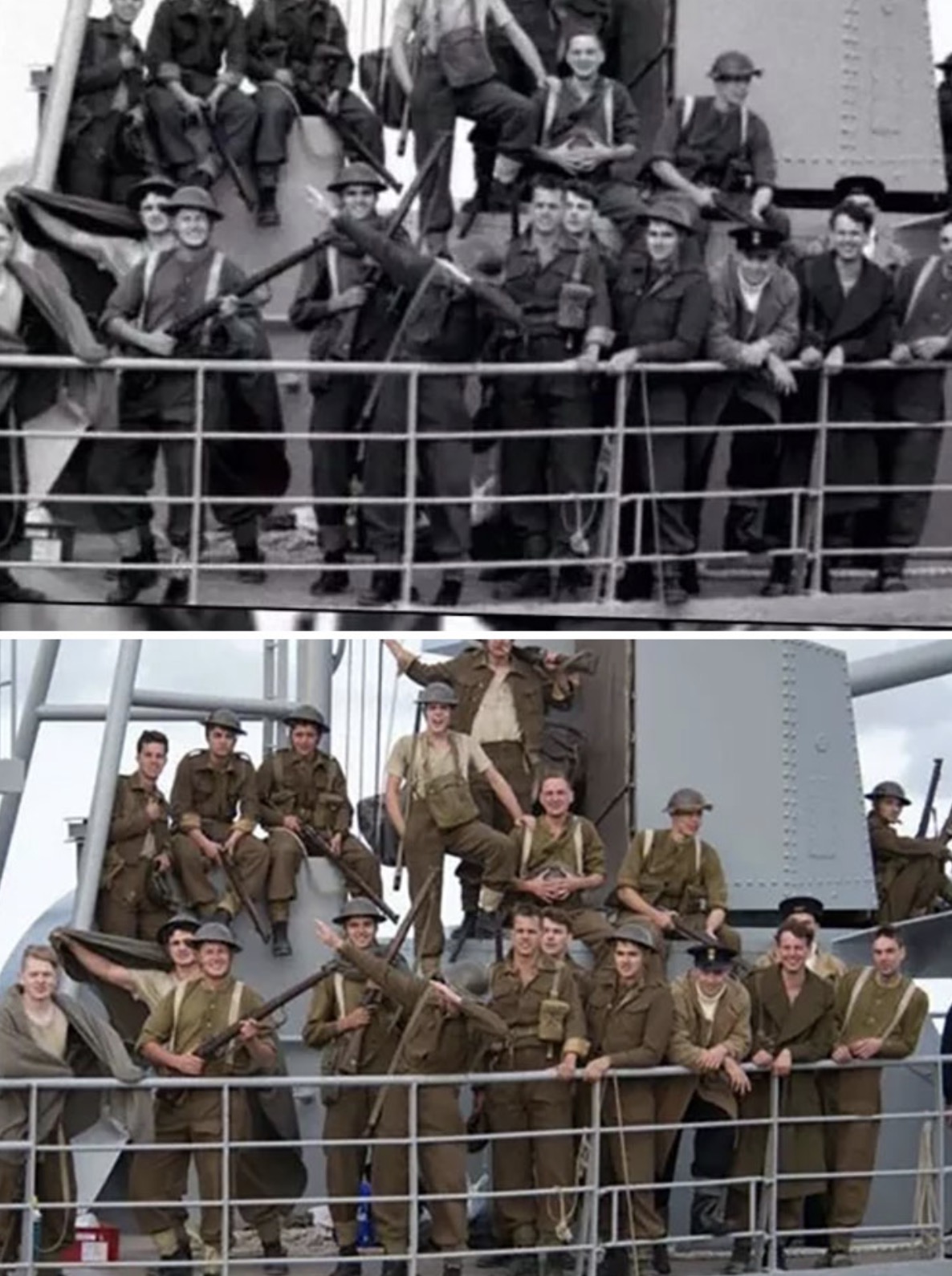 “Dabbing is way older than you realize!”, or so this photo would have you think. Supposedly showing the world’s first dab on a warship in 1932, this is really just a cast photo from the World War 2 movie Dunkirk. 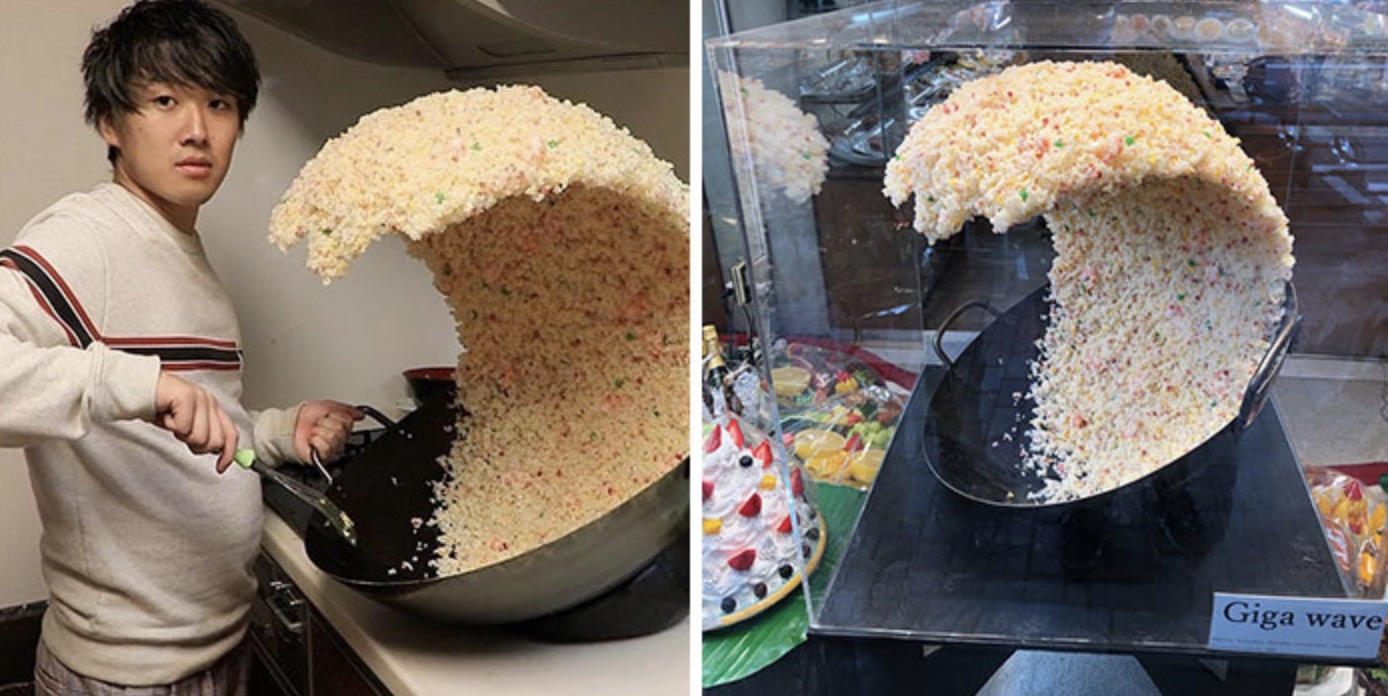 Nobody is that good at making fried rice, and the guy on the left definitely isn’t. YouTuber Kanta of Mizutamari Bond admitted to doctoring the photo to make himself look like the world’s greatest rice flipper. The real photo comes from a store window display in Tokyo. 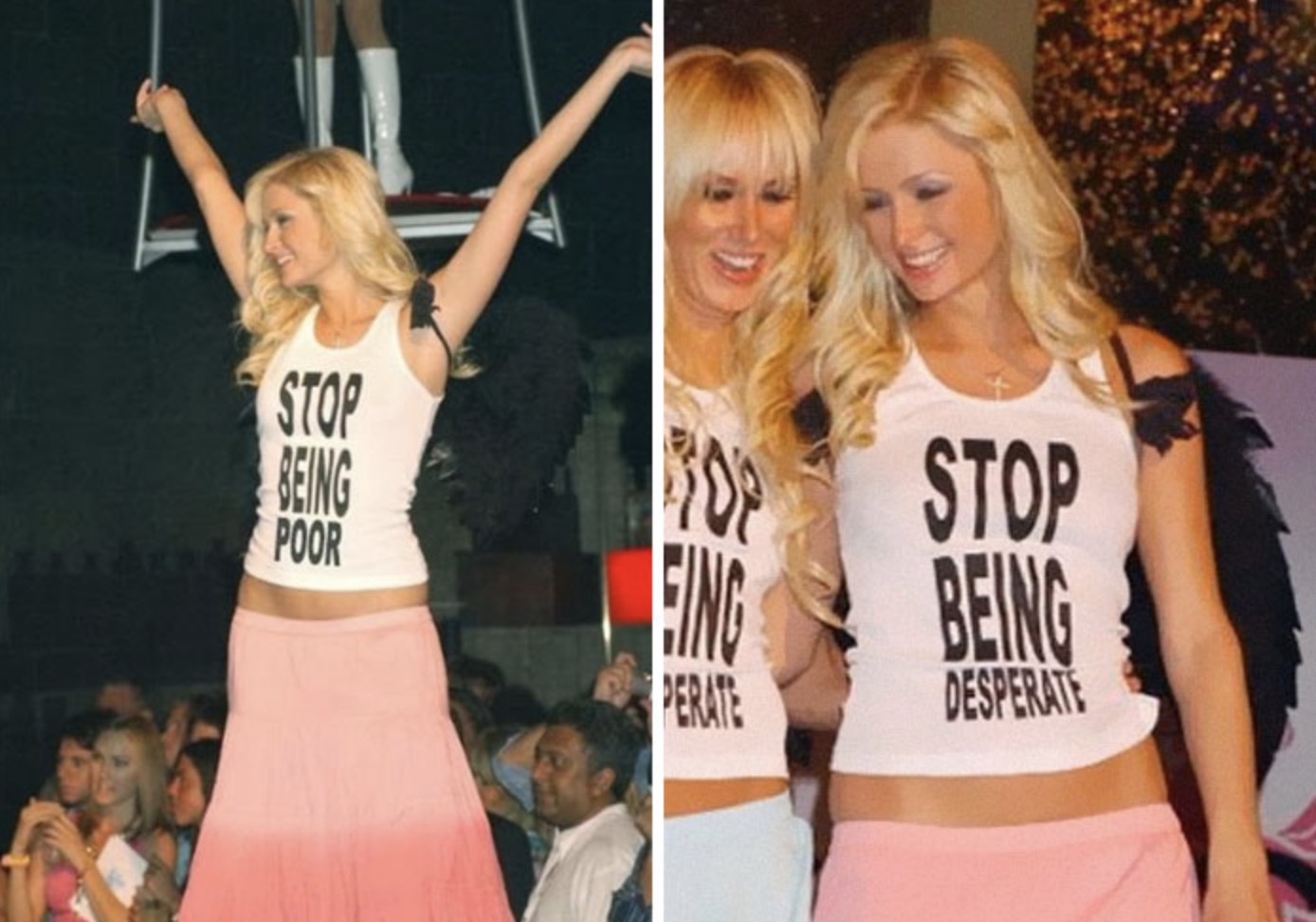 While everyone’s favorite early 2000’s socialite probably doesreally said own several “Stop Being Poor” shirts, she wasn’t wearing one that day in 2005 when the photo was taken. Her shirt “Stop Being Desperate,” which is better, barely.

8. The whimsical castle that wasn’t. 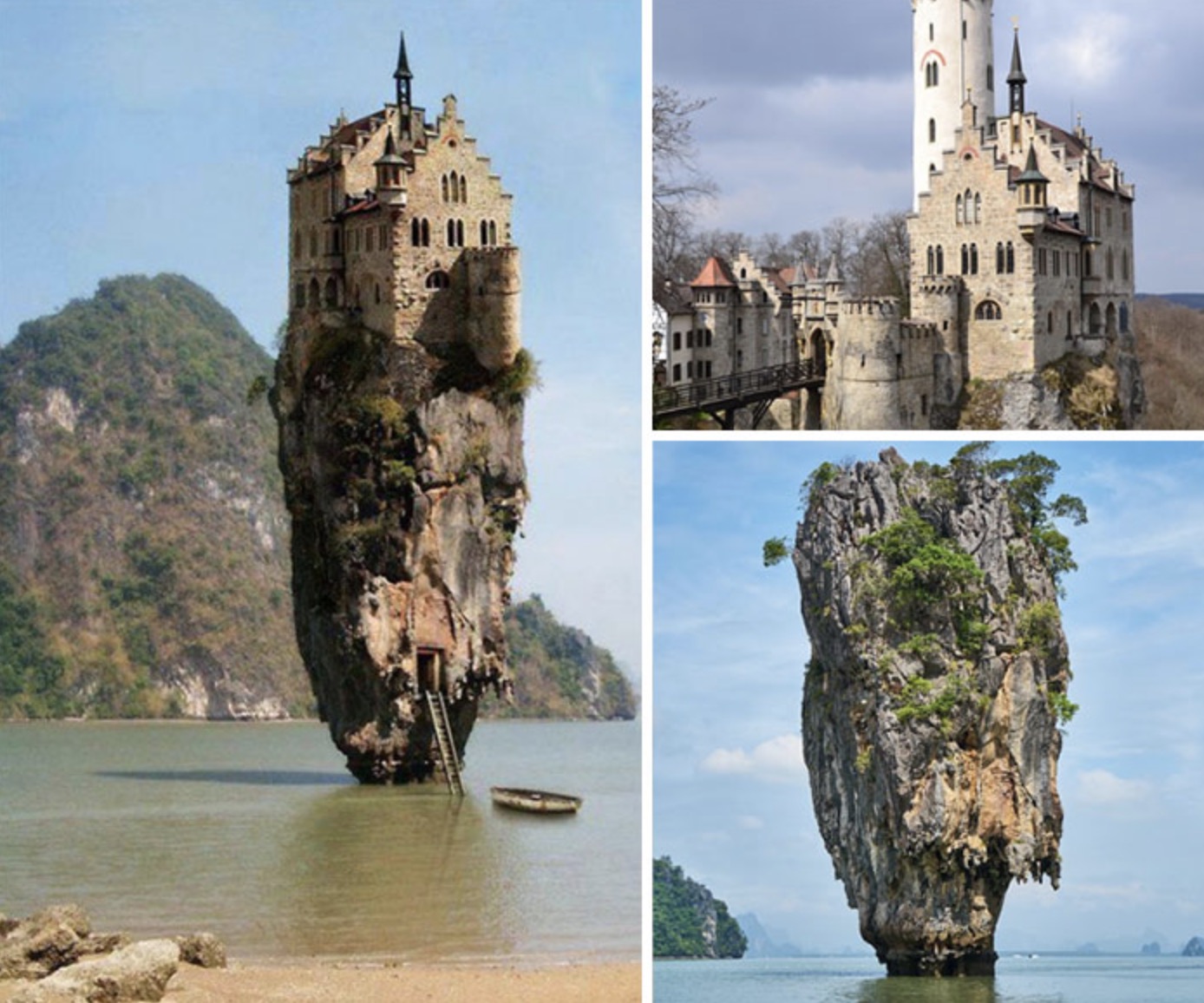 That castle looks like something from Game of Thrones or Lord of the Rings, which should probably tell you that it isn’t real. The fake viral photo is really a composite of Castle Lichtenstein, in Germany, and the Ko Kao Phing Kan islands, in Thailand. The islands are also known as the “James Bond Islands” after appearing in the 1974 Bond film The Man with the Golden Gun. 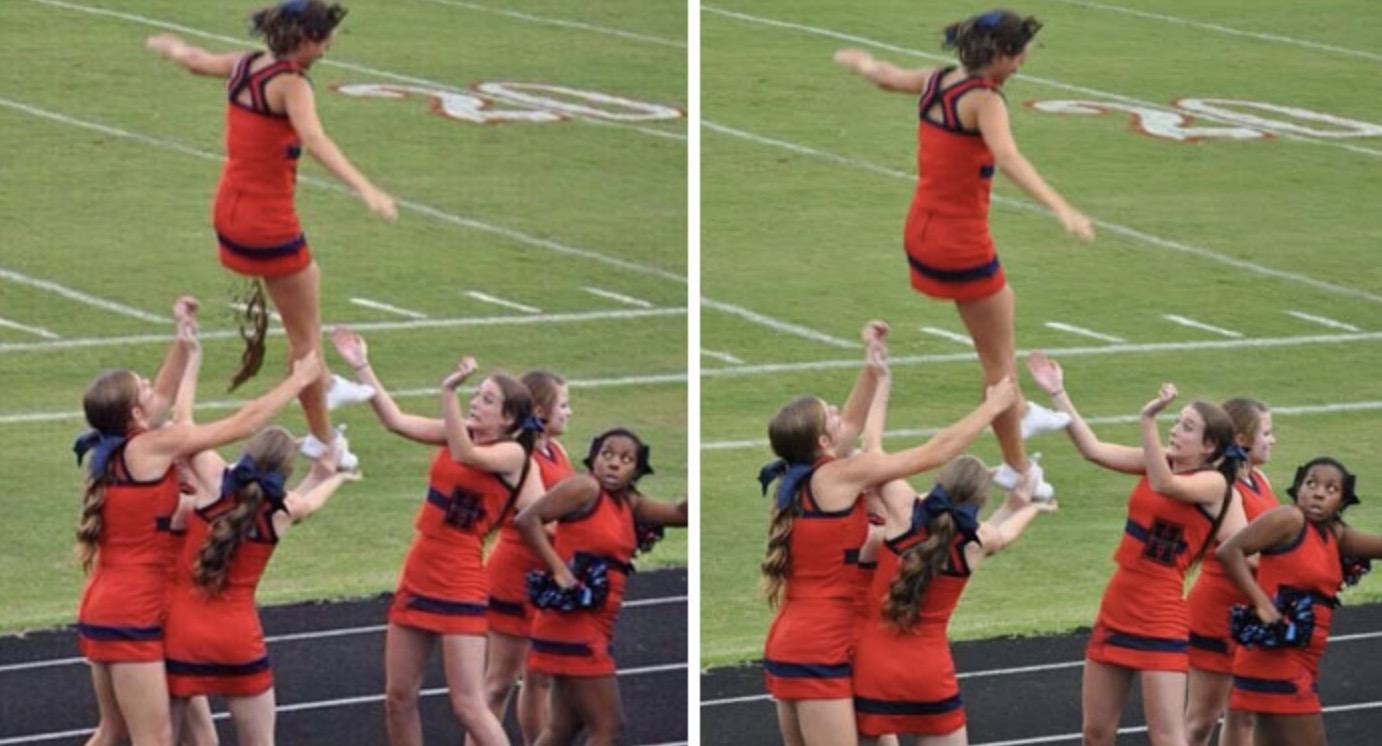 A cheerleader losing control of her bodily functions during a football game is either your worst nightmare, or your very specific fetish. (No judgment.) The diarrhea photo comes from another photoshop contest, this time appearing on the r/PhotoshopBattles subreddit. Thank you for getting to the “bottom” of this mystery, Snopes. 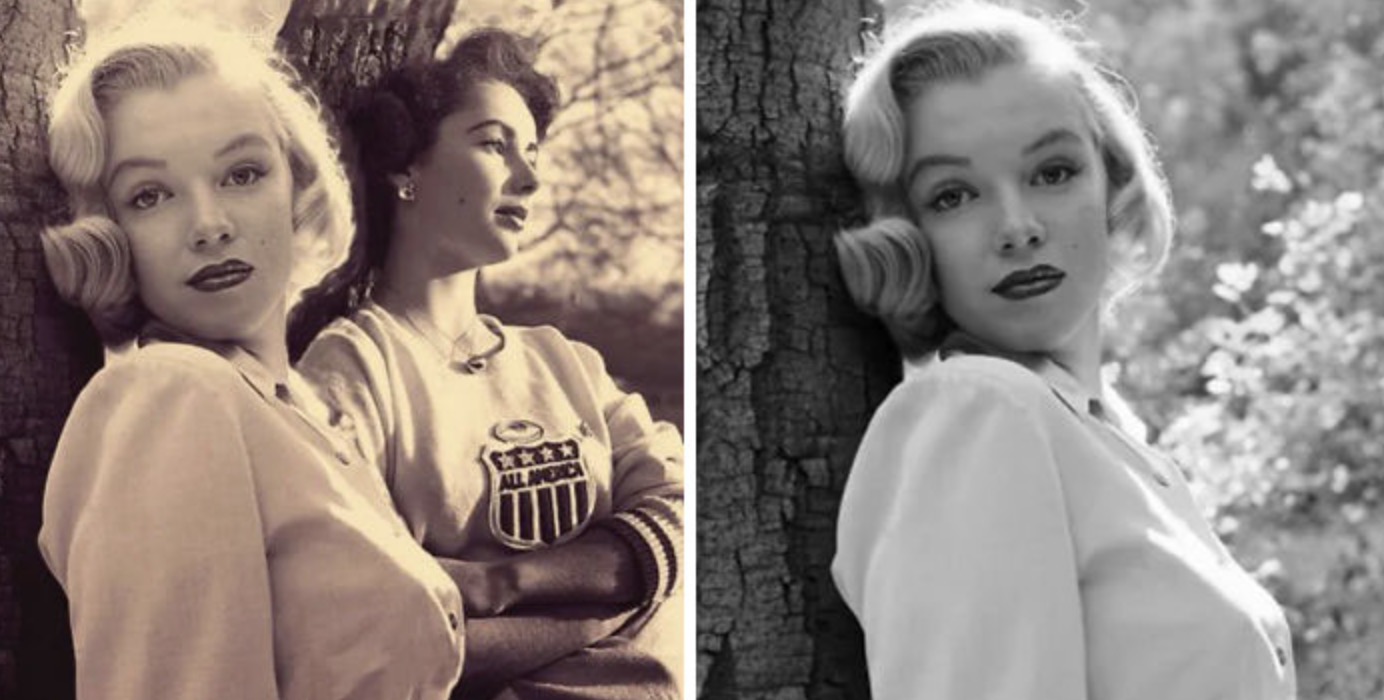 Nope, Liz Taylor and Marilyn Monroe didn’t take a photo together while leaning against a tree. This is a composite of two photographs. The Taylor photo was taken in 1948 by photographer Mark Kauffman, while the Monroe photo was taken sometime in the 1950’s by Ed Clark.

The fake photo was shared by the history-themed Twitter account @HistoryInMoment in 2017. Which is ironic, because a “moment” is exactly how long it took for their credibility to go up in flames.

You didn’t really think that’s how MGM made the “roaring lion” intro, did you? By building a cardboard MGM logo, (which is backwards for some reason), then hooking a lion up to an IV and sticking his head through it? Of course not! The actual photo is of a two-year-old lion named Samson, who underwent brain surgery in 2005. Meanwhile, MGM has used seven different lions for their intro since 1916. The most recent lion, named Leo, was filmed roaring in 1957.

12. Never take a selfie, especially when flying a plane. 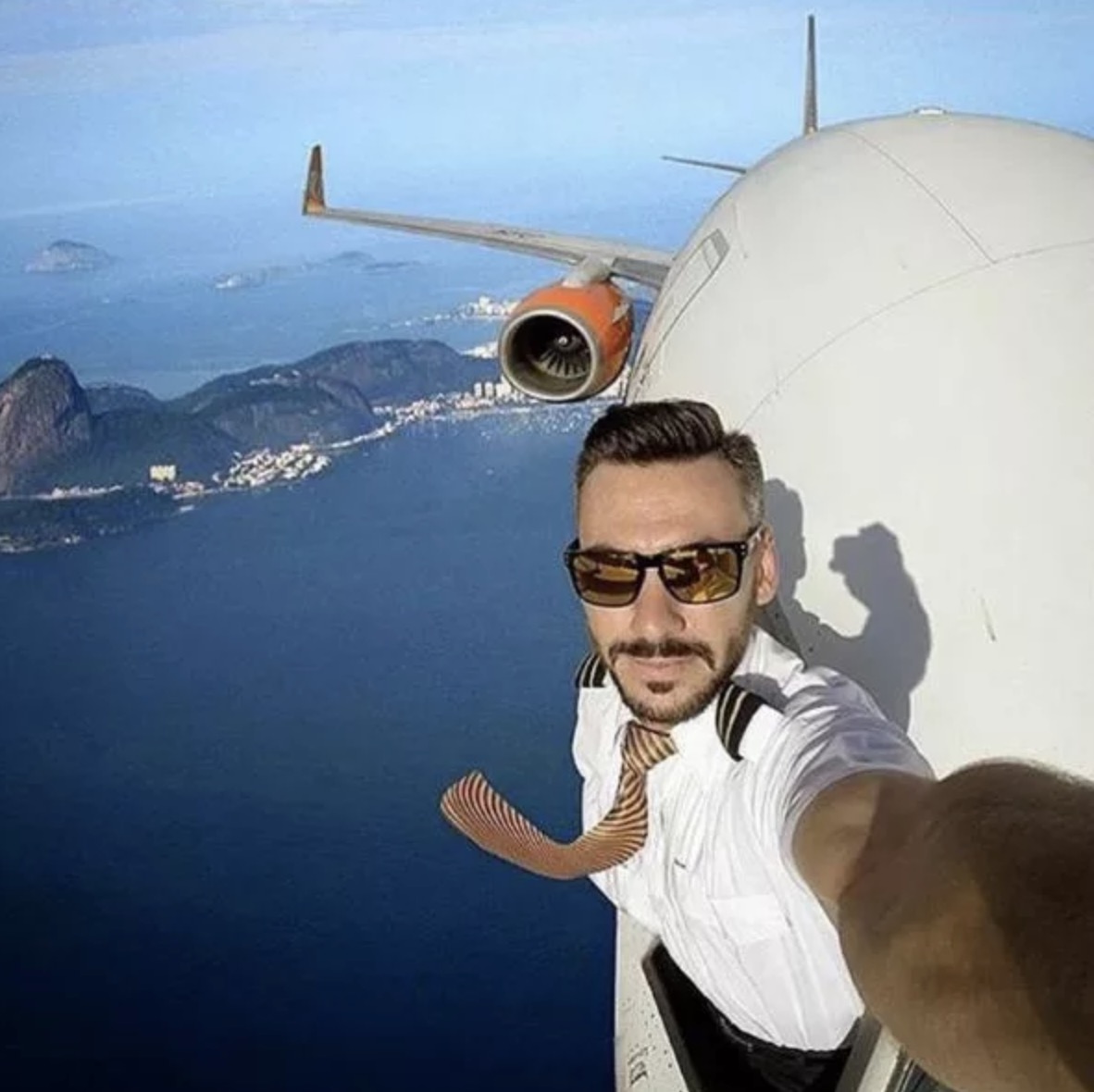 Is that a photo of the world’s second-worst airline pilot, behind only Denzel Washington’s Whip Whitaker from the movie Flight? Nope, it’s a phony. The photo purports to show Brazilian pilot Daniel Ganso taking a selfie while hanging out of the cockpit mid-flight. In reality, the photo was taken on the ground and later doctor. Ganso admitted as much.

To be clear, black lions should exist. They look cool as hell, and “Black Lion” sounds like the greatest 80’s punk band you’ve never heard of. But unlike a MacBook Pro laptop or a Gameboy Pocket, lions don’t come in black. The black lion is a doctored photo that shows the just-as-impressive and rare white lion. 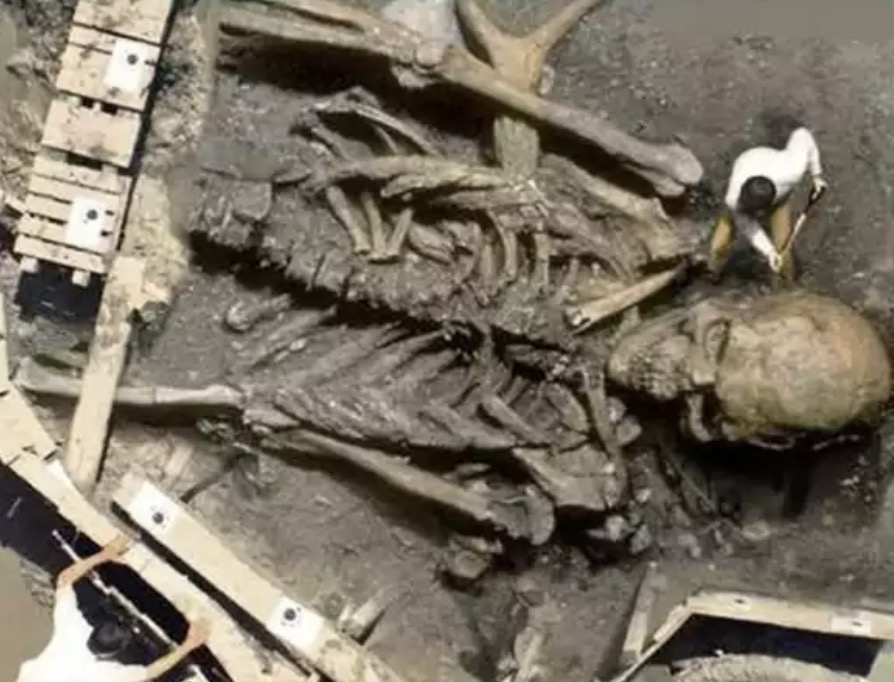 Whoa! It looks like the story of Jack and the Beanstalk might be based in fact! Or not. Supposedly, this photo shows the discovery of a literal giant, but it was created for yet another photoshop contest. The real photo depicted the excavation of a mastodon in upstate New York. This time, not only did the public get fooled, but actual news sources did as well. Back in 2004, The New Nation, a paper in Bangladesh reported on the giant skeleton as if it were real.

15. It doesn’t take an Einstein to know this one’s fake. 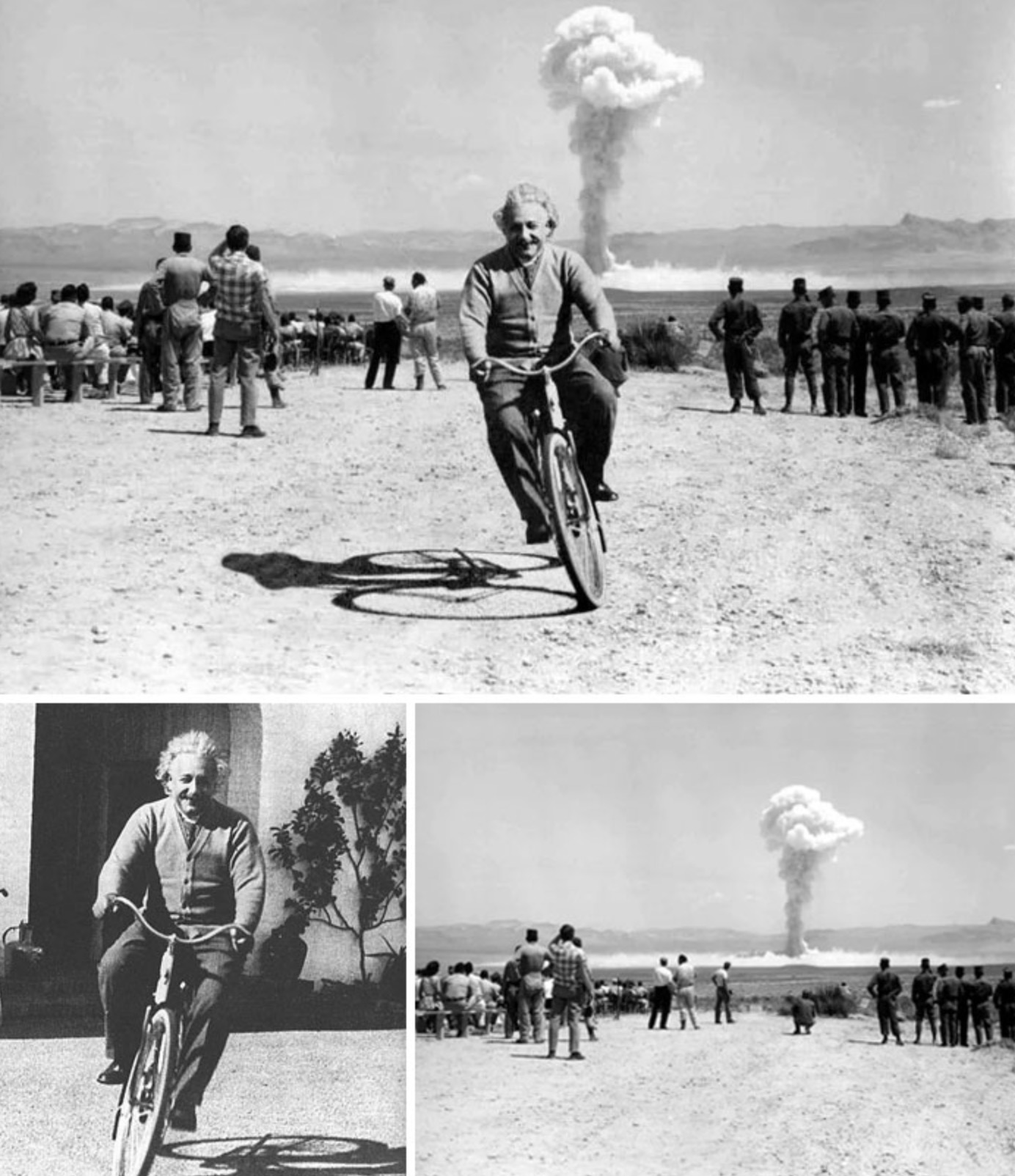 The photo of Einstein on the bike was taken in Santa Barbara in 1933. The mushroom cloud photo was taken at the Frenchman Flat test site in 1962, seven years after Einstein’s death. So unless ol’ Albert secretly invented time travel, this never happened.