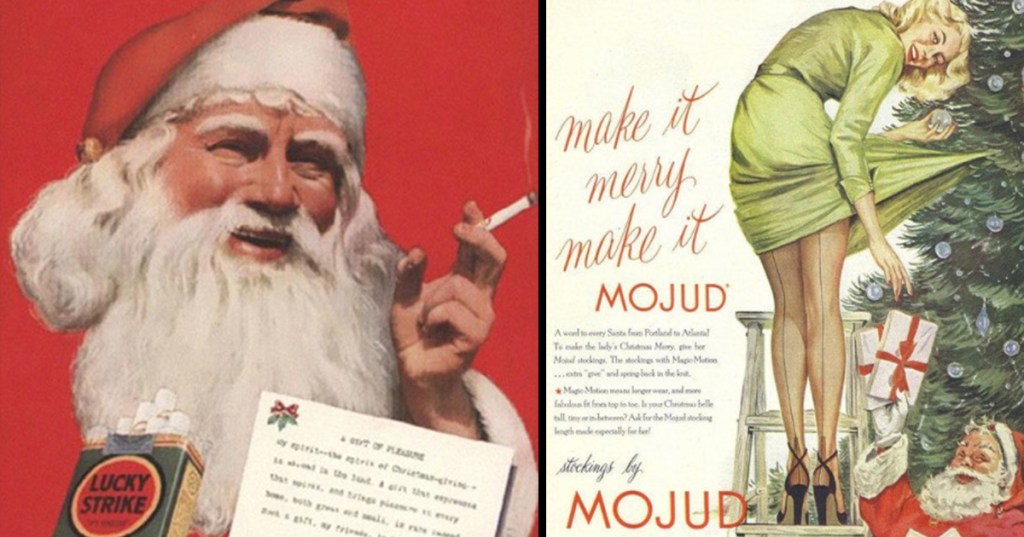 15 Vintage Christmas Ads That Are Guaranteed To Offend You

What gets you into the holiday spirit? Maybe it’s the first time you hear holiday music in a department store. Or maybe it’s eating or drinking your favorite holiday treat, like peppermint bark. Or maybe it’s picking out a Christmas tree and hauling it home strapped to the roof of your car.

Whatever gets you in a December kind of mood, you better keep it handy, because these vintage Christmas ads might ruin your holiday mood for good. Are they sexist? You bet. Did they use Santa in strange and inappropriate ways? Of course. And did I mention they’re sexist? Because hoo boy. Once you’re done going through this article, you’ll be wishing it was mid-June right now. 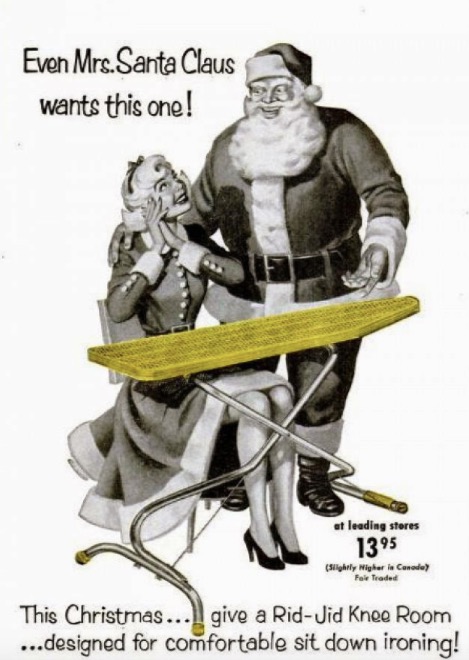 It’s bad enough Mrs. Claus is married to an elf who works one day a year and has a crippling addiction to cookies. Now she gets an ironing board for a gift? #FreeMrsClaus. 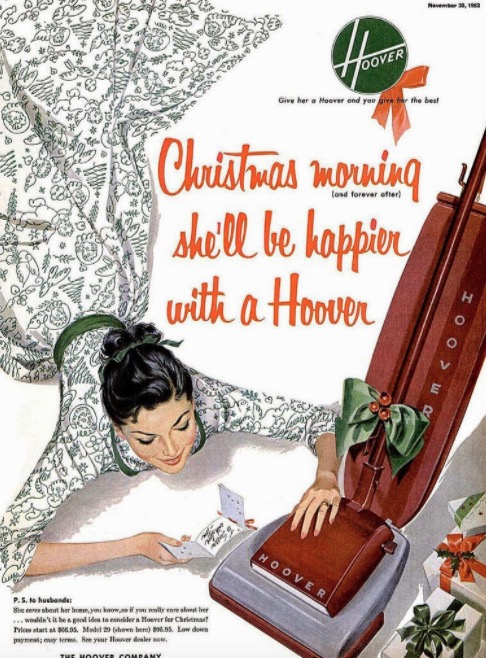 “Merry Christmas! I got you a symbol of the patriarchy! ”

3. Hey, ladies! Now you get to CHOOSE your appliance! 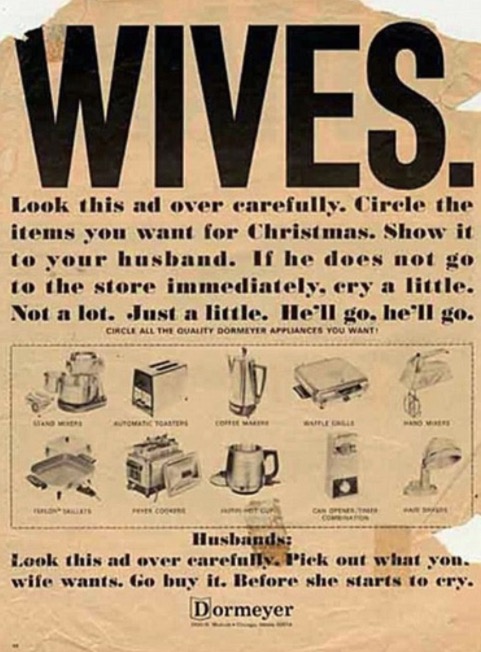 You know, it’s a shame humans can’t hibernate. If they could, women could have skipped all of this B.S. and slept throuh the entire month of December.

But let’s move off the sexist ones for now and move on to some other ways to ruin Santa forever.

4. Getting sexy with Santa. 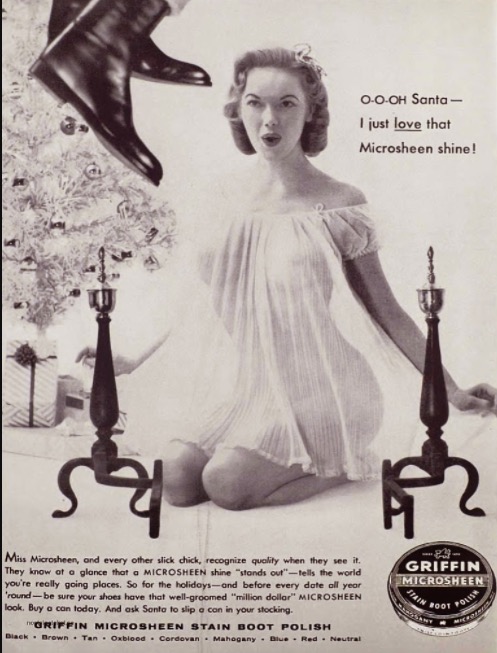 WHYYYYYYYYY?! Why would they do this to Santa?!

Santa is on an exclusive list I call “People I Never Want To Imagine Having Sex,” which also includes my grandparents, Mr. Rogers, and Abraham Lincoln. 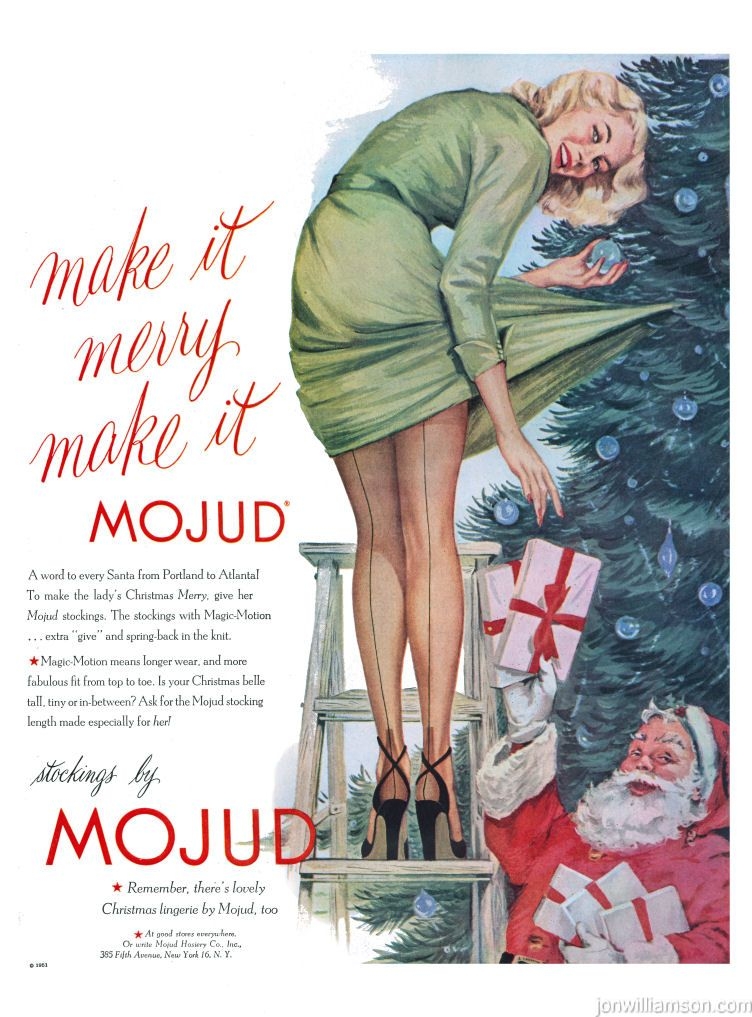 So, who else wants to weld shut their fireplace? Just me?

But anyway, if you don’t want to think about Santa this way, there are plenty of other Santa ads to upset you, like this next one…

To be fair, the job of Santa Claus comes with lots of occupational hazards. A reindeer could kick you in the head. You could develop tinsel lung. The workshop elves could rise up and violently remove you from power. It’s a dangerous gig.

Also, did you notice the part of the ad where Santa and Mrs. Claus give 100% of the credit for putting Christmas together…to the dads? What a load of crap. I guarantee you not one man ever wrapped a gift or baked Christmas cookies prior to the year 1990. 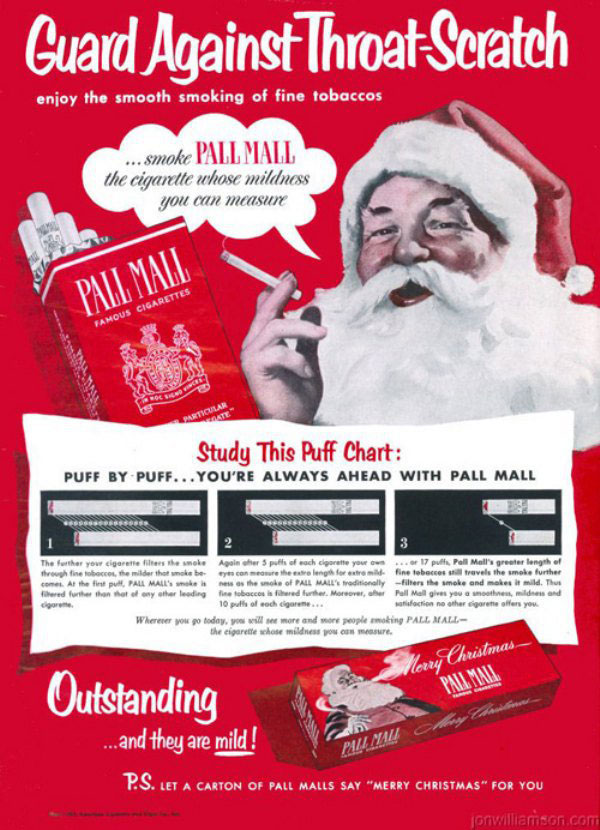 If you’ve ever seen a movie or a TV show from the middle of the 20th century, you know that literally every person was smoking in them, even kids and pets. So it should be no surprise to see that Jolly Old Saint Nick likes a puff. Delivering billions of presents around the world in one night is stressful! 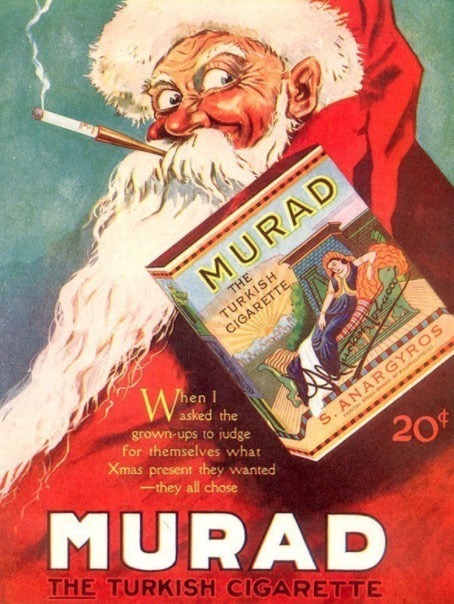 Based on how Santa looks in this ad, I’d say Murad’s Turkish Cigarettes are made with 100% pure PCP. 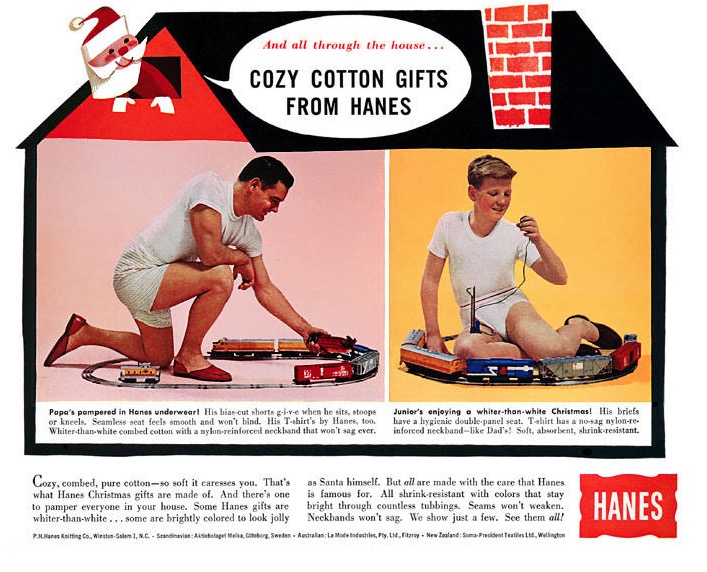 I’m going to look past the whole “underwear train party” thing going on here and focus on what’s really weird about this ad: the idea that boys would think their dad’s underwear is cool. Maybe on bizarro world, Hanes. 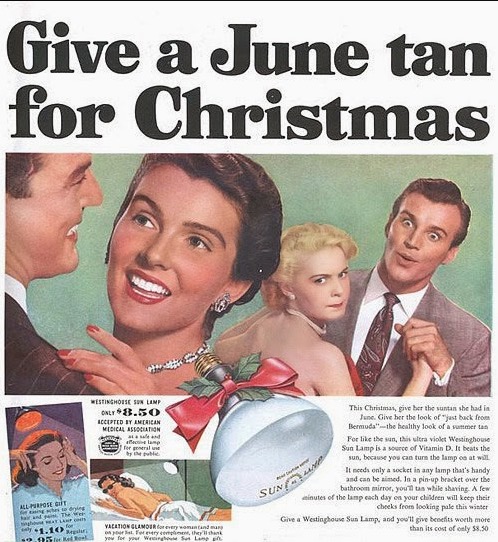 Hey, ladies! Here’s a fun tanning lamp you can buy to give yourself an all-year tan, and if you don’t, your husband will immediately sleep with a woman who did buy one. 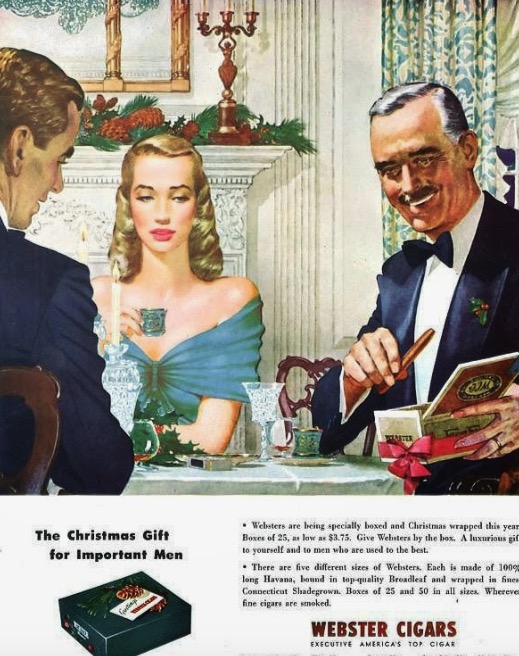 Sure, you could have all the people in your ad look like they’re having fun. Or, you could be like Webster Cigars. She looks like she would rather eat that entire box of cigars than spend one more minute listening to that “important man.”

12. The gift of (someone else’s) happiness 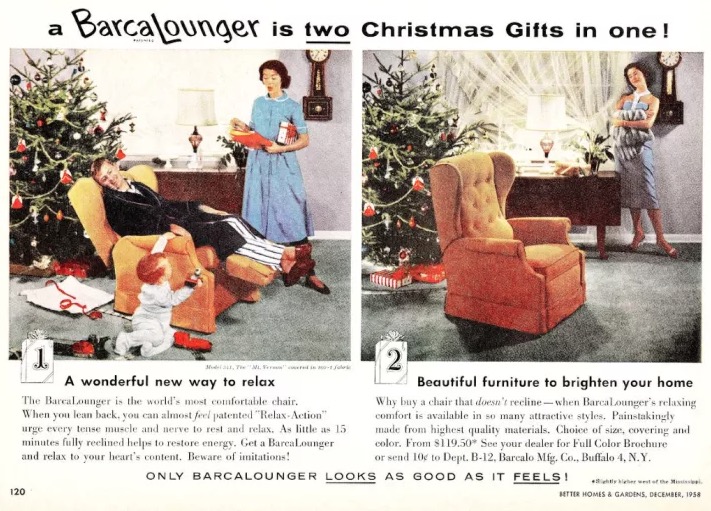 Barca loungers look great AND feel great. Too bad women aren’t allowed to sit in them! 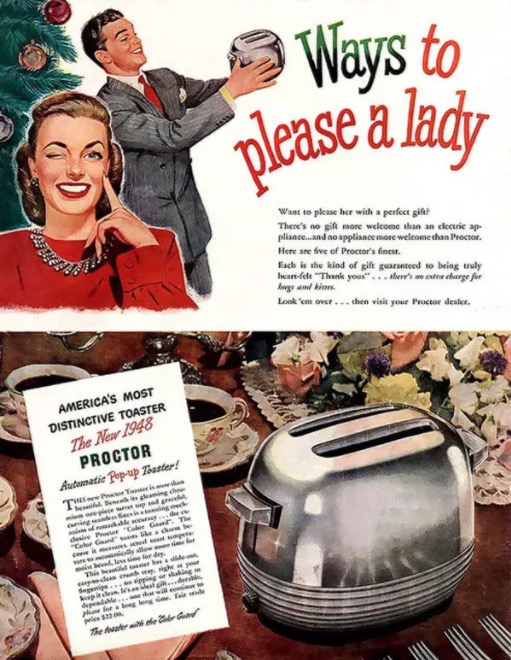 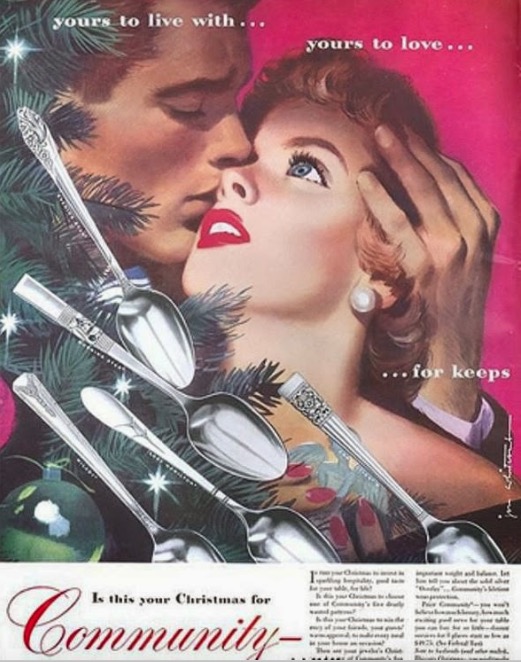 What a coincidence! I just got my girlfriend her Christmas gift, a brand new set of fancy cocaine spoons. 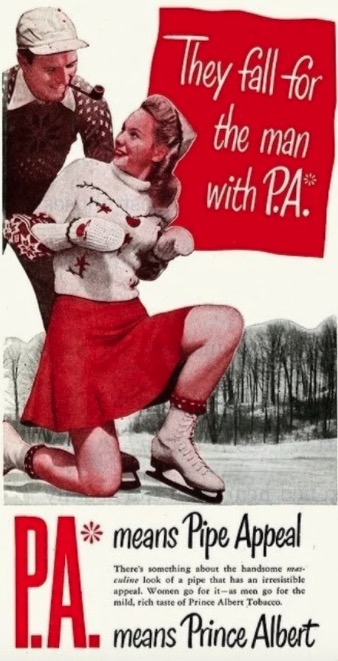