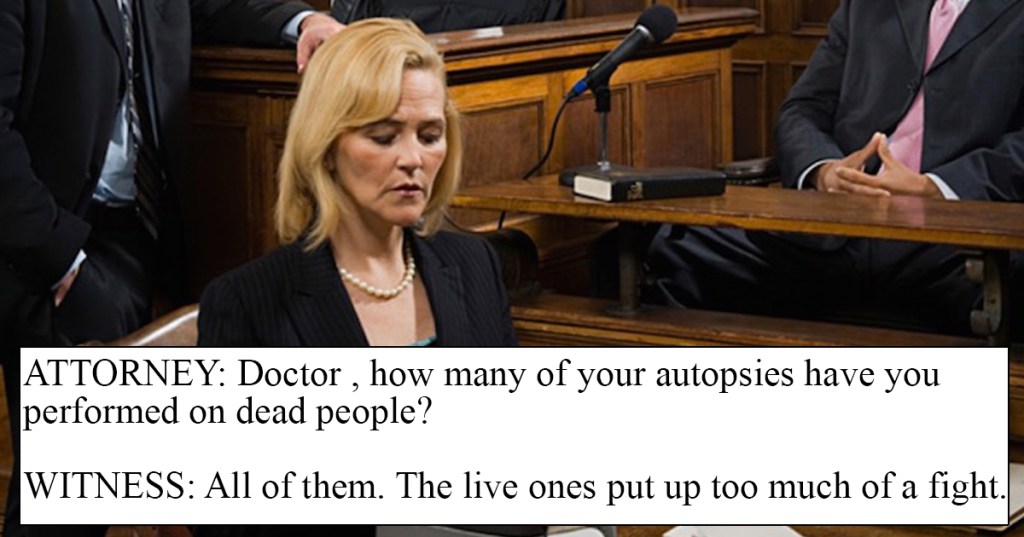 15 Of The Most Ridiculous Things People Have Said In Courtrooms

If you’re in the mood to see gut-busting live comedy, where would you go? Probably a club that features standup. Or a theater that offers sketch or improv shows. Maybe there’s a funny musical or play in town. You probably wouldn’t think of your local courtroom. But maybe you should!

Charles M. Sevillia has been collecting the most ridiculous things uttered in courtrooms around the country since 1999, and compiling them in a book series that began with the classic Disorder in the Court. Below are some of the choicest exchanges uttered in real courtrooms and transcribed by real court reporters. With so much confusion, miscommunication, and outright stupidity, it’s amazing that justice ever gets served.

2. But what about zombies?

ATTORNEY: Doctor , how many of your autopsies have you performed on dead people?
WITNESS: All of them. The live ones put up too much of a fight.

ATTORNEY: What gear were you in at the moment of the impact?
WITNESS: Gucci sweats and Reeboks.

THE ACCUSED, REPRESENTING HIMSELF: Did you get a good look at my face when I took your purse?

(He was later found guilty and sentenced to ten years in jail.)

5. Not the bearded lady.

ATTORNEY: Can you describe the individual?
WITNESS: He was about medium height and had a beard
ATTORNEY: Was this a male or a female?
WITNESS: Unless the Circus was in town I’m going with male.

7. Ask a stupid question, get a stupid answer.

ATTORNEY: Now doctor, isn’t it true that when a person dies in his sleep, he doesn’t know about it until the next morning?
WITNESS: Did you actually pass the bar exam?

ATTORNEY: What was the first thing your husband said to you when he woke that morning?
WITNESS: He said, ‘Where am I, Cathy?’
ATTORNEY: And why did that upset you?
WITNESS: My name is Susan.

9. I think we have our answer.

ATTORNEY: Sir, what is your IQ?
WITNESS: Well, I can see pretty well, I think.

ATTORNEY:Did you blow your horn or anything?
WITNESS: After the accident?
ATTORNEY: Before the accident.
WITNESS: Sure, I played for ten years. I even went to school for it.

ATTORNEY: Are you sexually active?
WITNESS: No, I just lie there.

ATTORNEY: How far apart were the vehicles at the time of the collision?

15. And finally, the showstopper.