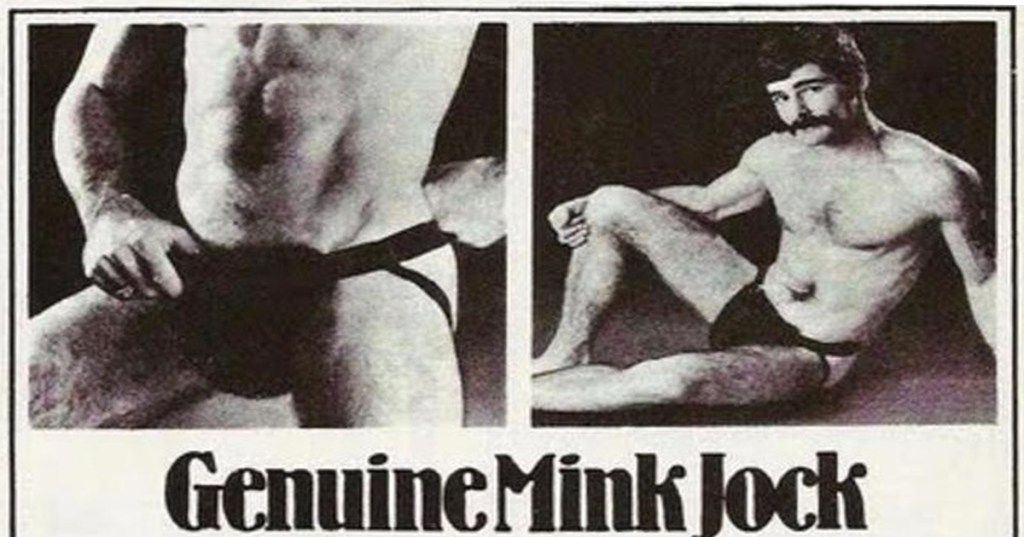 If we were to rank the advertising for every possible product possible products in terms of awkwardness, men’s underwear ads would have to be among the most awkward. Men’s underwear is generally not considered a sexy subject in the first place, and there are only about six dudes in the entire world who can pull off “cool” in just their undies.

But vintage men’s underwear ads were even more awkward than the stuff we have today. Sometimes, it’s the way the ad is presented that’s awkward–so many times, ad agencies just went with “a bunch of guy friends hanging out in their underwear for no reason.” Other times it’s the underwear itself that’s awkward–picture a guy in plaid underwear and a plaid undershirt that’s tucked INTO that underwear. (Apparently this is how every man dressed before 1990.)

Whatever the case, these ads make me wonder why everyone didn’t just go commando. 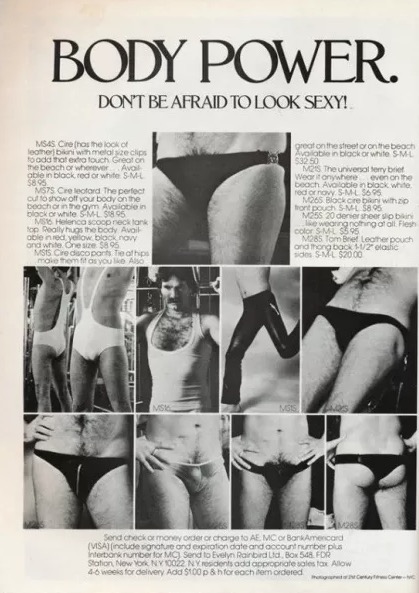 You clicked on an article about men’s underwear ads from the 1970’s, so you had to know there would be body hair, and this is enough body hair to make several sweaters. 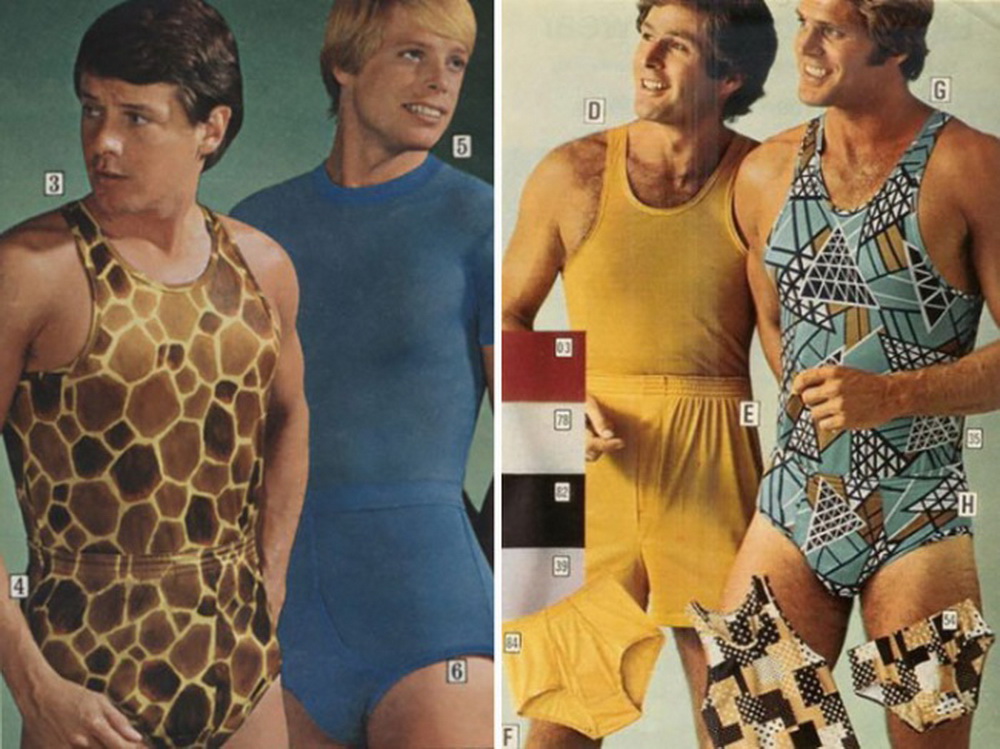 From left to right, these patterns are: Sexy Giraffe, Blue Nightmare, Yellow Nightmare, and What Picasso’s Dog Threw Up After Eating One Of His Paintings. 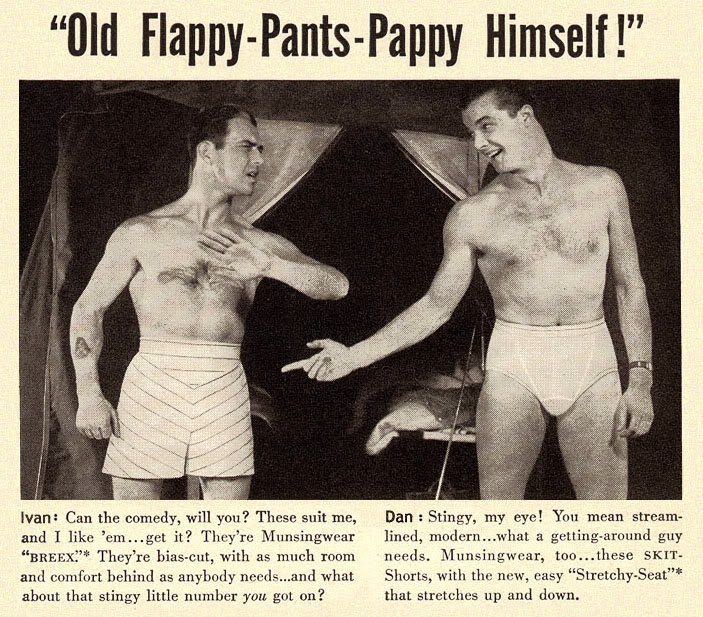 OK, wow. So much to unpack here. 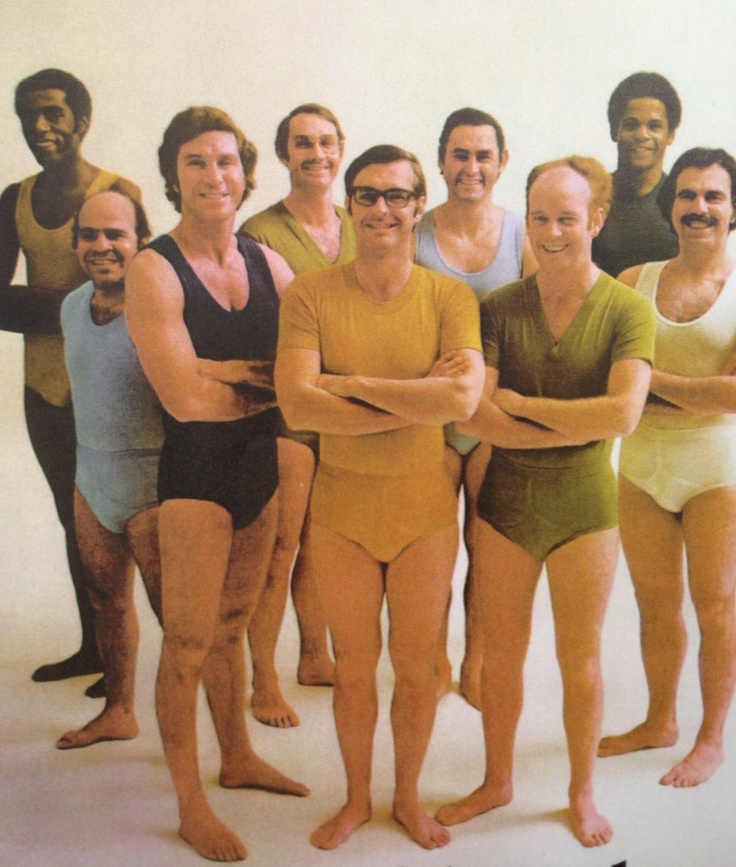 Finally, an underwear ad I can relate to! Because who among us hasn’t gotten eight of their closest friends together and hung out in their underwear? How else do you pass the time during the football offseason?

When I was in college, the best way to impress your pals was to have an Xbox. I am glad I went to college in the 2000’s, and not when this ad was made.

Oh man this takes me back to my childhood, when my Dad and I spent many a Saturday afternoon…eating cake…in nothing but our underwear…and penny loafers. 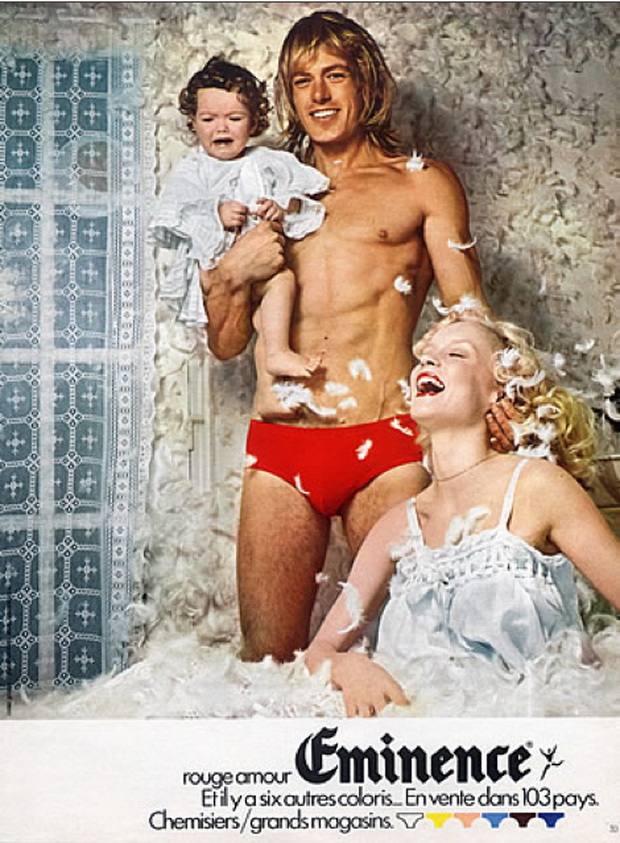 What is even happening in this scene? Did someone just leave the room after getting tarred and feathered? Did someone punch a goose? And how does any of this sell underwear? 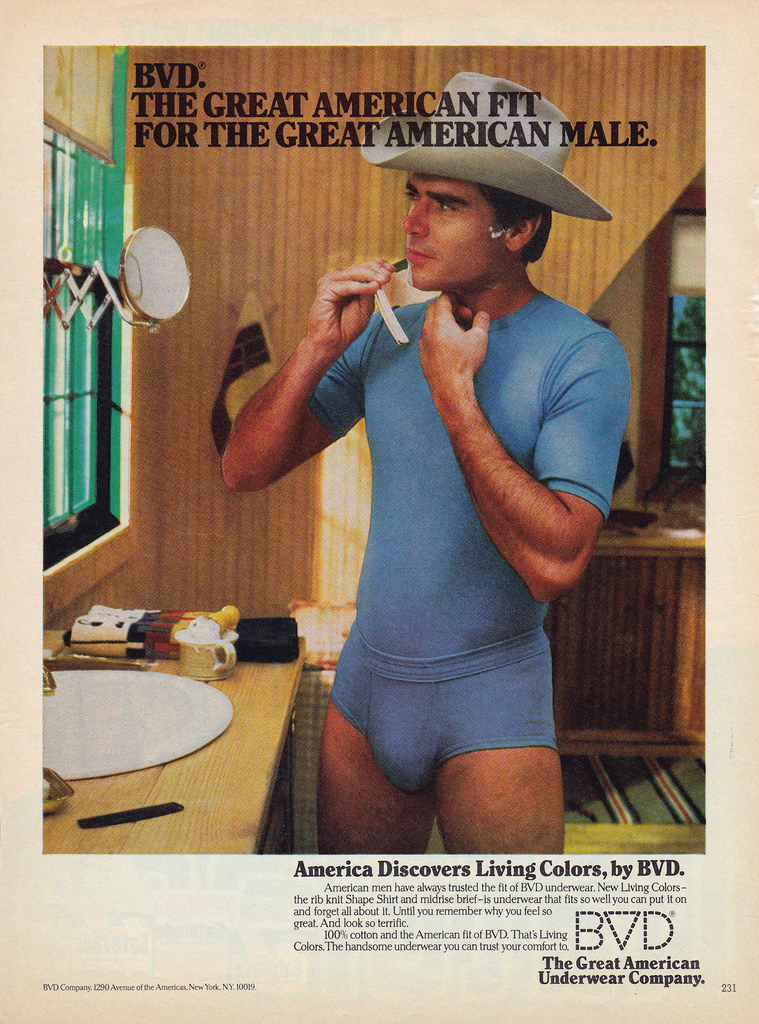 Yeah! He’s so manly he doesn’t remove his cowboy hat even when he’s shaving. In fact, usually he doesn’t even need to shave, he just glares at his facial hair and it retreats back into his face. 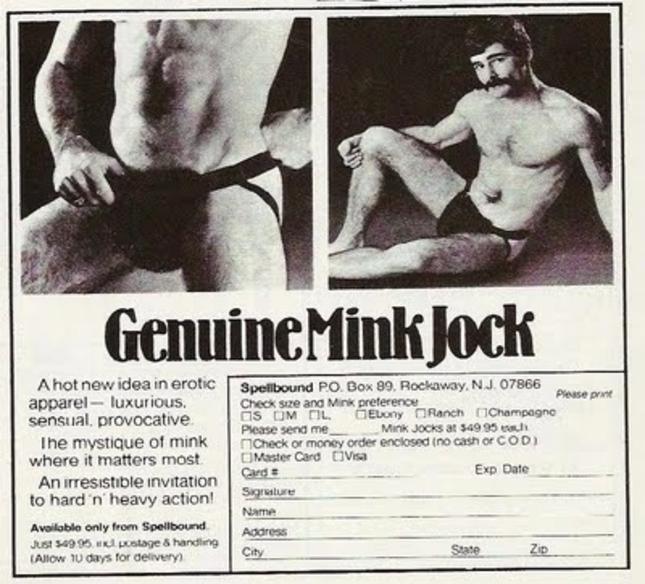 I guess “mink jock” is a sexier name than “animal diaper,” but not by much. 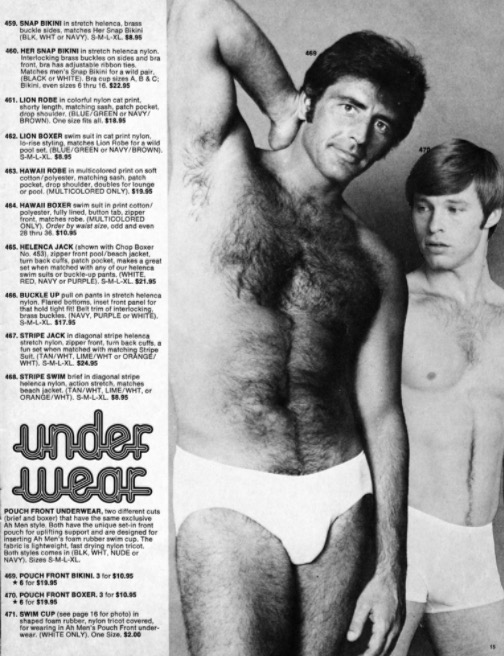 Does this even qualify as an ad any more? 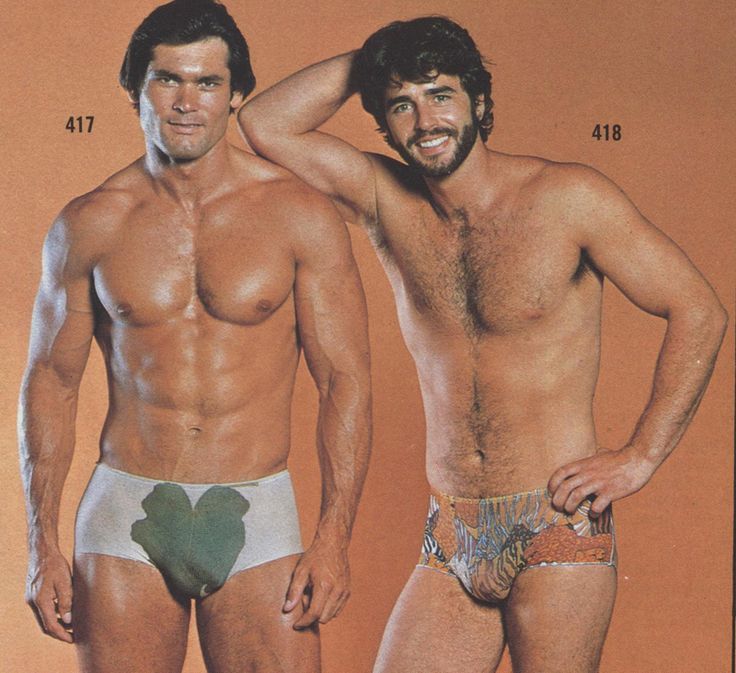 What the hell is going on with the guy on the left’s underwear? Is that a sad attempt at a shamrock? Or does he just have a REALLY unfortunate medical condition? 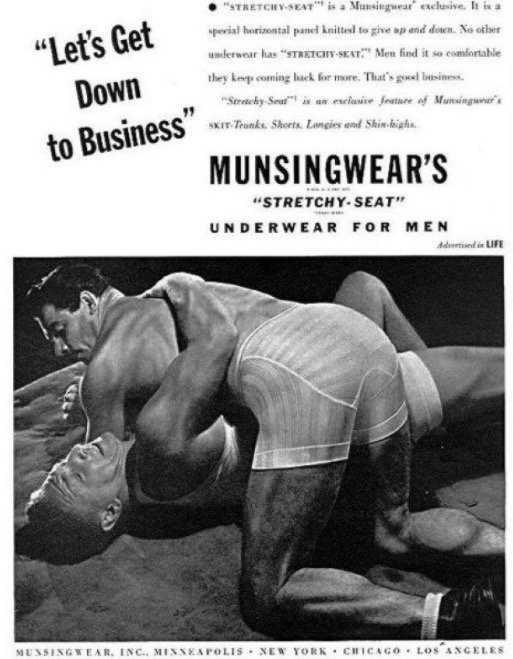 Oops, I beg your pardon. I should have knocked. I’ll leave you two gentlemen alone. 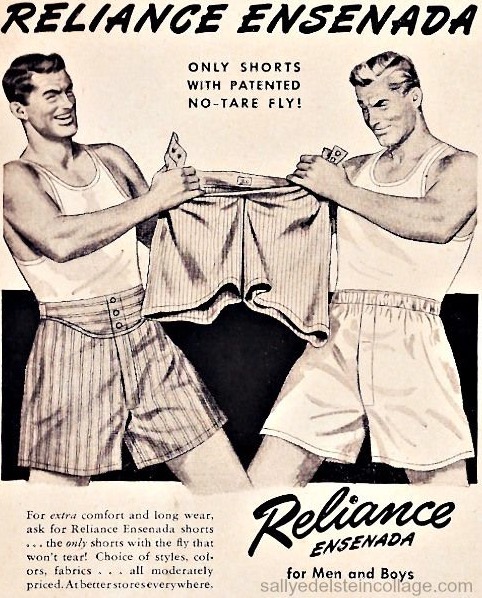 The nice thing about sharing underwear with your friends is, it’s a lot harder for them to prove you have skid marks. 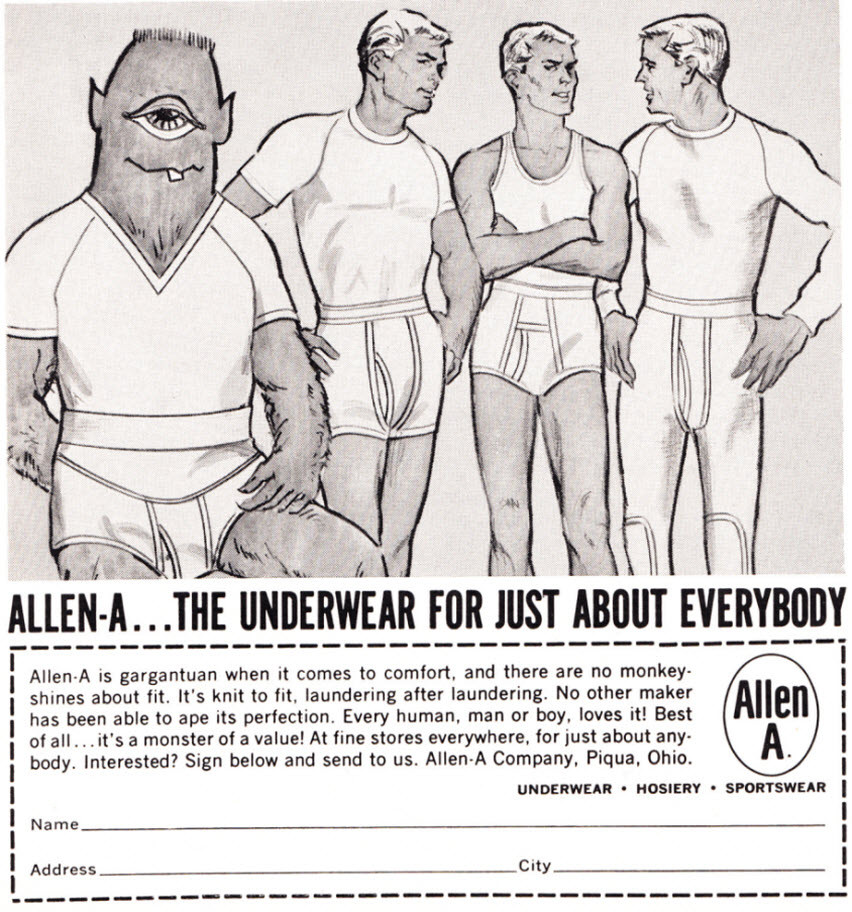 You know what? I just went ahead and added some dialogue to this one… 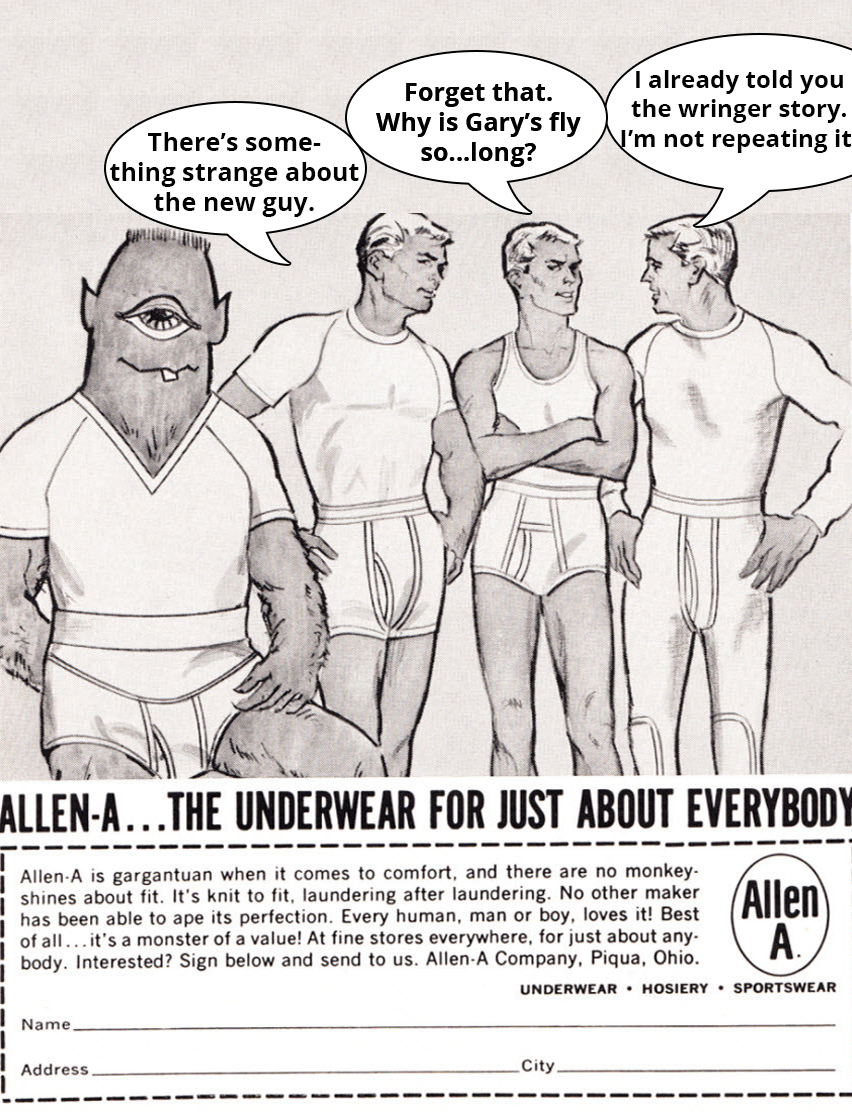