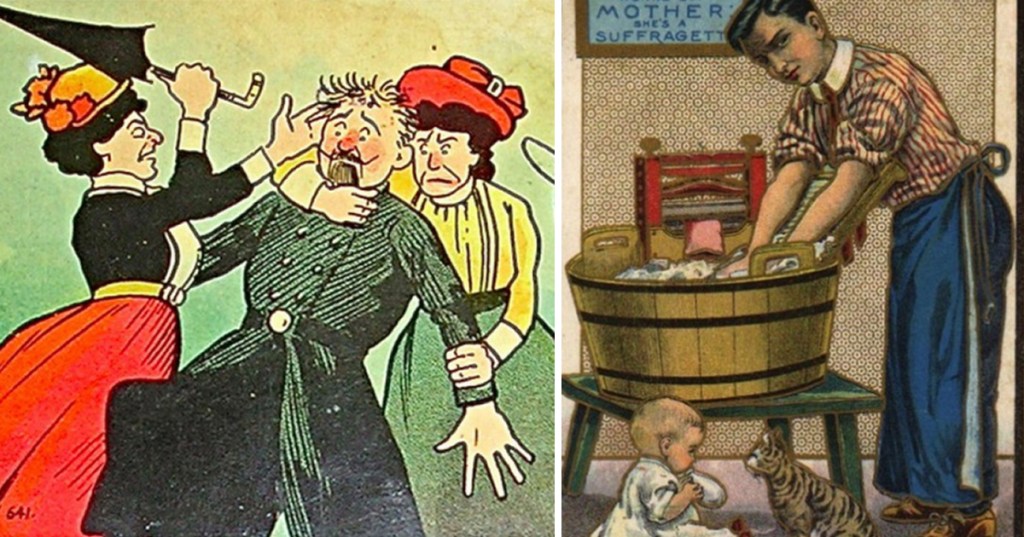 As we all know from history class, American women couldn’t vote until August 26th, 1920, when Congress ratified the 19th Amendment. It’s insane that women couldn’t vote until the 20th century, but what’s also insane is how long it took for the law passed. The women’s suffrage movement started in the 1840’s, and was formally kicked off with the Seneca Falls Convention in 1848. That’s over 70 years of campaigning.

Why did it take so long? As you might expect, men weren’t too thrilled with the idea. They actively opposed the suffragette movement from the very beginning. A whole industry of anti-woman propaganda cropped up to appeal to resistant men, but it went into overdrive in the years leading up to 1920. A lot of this propaganda tried to convince men that women voting was a threat to their very way of life. If women got the vote, men would be forced to take on traditional women’s jobs like housekeeping and raising the children. CAN YOU IMAGINE?!

And of course, those were just the stated reasons for their opposition. The real reasons, as the suffrage movement pointed out constantly, were holding onto power and money.

All this propaganda wasn’t enough to stop progress–but they still tried their best. Check out this selection of bonkers anti-suffrage propaganda, from 1900 to 1914. 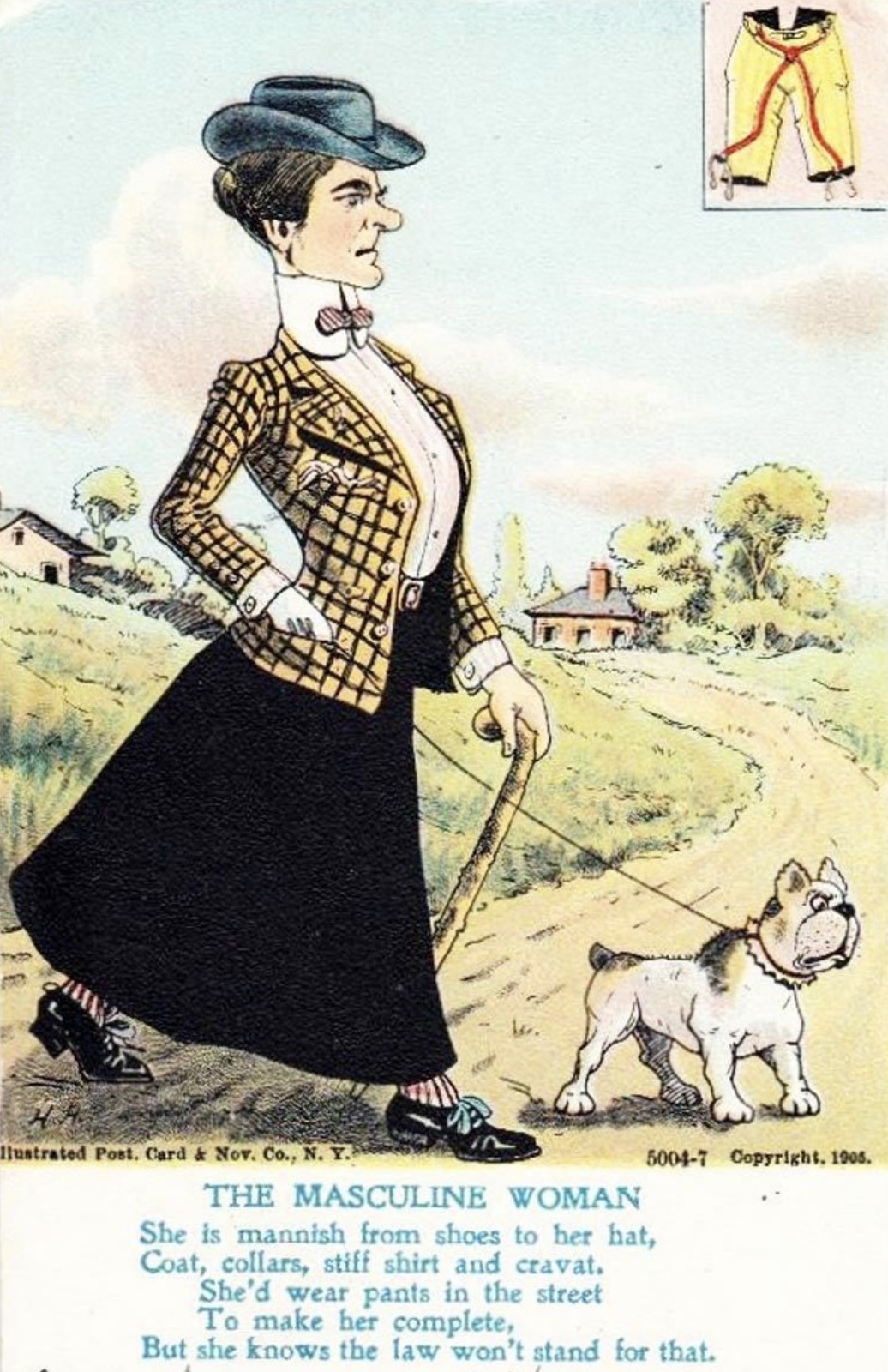 If women vote, they might start…walking dogs! Or even worse, WEARING PANTS!

Also, notice how they couldn’t even show a woman wearing pants. That image would’ve made everyone’s brains melt and leak out of their noses.

2. Those suffragettes are just angry because they’re single. 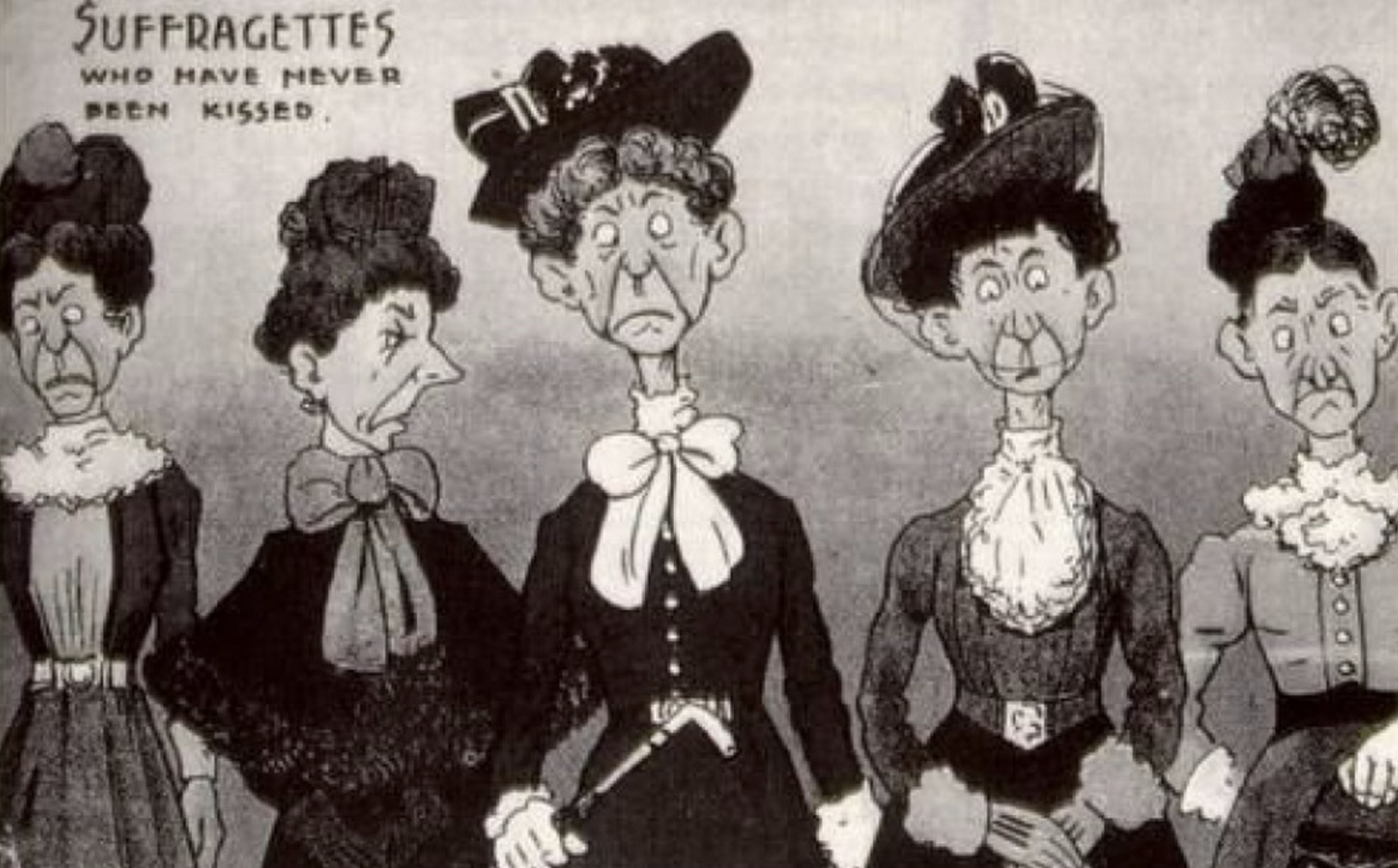 Another way this propaganda worked was to depict suffragettes as bitter old maids who couldn’t get a husband, or even get kissed.

But brushing your teeth with toothpaste didn’t even become a thing until 1920, so maybe they just didn’t want to deal with your buffalo breath.

3. It’s almost like these arguments weren’t based in logic. 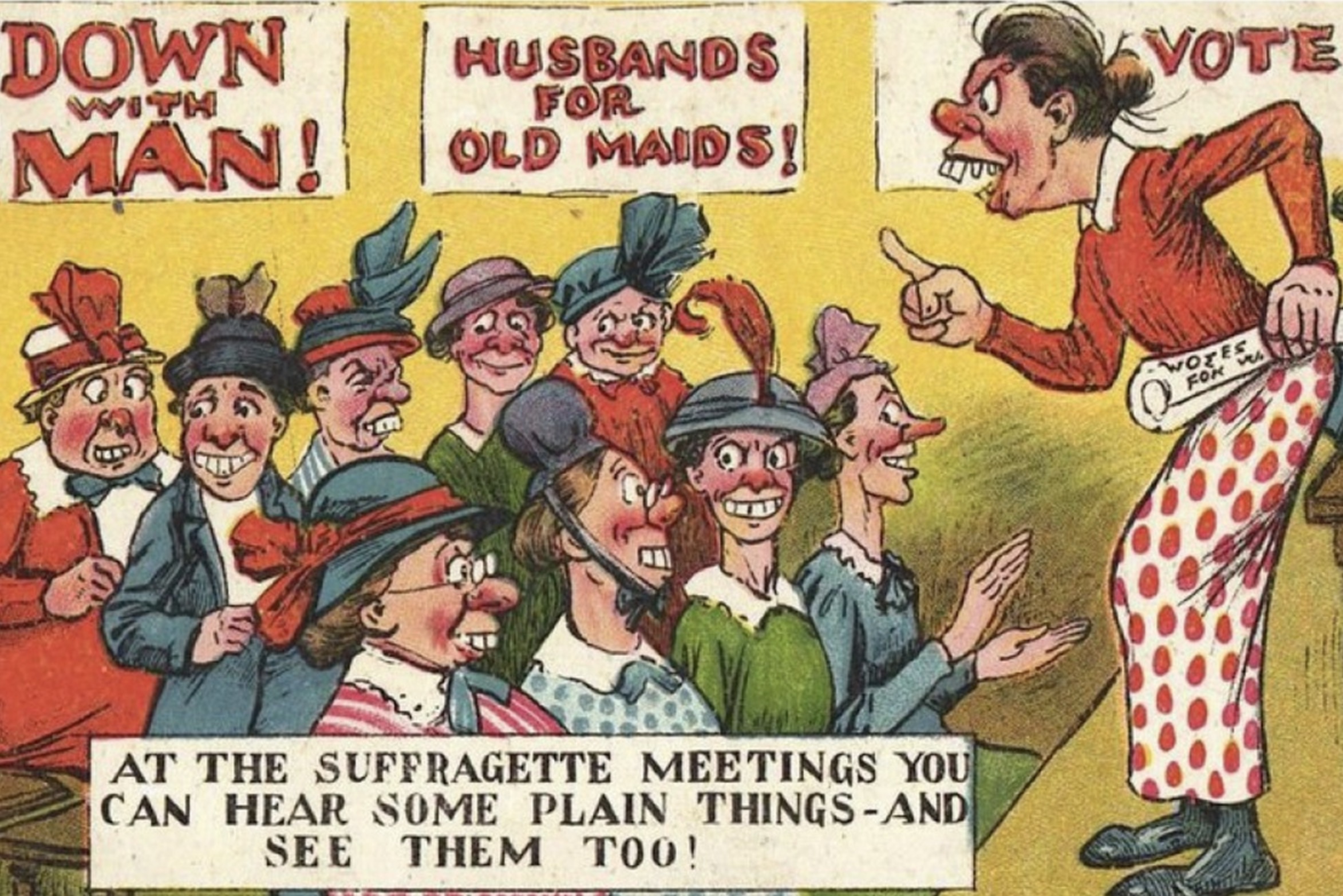 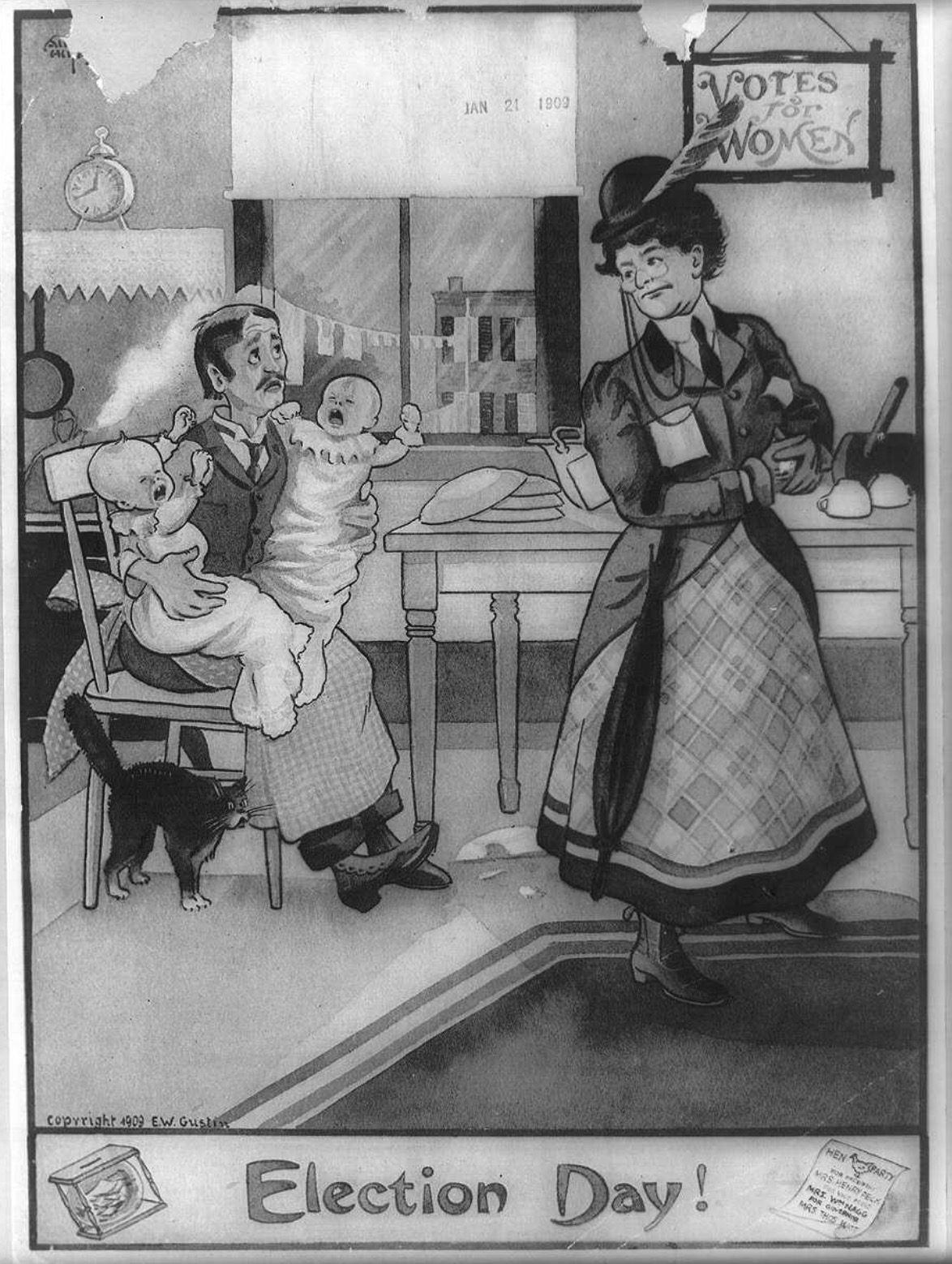 Another common anti-suffrage argument was that women voting would rend the fabric of society. Women would now be able to get jobs, and men would now have to take care of the kids.

We know from science that men are biologically incapable of taking care of an infant. Like, what do you even do with them? Plug them into a wall outlet? Toss them like frisbees? Help.

5. How do you even feed these things? 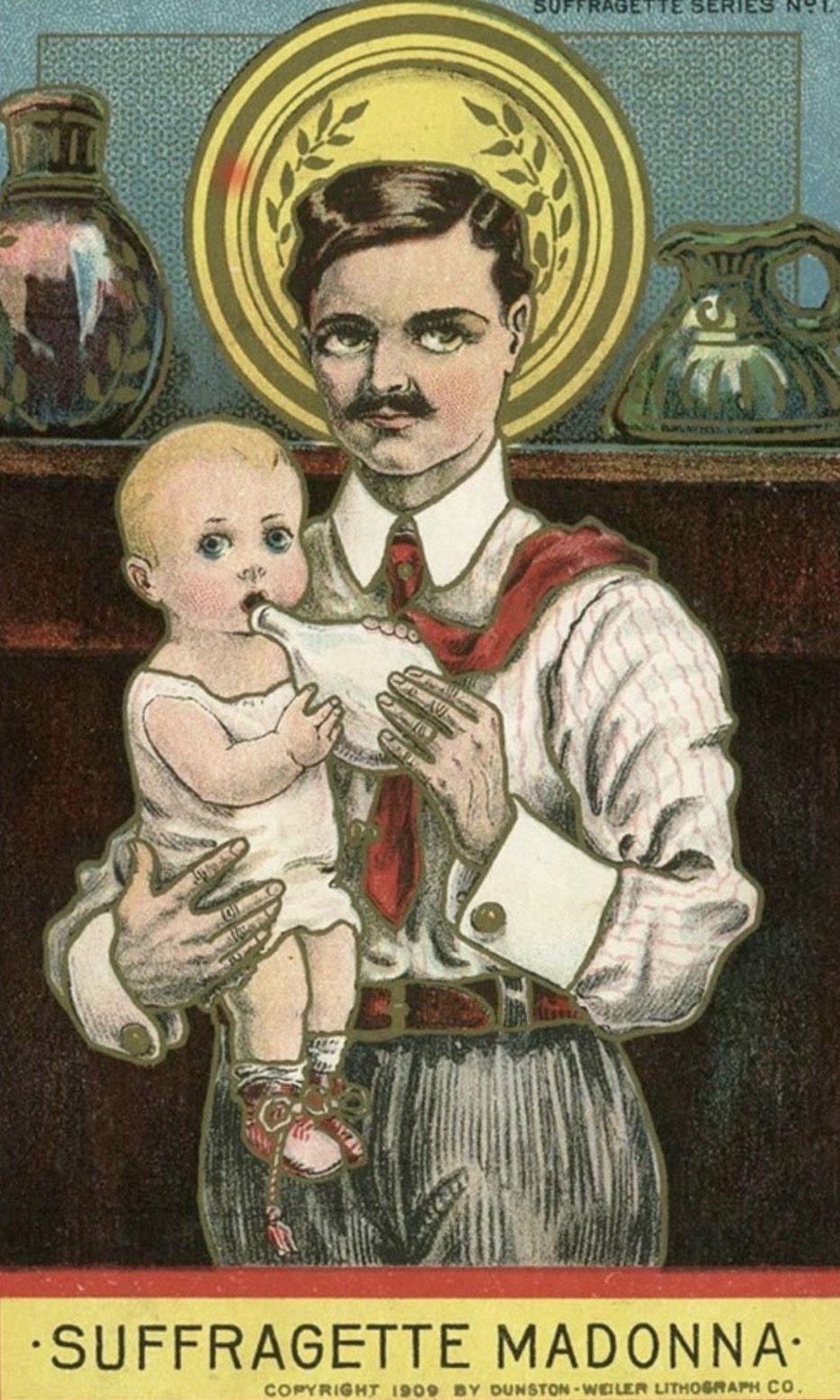 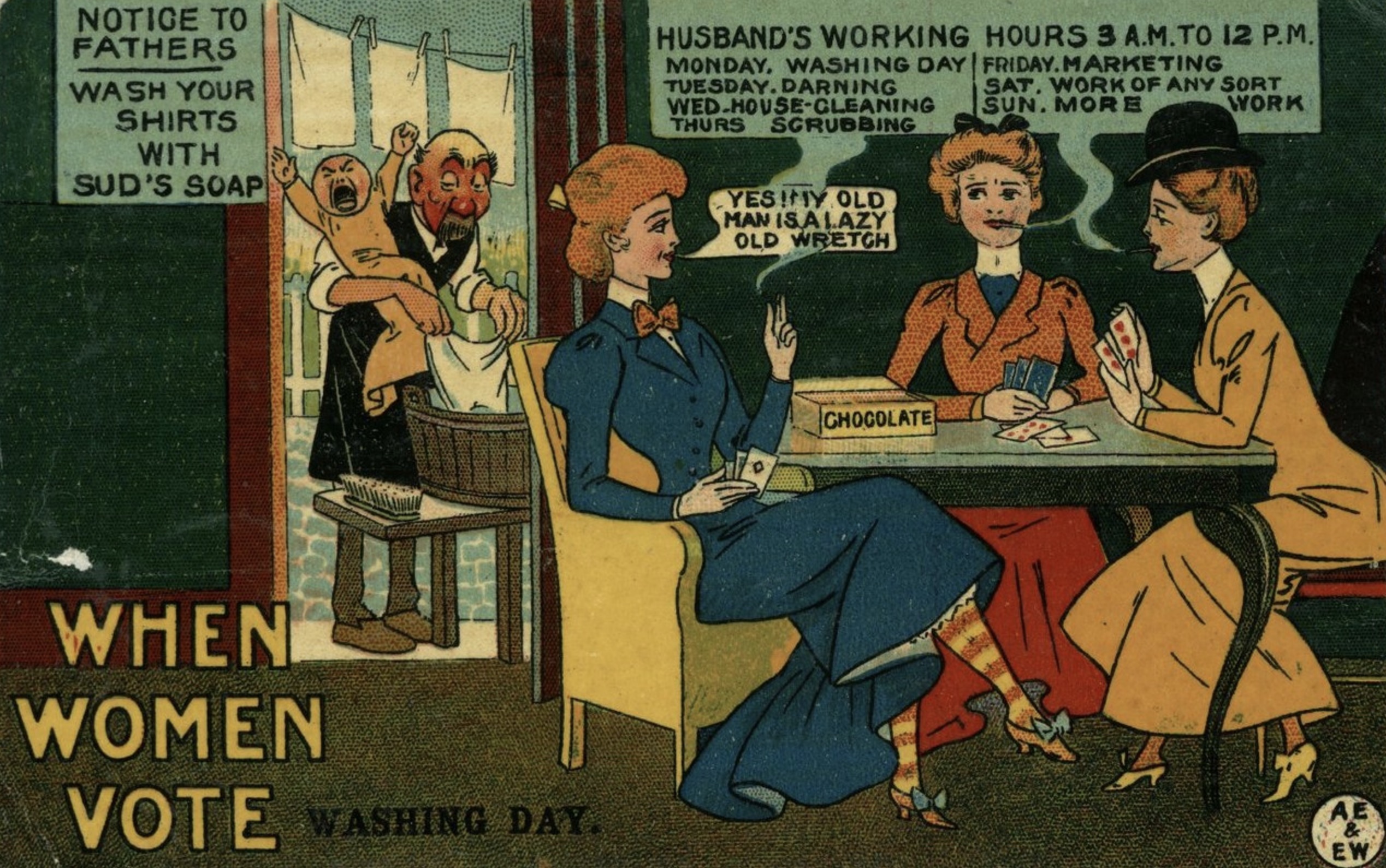 Once women got the vote, men thought, they would sit around all day smoking, playing cards, and eating bon bons–leaving the man to take care of the house!

I like how this one also has product placement. They’re basically saying, “Hey fellow men, none of us want to do housework, but if you have to, make sure you buy our soap. Sud’s Soap.”

7. So much laundry anxiety. 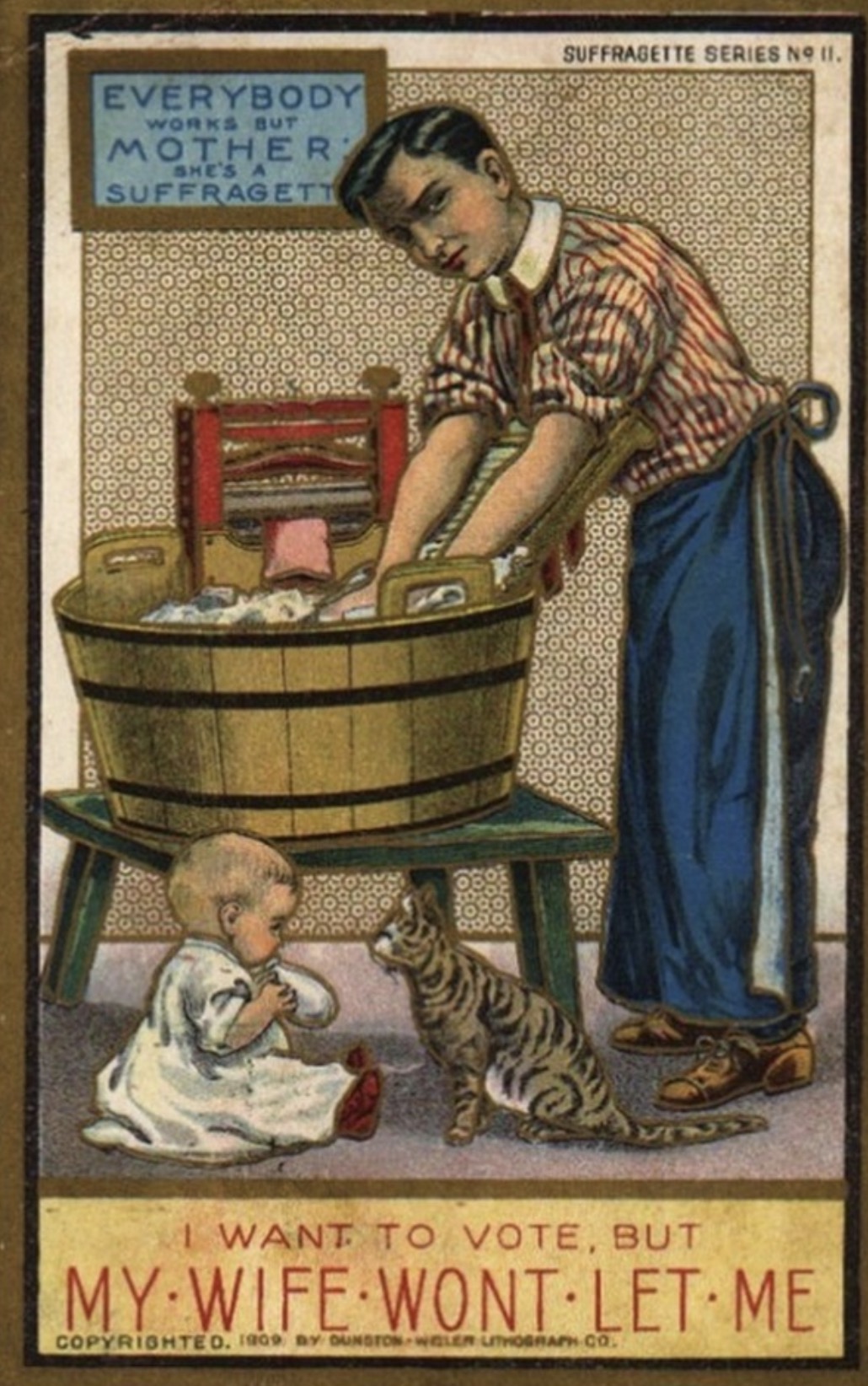 Apparently men were terrified of washing their clothes. I get that. Nothing’s scarier than your own skid marks.

8. Or maybe those suffragettes will just beat us up! 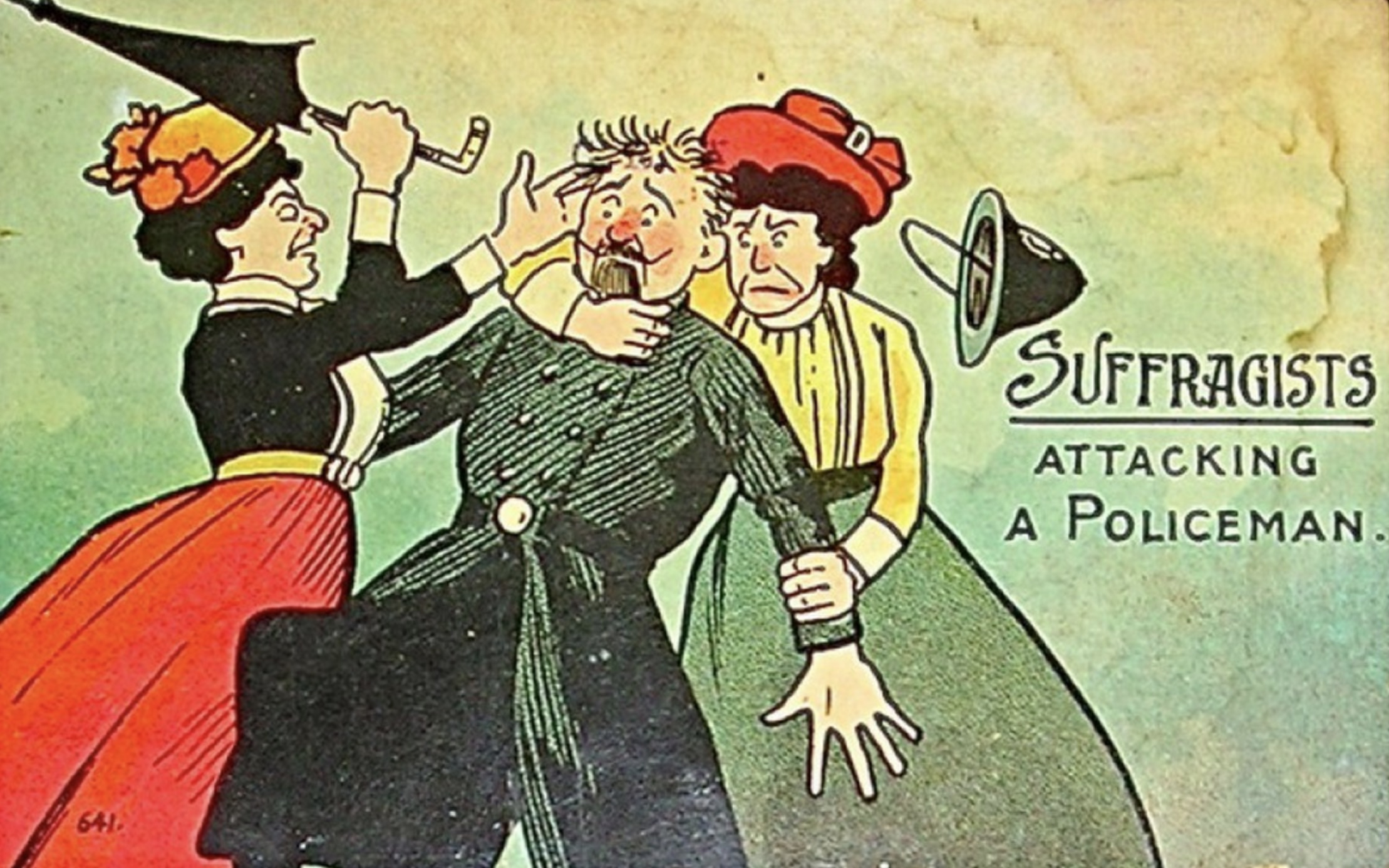 Some factions of the suffragette movement did endorse acts of violence to combat their oppression. You won’t be surprised to learn that propagandist used these incidents to paint ALL suffragettes as vicious monsters, all while conveniently leaving out the history of police brutality and mob violence against the suffragettes.

9. Wait, did I say they left out violence against suffragettes? I meant they actively endorsed it. 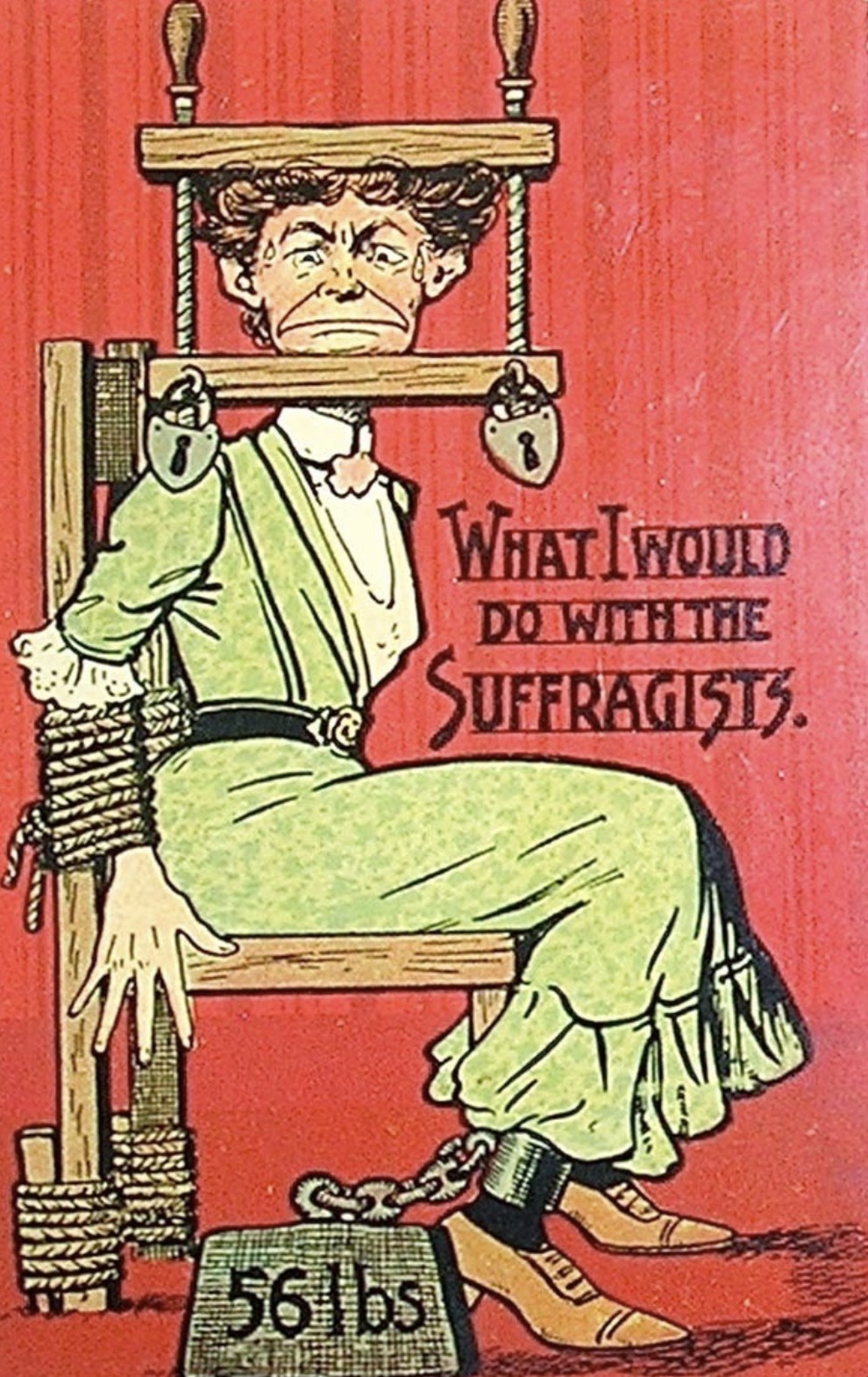 So, just to recap: suffragettes are violent brutes, which is why we have to beat them up and literally lock their jaws shut. Got it? Cool. 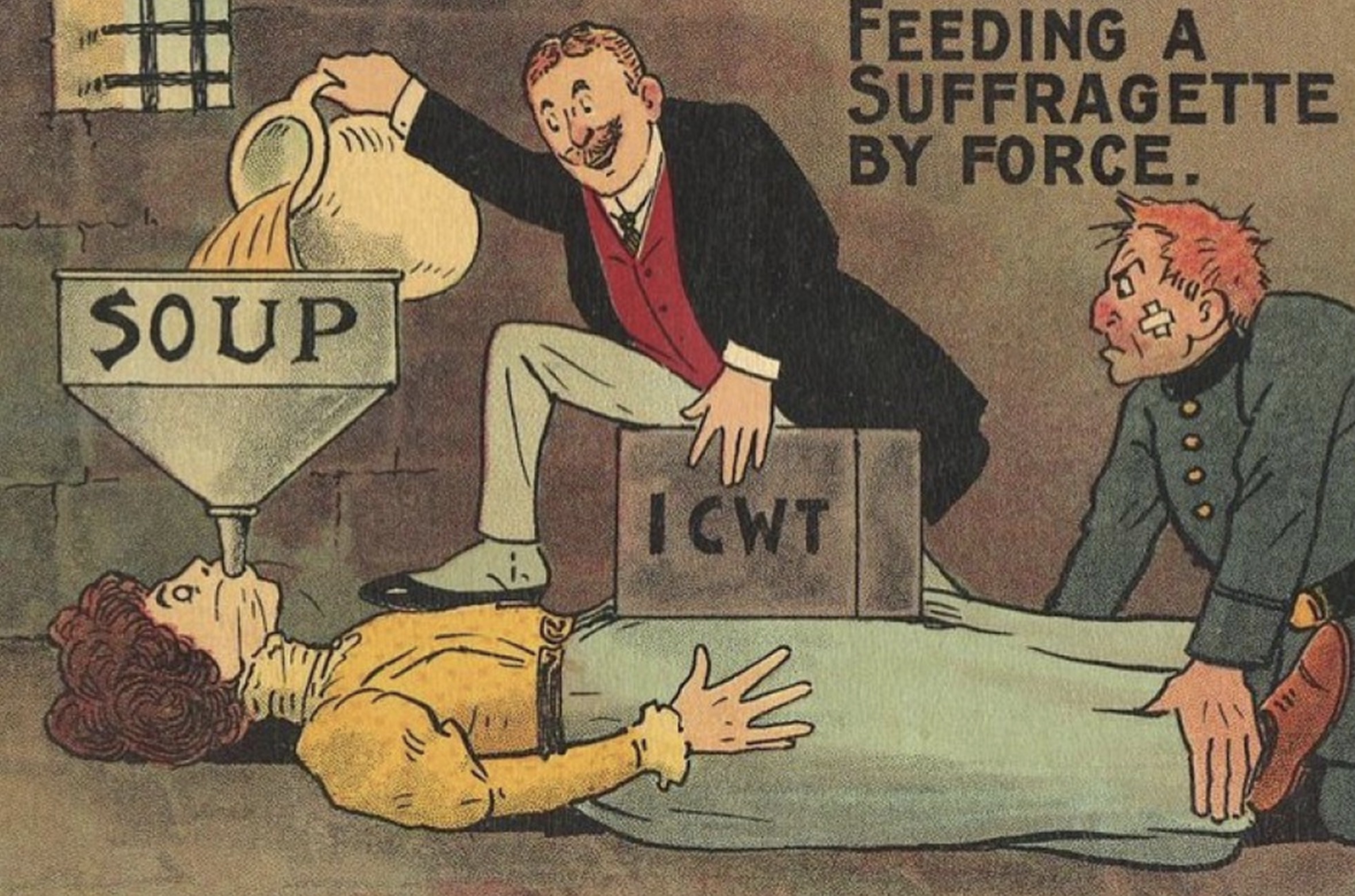 This one isn’t even an exaggeration. Suffragettes around the world were imprisoned and force fed, like Sylvia Pankhurst and Mary Richardson. 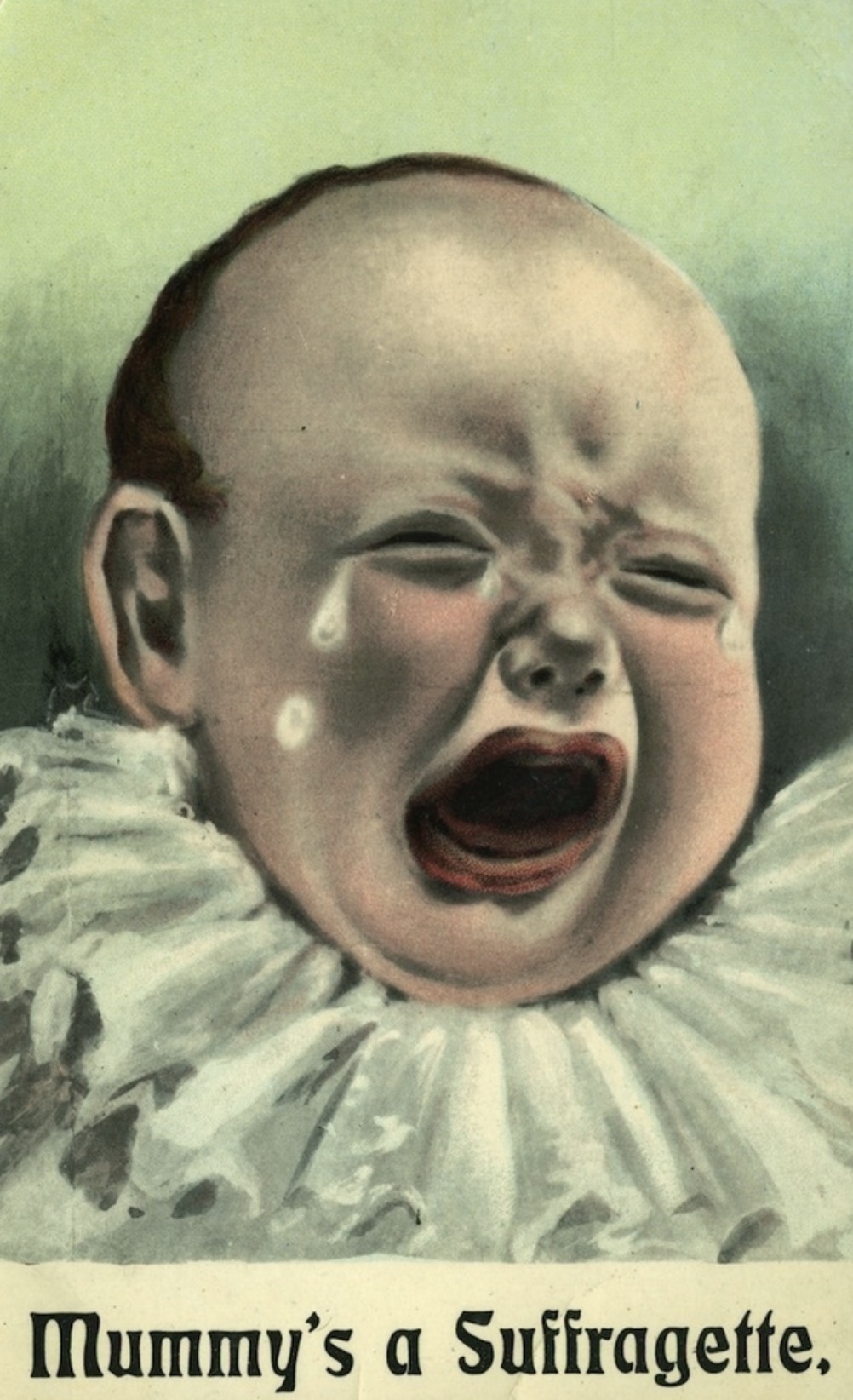 Babies don’t understand democracy. Did you learn nothing from our country’s ill fated experiment with Baby Congress?!

12. Why does women voting make me mad AND turn me on?! 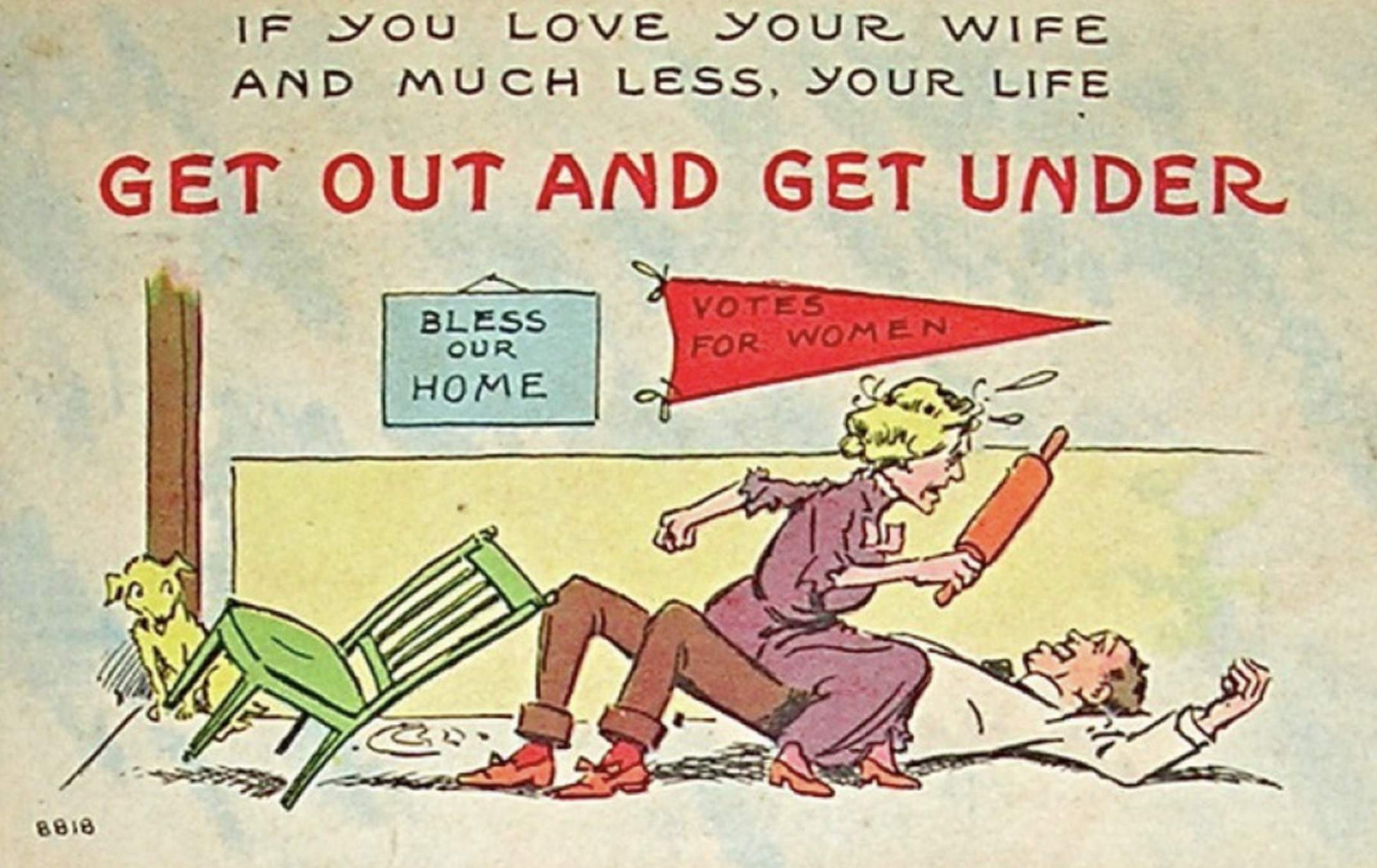 I mean, could it be any more obvious? 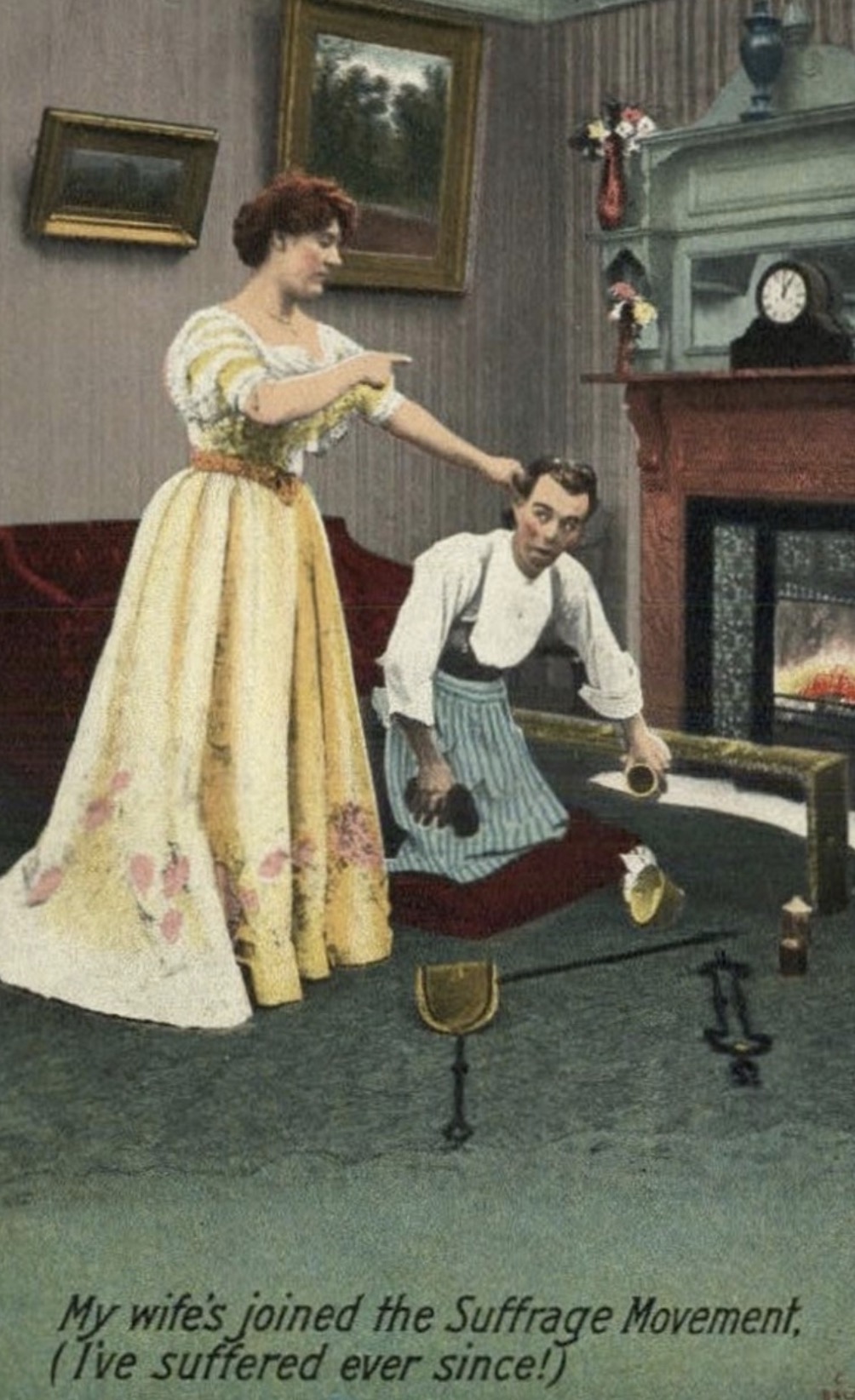 I’m sure this exact scene happened at every anti-suffrage meeting.

MAN AT MEETING: If my wife gets to vote, next thing you know she’ll spank me! And I might even like it! Is that weird! Guys? Where are you going? 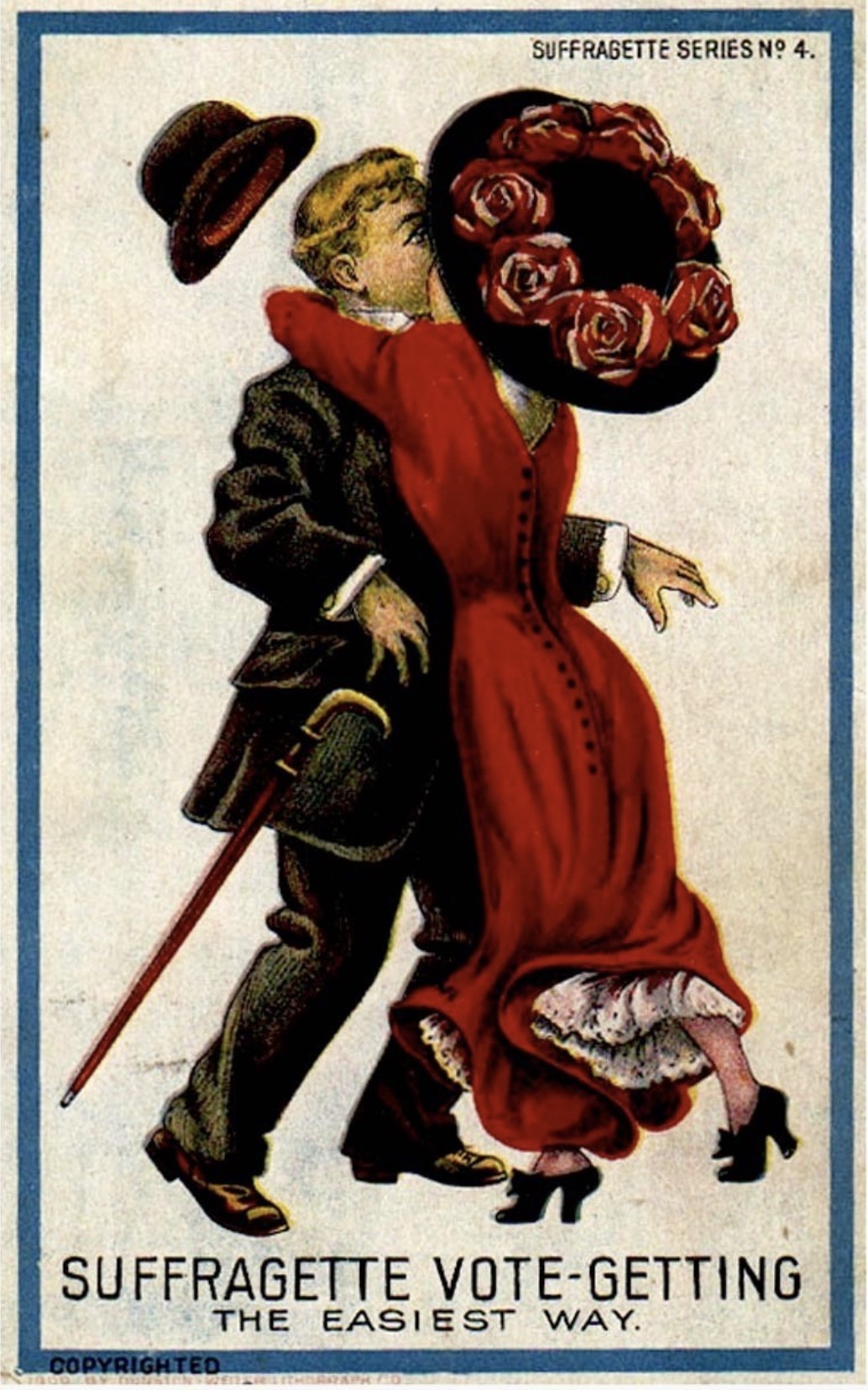 ANOTHER MAN AT THE SAME MEETING: I hear they’re trying to get the vote by making out with random guys! Or, I’d like them to. I think? I gotta be honest, I’ve had a lot of opium today.

15. And finally, here’s one from the other side of the argument.