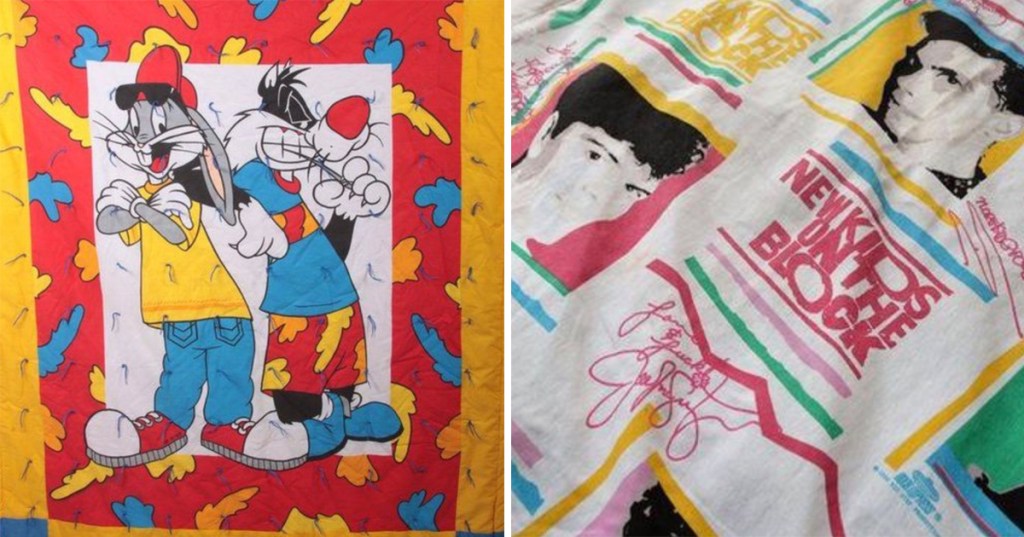 What’s the best way show your allegiance to something? Themed bed sheets! If you want to know what’s most important to a child, simply ask them what kind of sheets they sleep on. In fact, I’m not sure why children are the only ones who sleep in themed bedsheets. Adults should sleep on sheets of their favorite things, like their company logo or or their favorite beer or their favorite pharmacy.

Cartoon bed sheets didn’t start in the 1990’s, but the 90’s were definitely the cartoon bed sheet’s heyday. Thanks to licensing agreements and advanced printing techniques, 90’s kids could sleep on sheets with pretty much any character wanted.

Scroll down and check out some of the heavy hitters. They definitely won’t be showing up in the Sears catalogue, but you can still find many of them on the Internet. Just in time for your midlife crisis! 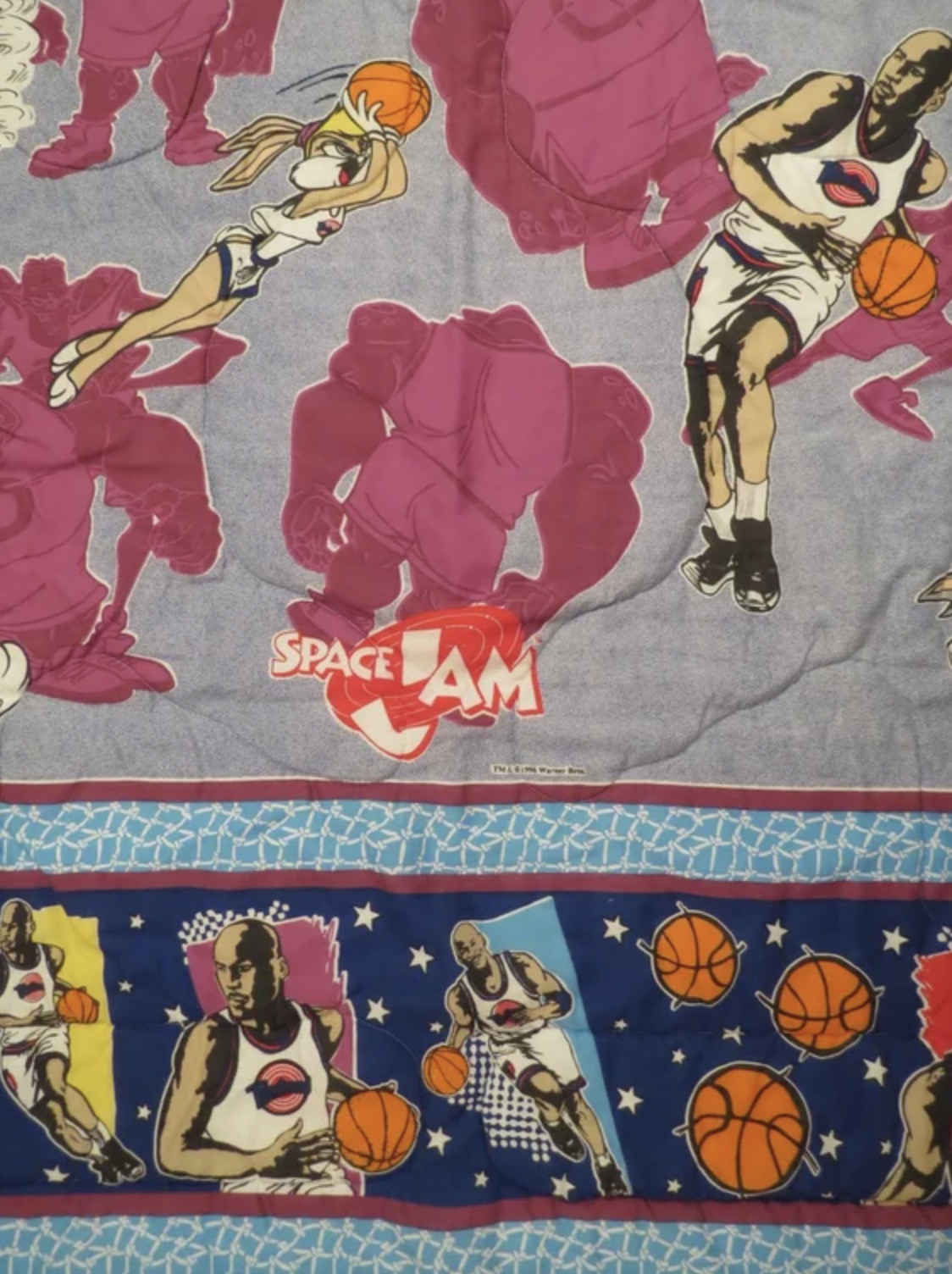 It’s impossible to write a listicle about the 90’s without mentioning Space Jam, the iconic film where Michael Jordan teamed up with the Looney Tunes to challenge a bunch of space monsters to a basketball game. Did you know the movie started out as a commercial? 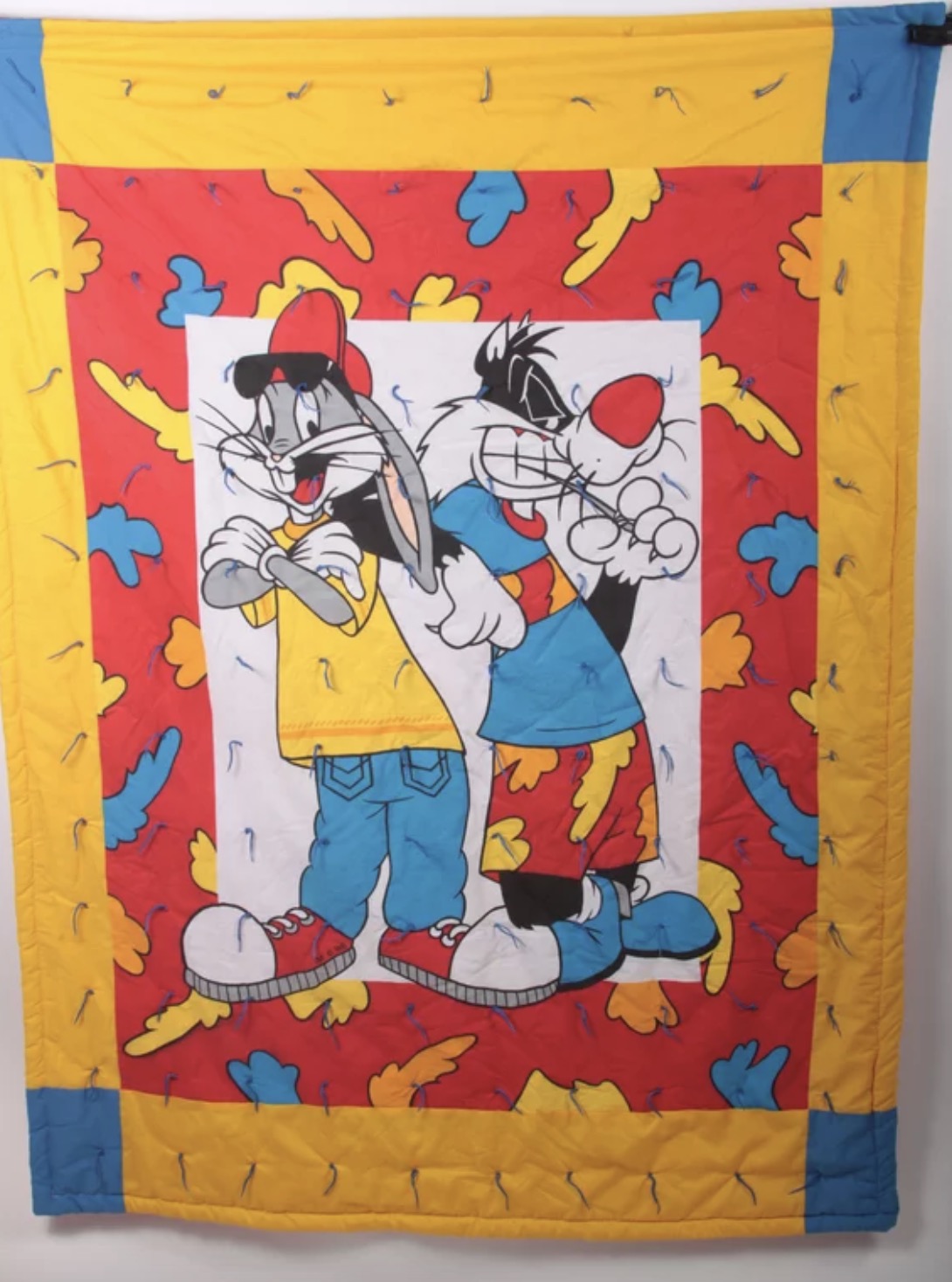 Question: how do you make a beloved cartoon character based entirely on the comedic stylings of Groucho Marx more relatable to modern children? Give him a hip hop makeover, of course! The less said about Kriss Kross Bug Bunny, the better. 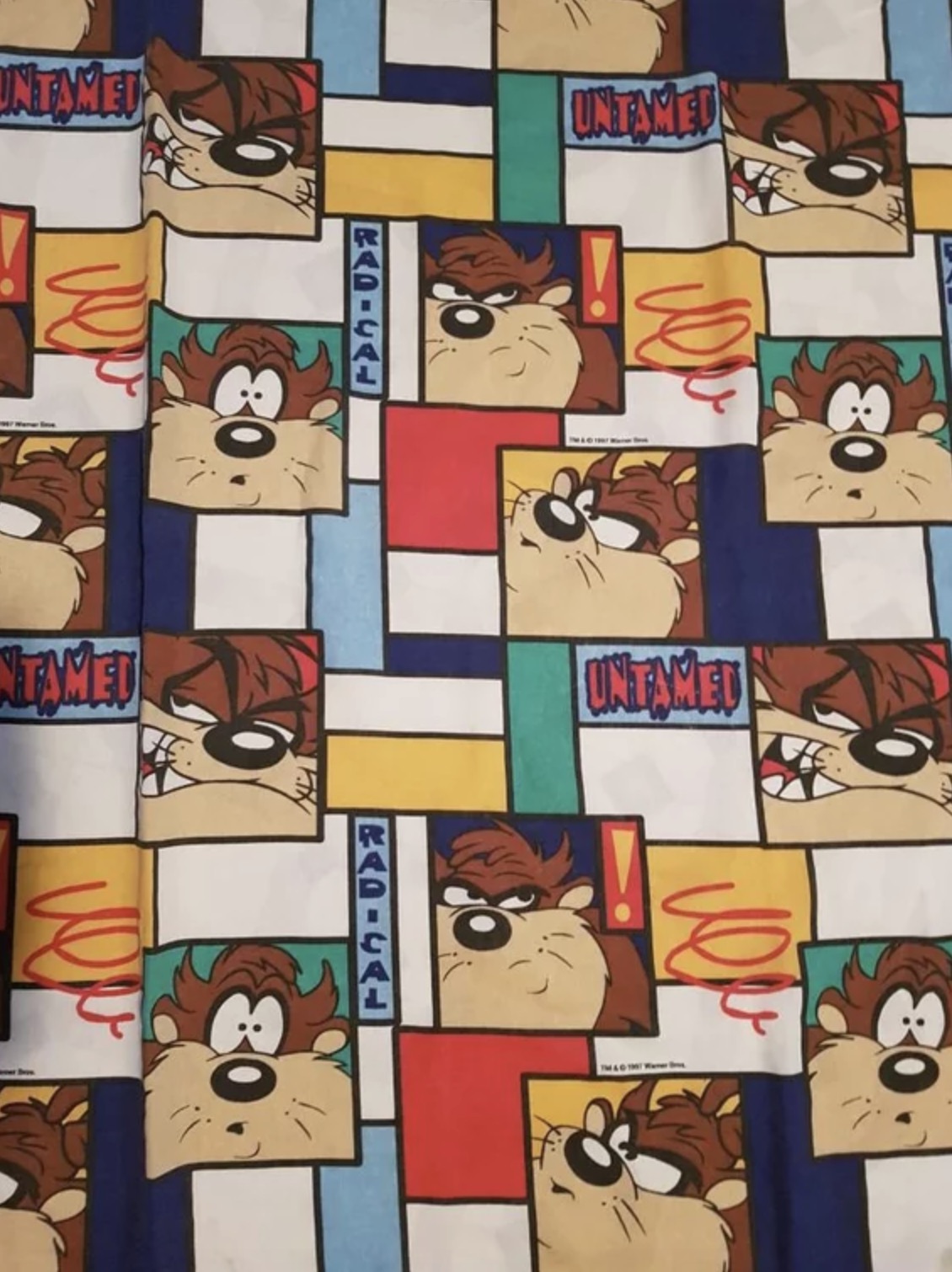 If you were a fan of Taz in the 90’s, you probably thought he was the greatest Loony Tunes character of all time, but he only appeared in five original shorts before Warner Bros. closed their animation studio in 1964. He only really became popular in the 90’s, appealing to kids’ love of mindless destruction. 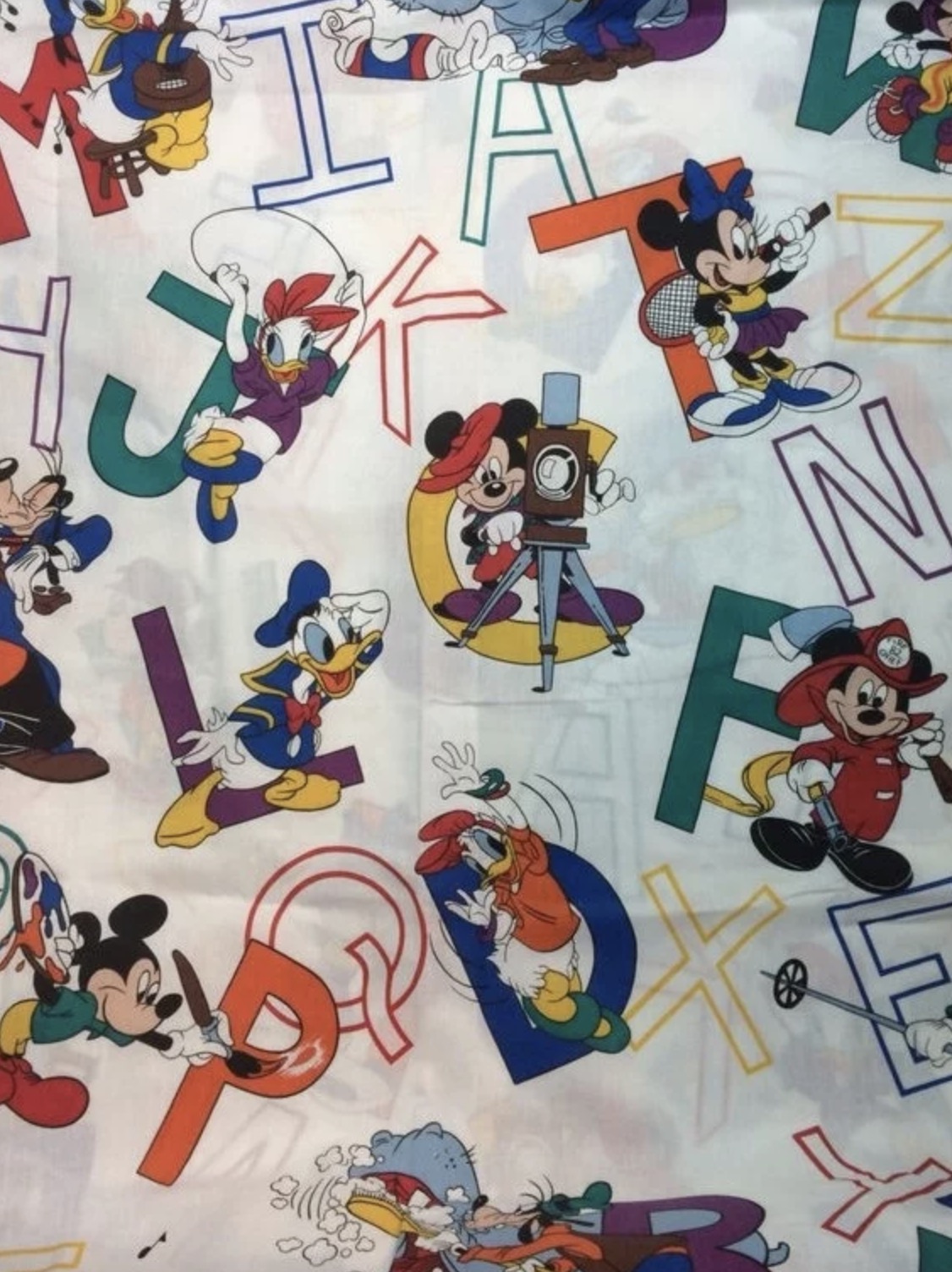 But it wasn’t just Looney Tunes characters that got their own bedsheets. Lots of other animated characters did, too. This one features Mickey, Minnie, Goofy, Donald, and Daisy trying out different jobs. Why does Mickey get all the cool jobs while Goofy is stuck being a hippo dentist? Because Goofy never finished high school. Got that, kids? 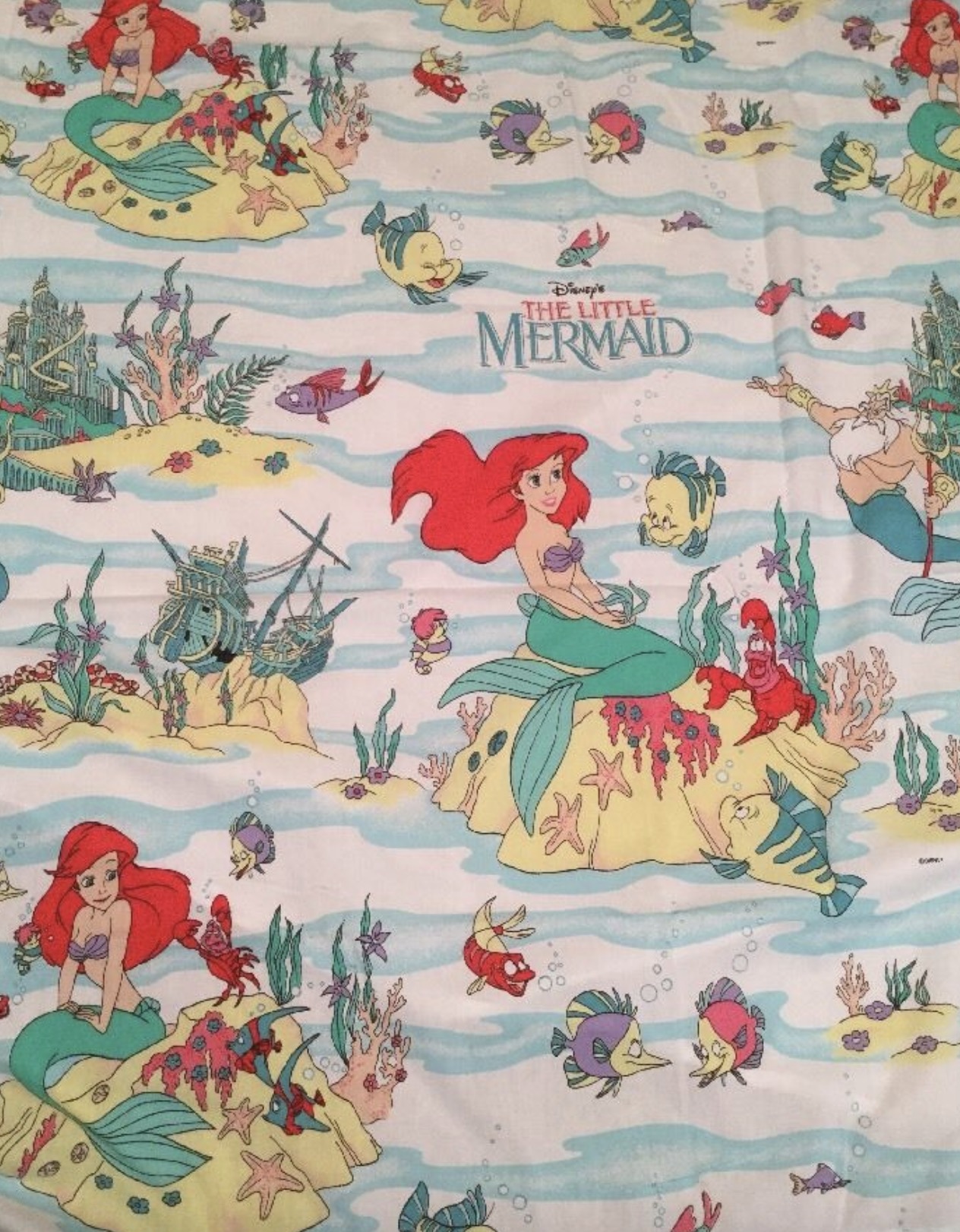 Classic! My sister had this set! I mean it. This exact set. It’s up on eBay right now. Her dog grooming business didn’t take off and now she’s having money trouble. Help her out. She needs this.

No, these aren’t Aladdin bedsheets; they’re just bedsheets for an Aladdin character. Jasmine gets her very own bedsheets because she was and is one of the most popular Disney characters of all time. She’s so popular she’s the only member of the Disney Princesses franchise who wasn’t the star of her own film.

7. New Kids on the Block 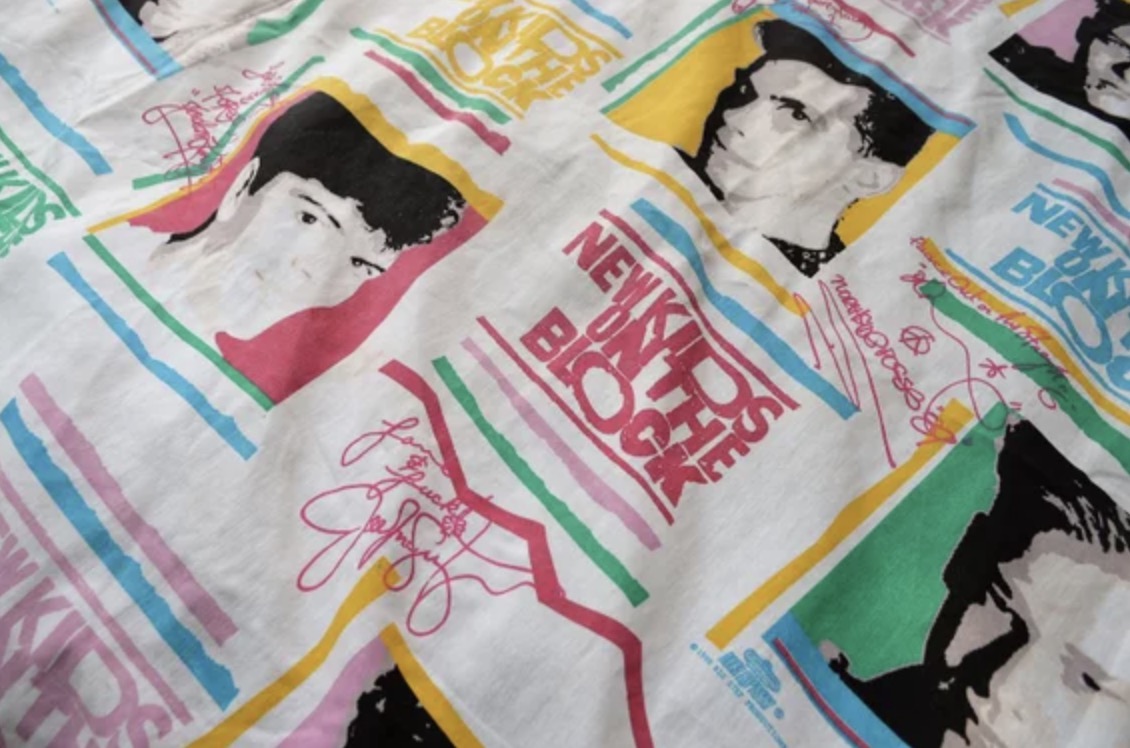 The Kids were one of the most popular boy bands of the 90’s, and they sold a TON of merchandise. In 1991 alone, NKITB raked in $400 million in merch alone, making these the most popular bed sheets Mark Wahlberg has appeared on, just ahead of his Boogie Nights bed sheets. 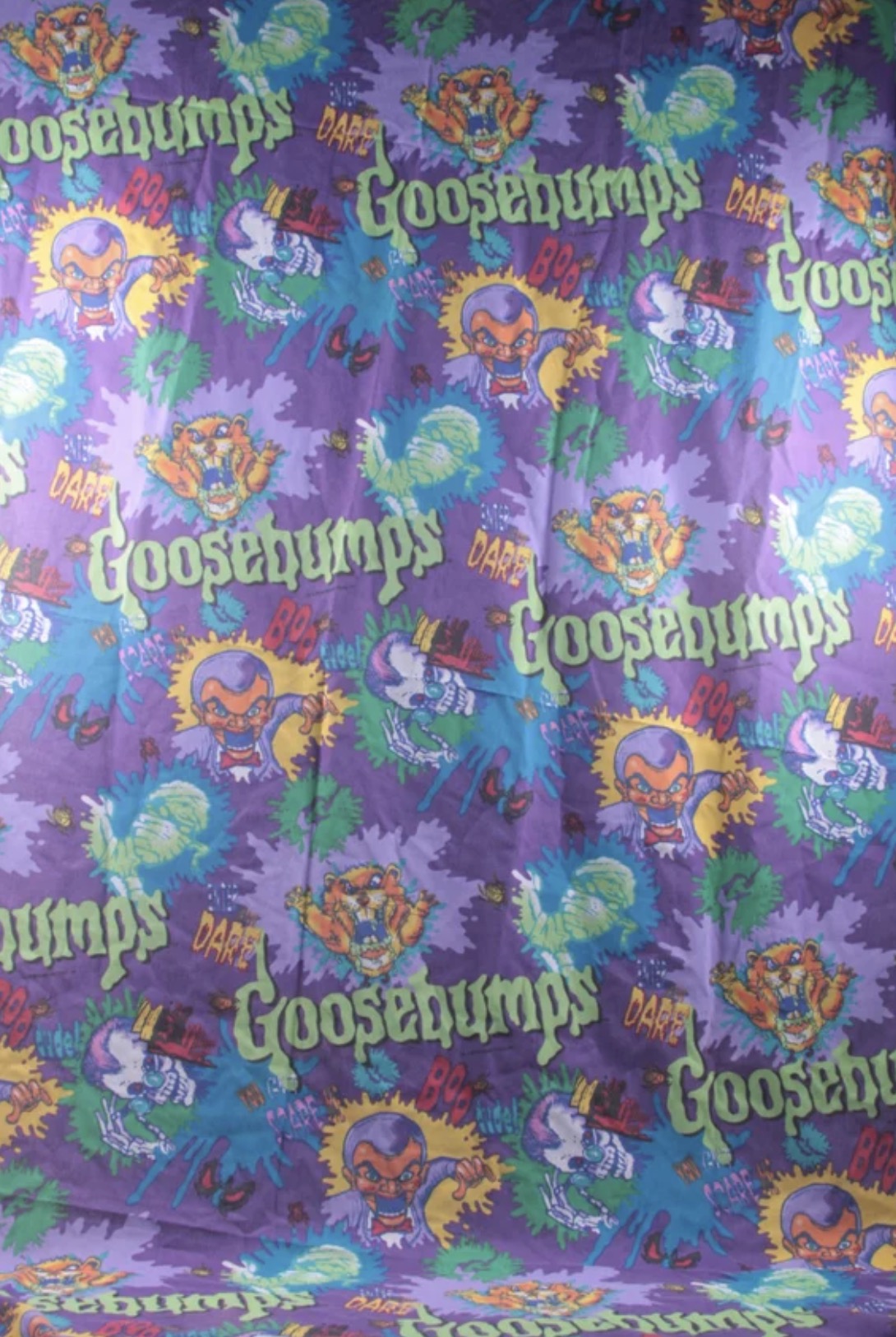 It takes a gutsy kid to sleep under bed sheets from the greatest children’s horror series of all time. These sheets depicted series mascot Curly the Skeleton, Cuddles the Mutant Hamster, the Mummy, and the evil Slappy the Dummy, who came to life after you said a magic phrase. Hopefully you don’t talk in your sleep. 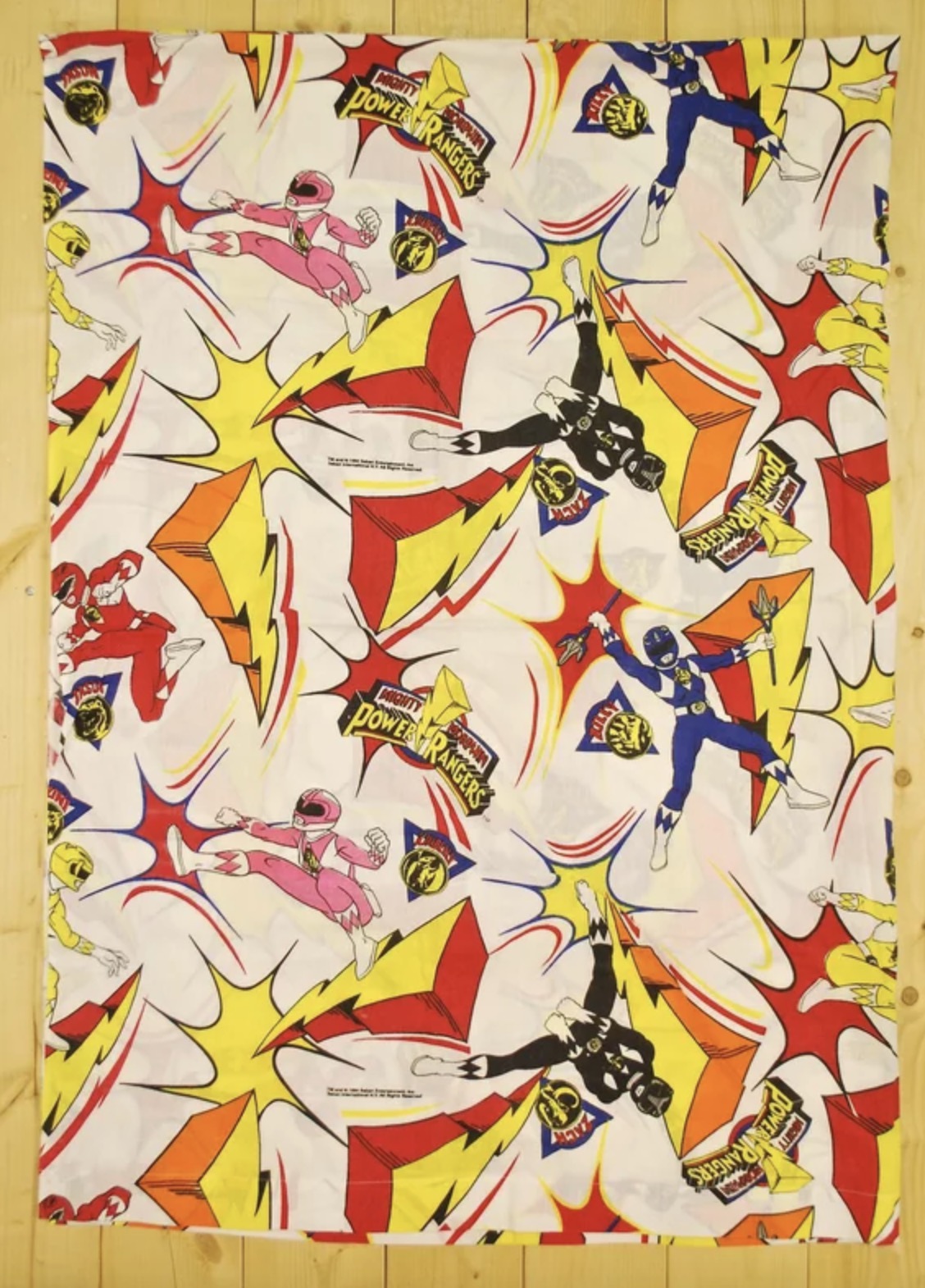 Power Rangers is one of those things where the more you learn about it, the worse you feel. Apparently filming the show was a nightmare. The actors were non-union and forced to work long hours for no pay, and some of them quit over it. The real enemy isn’t Rita Repulsa, it’s unfair employment practices. Ka-pow! 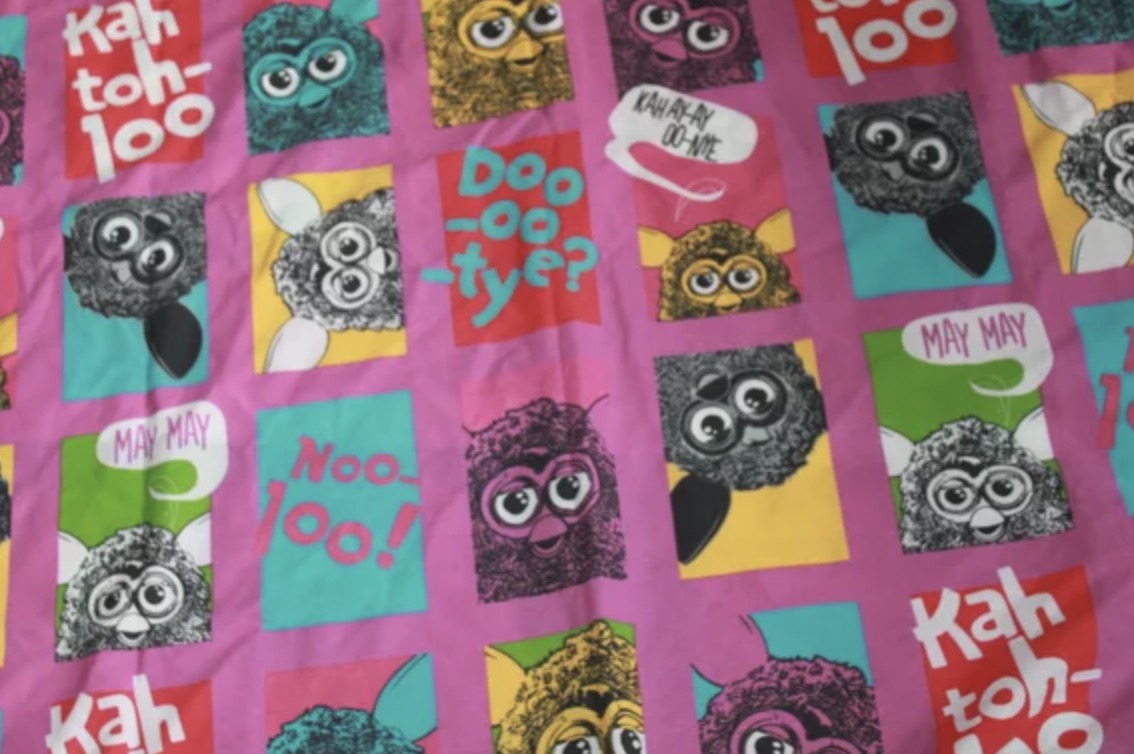 Furbies were THE must-have toy of both 1998 and 1999, selling over 40 million units in its first three years of production. They were also banned from the NSA in 1999 due to security concerns–the spy agency worried that Furbies could be used to record sensitive information. Which seemed insane, until 2000 when a Furby was caught and executed for espionage. 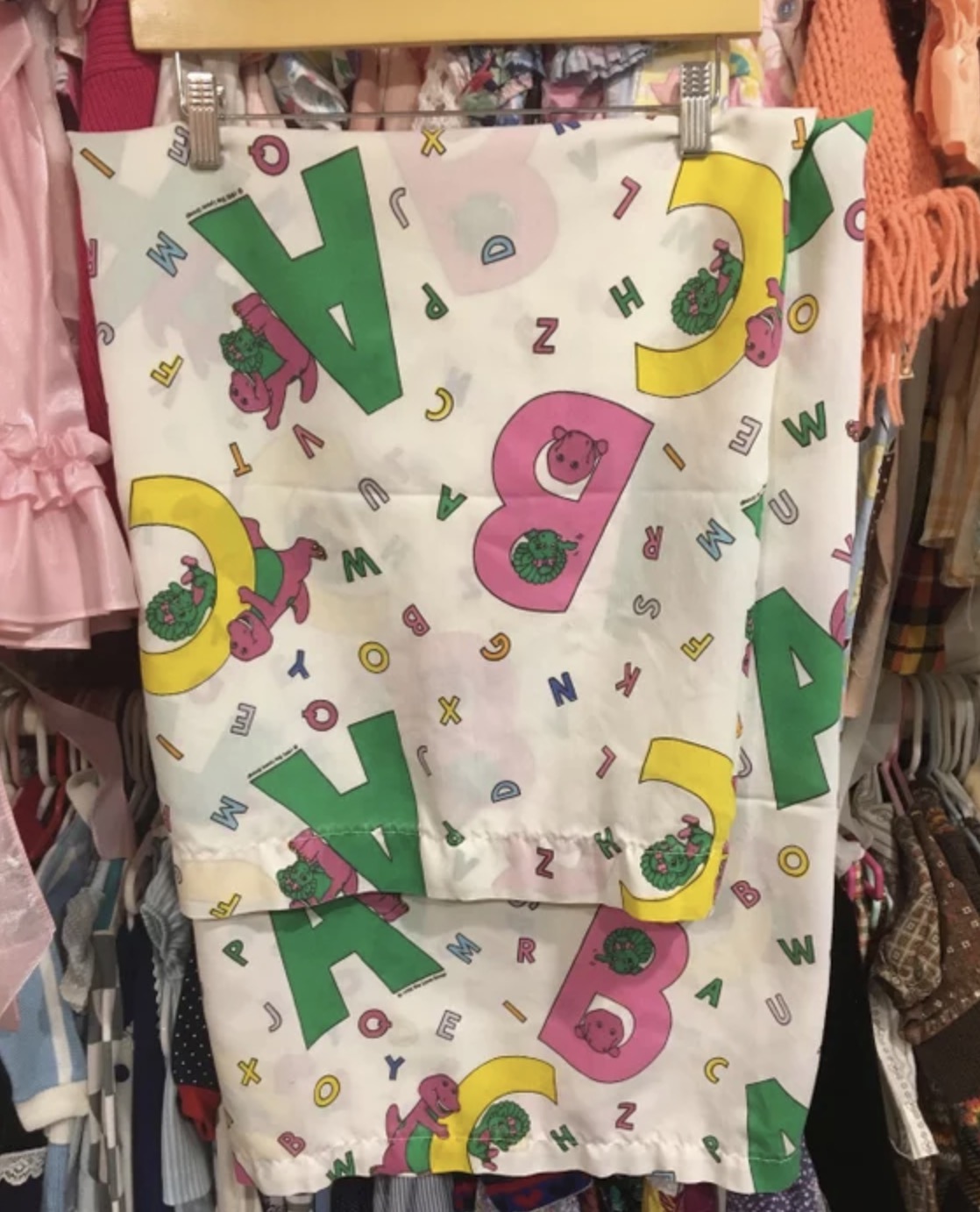 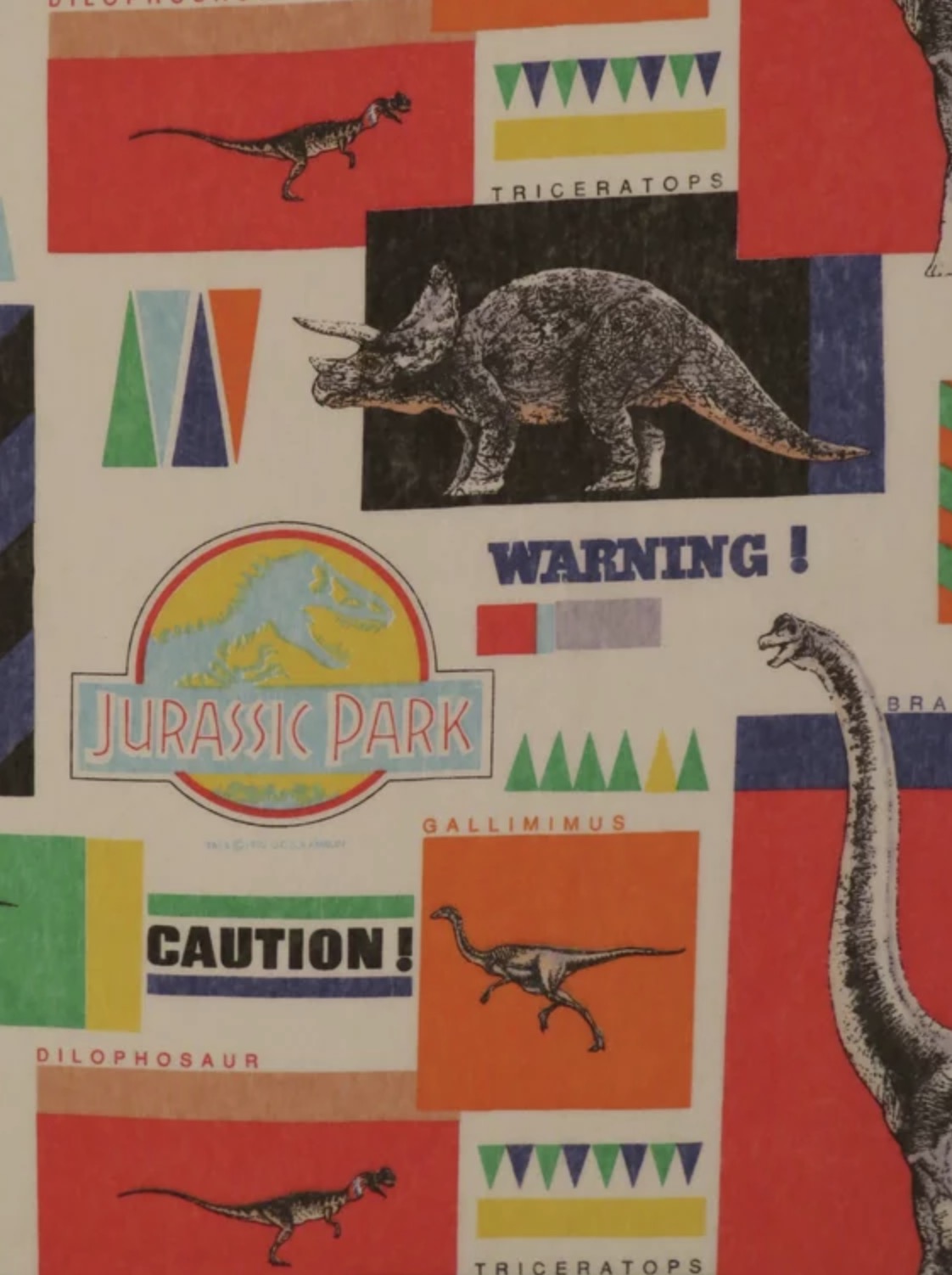 Now that’s what I call dinosaurs. Compared with Jurassic Park, Barney doesn’t even deserve to be called a dinosaur. If Barney had been plunked down in the middle of Jurassic Park, he would’ve been eaten in about 30 seconds. 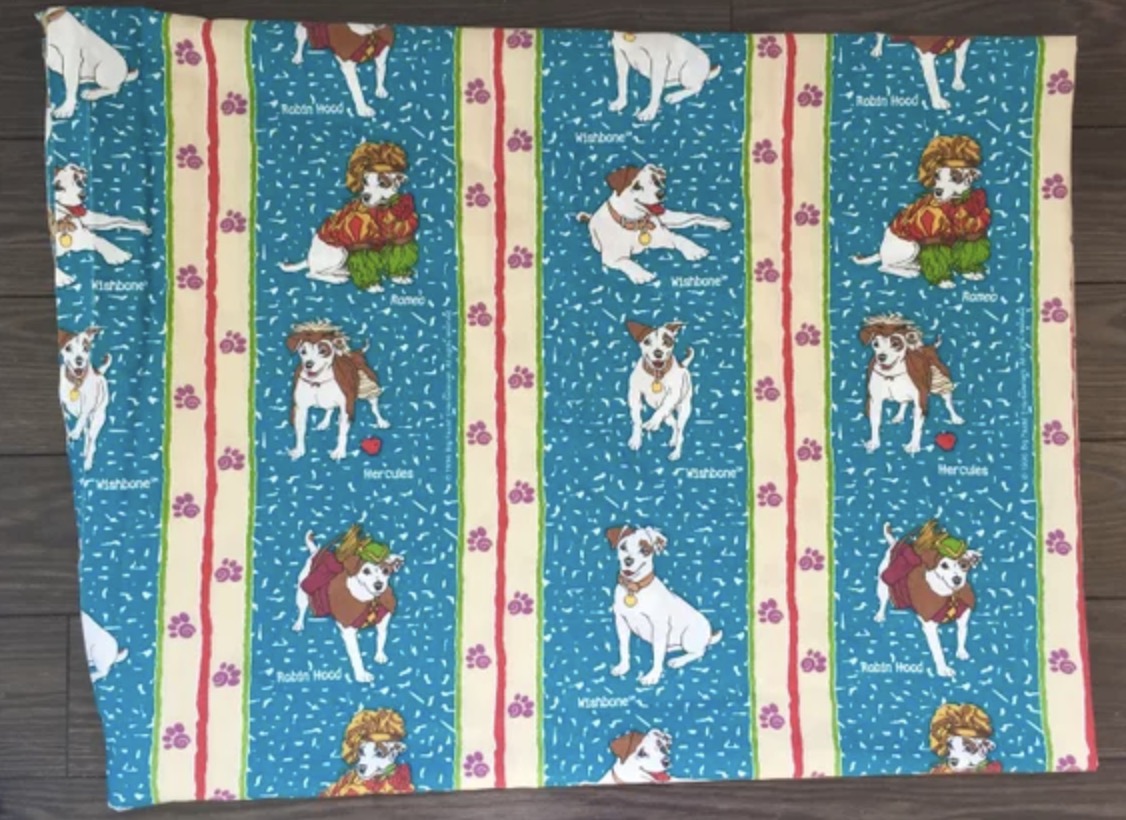 Wishbone was a TV show about a Jack Russel terrier who imagined himself as the main character stories from classic literature. It was a children’s edutainment juggernaut and one of PBS’s most well-received shows. Except for the episode where Wishbone experiences D.H. Lawrence’s Lady Chatterly’s Lover, which was taken out of reruns and burned. 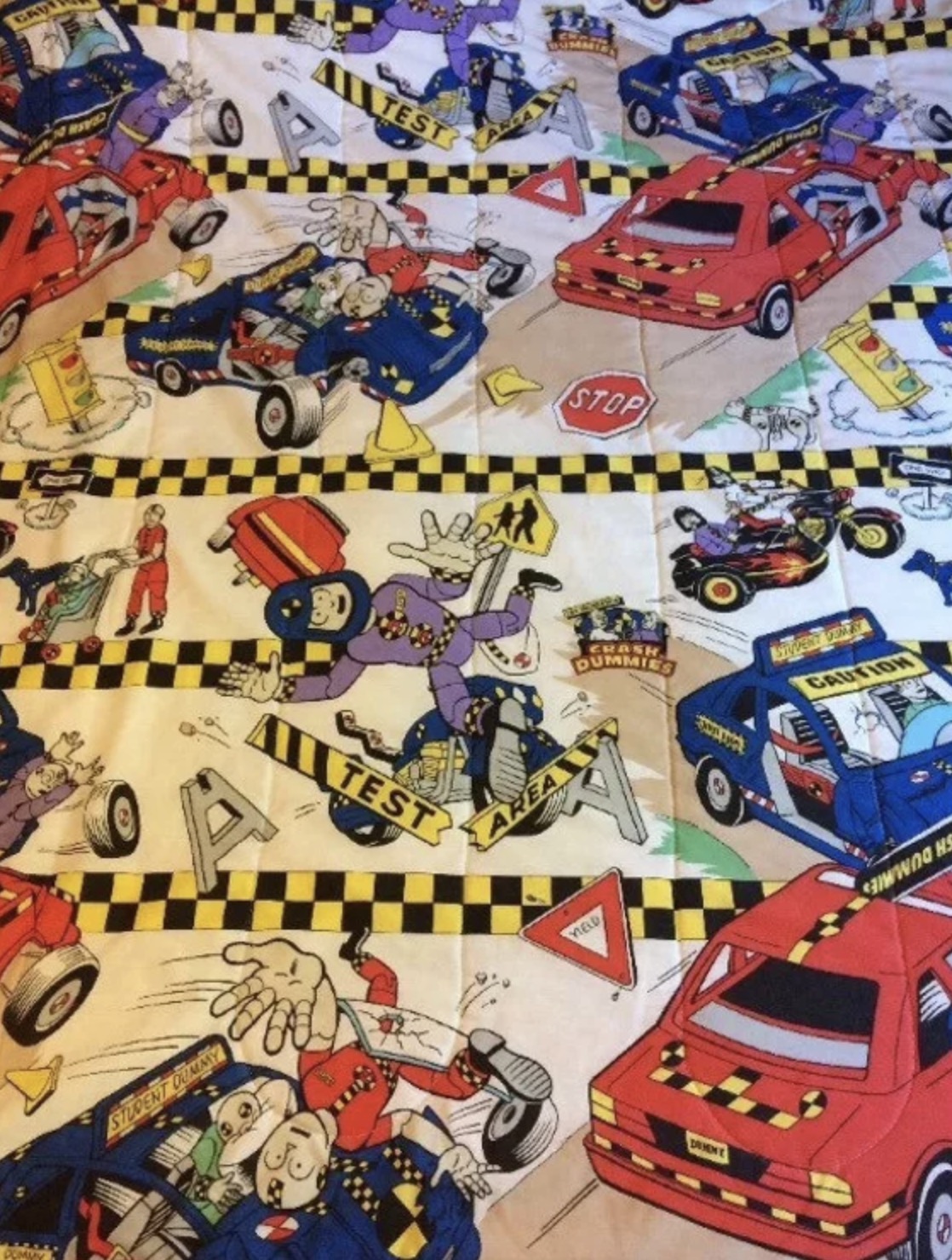 These characters are one of the more unlikely entries on this list. Their first appearances were in a series of PSAs from the 80’s that urged people to wear seat belts. But the characters were so likable they got their own toys, video games, comics, and even a TV special. Their message was safe driving–and what better way to teach that to children than by giving them toy cars to smash together? 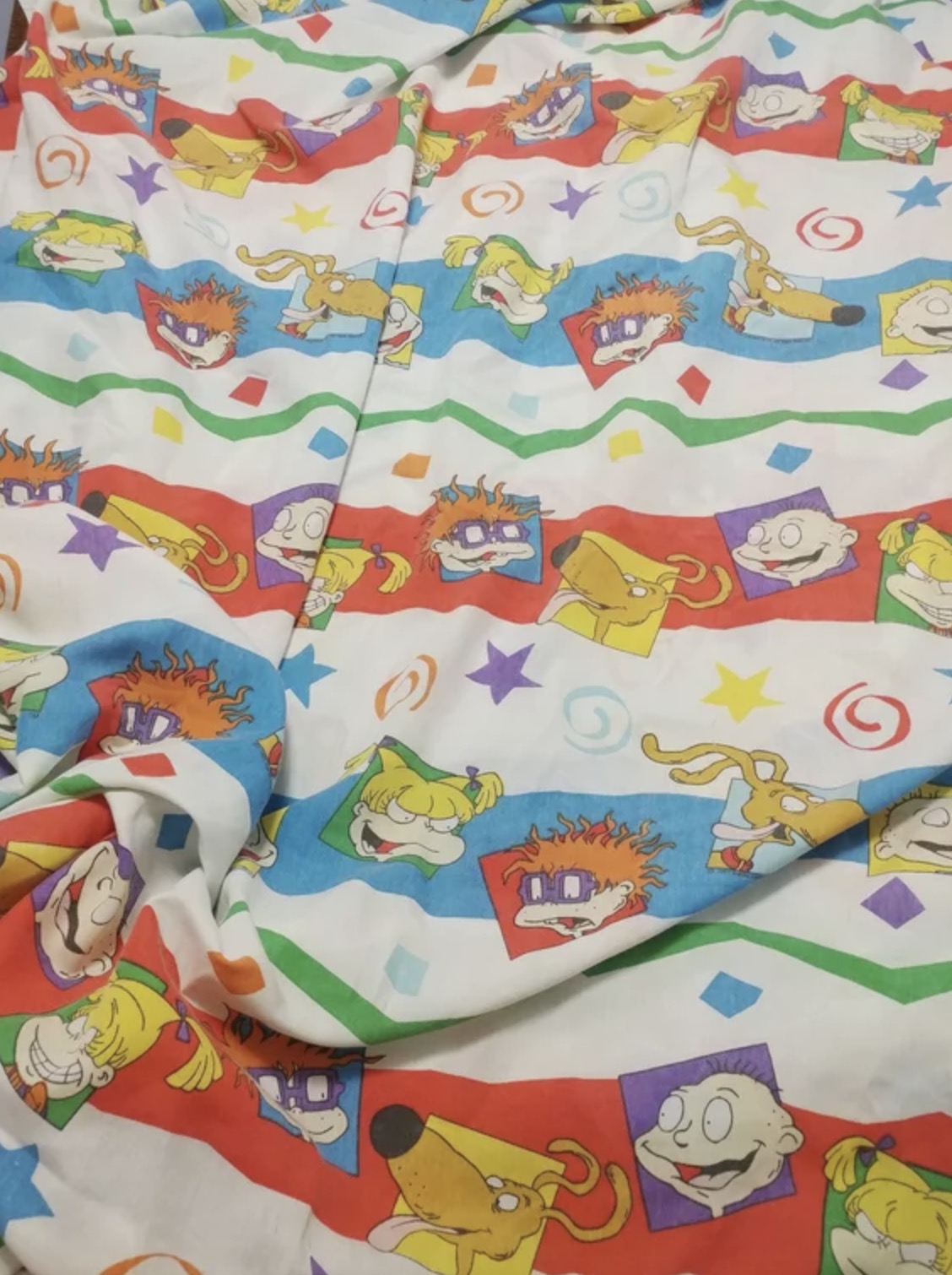 Man, this was the quintessential 90’s show, one of the best Nickelodeon’s ever put out. And it’s getting a reboot! You’ll want to snap these sheets up before they become a collector’s item.

Come to think of it, everything on this list will probably be rebooted if it hasn’t already, so go ahead and buy ’em all.