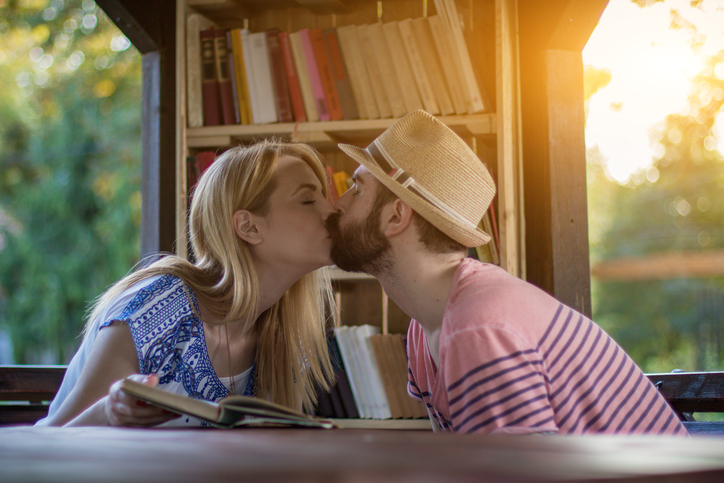 Ahhhhh, the first kiss. A rite of passage for young people. And old people too I guess, depending on when you started getting busy. Regardless of the age, everyone remembers their first kiss. Maybe it was great. Maybe it was terrible.

Take a look at the 13 AskReddit entries below to see if your experience measures up.

I was 14 and she grabbed me and she whacked her teeth against mine. She was pretty embarrassed because it was her first kiss also so we just laughed it off and tried again. I ended up dating that girl for almost 2 years and then she cheated on me.

Homecoming freshman year. Wore too much makeup and a horrible velvet dress. The hottest guy on the swim team had been flirting with me for weeks. Went outside to his car to say goodbye. He kissed me and I all but melted. Like a bad paperback romance the world went silent all I could feel were his warm lips and the cool alaskan air. When he pulled back he said ” you really need to learn how to do that.” It was horrible…

Summer sleep-away camp. I was maybe 10 or 11. The boys came over for a dance. One of them danced with me and held my hand all night. I tried to get him to sit with me and “look at the stars.” As soon as he looked up I grabbed him and gave him a peck on the lips. He literally RAN away.

What a f**king tease.

Truth or dare in 7th grade. It was her first kiss too, and we just sort of sloppily drooled all over each other while 6 other kids awkwardly cheered for us. Then the weird kid Nick, ate a caterpillar.

…My family and her family have been close for a long time and we’d known each other forever. Our families were on vacation together in Key West, Florida and we were alone one night on a pier. We had both hinted at liking each other for a while and it just happened. I passed out about five seconds after the kiss (the kiss lasted about thirty seconds). I woke up on a park bench with her sitting over me asking if I was okay. She and I are still close (in a more than friendship way) to this day, but sadly due to distance it’s never gone anywhere.

It was horrible. I thought you HAD to French kiss and I thought that meant doing all sorts of flipping and twirling motions with my tongue. I was 13 at a church dance and I convinced a girl to be my girlfriend. From there it was 45 seconds of the most distrusting and overbearing tongue assault known to mankind. Within 15 hours she broke up with me. I learned that kissing should be a bit more civil.

It went absolutely horrible. It was a first kiss for both of us. Both of us closed our eyes, he opened his mouth and I didn’t. The result was a tongue up my nose. I do not recommend the experience.

We got stuck in the ‘which side do you put your head to’ dance for a good while while our mates awkwardly watched us. I then had to pretend his runny nose didn’t touch my face… We were 13.

We were in the library. He leaned in and went for it and I literally ducked and pretended I was looking at a book behind him. He tried again and I ducked yet again. Finally, he succeeded the third time and it wasn’t great. Don’t get me wrong he’s a wonderful guy (still one of my best friends) but that kiss was just so clammy and unfeeling… Kinda felt mis-sold from all those books I’d read!

Oh god he kept his eyes open and had chronic postnasal drip. i can still hear the labored breathing through his nose. it haunts me at night.

Couldn’t have been worse, as I leaned in, her dad who happened to be picking her up, honked his horn. So she half turned to look, which resulted in a “half lip kiss”.

It was 7th grade and I was dating a girl who thought she had a “spirit animal” (wolf). She’d always pretend to whimper (like a hurt wolf) and say her “mouth hurt” (though I assumed she meant because of her braces). So one day after school I eventually kissed her and her lips we like sandpaper. She then promptly bit into a soccer ball to show me how strong her “wolf teeth” were. I broke up with her 3 hours later… I’ll never forget that day, no matter how I try.

It was awesome for a minute. Then I realized how bad her breath was. I wanted to keep going, but part of me wanted to pull back and vomit. I still remember the taste. If I could change it, I would have given her half of the gum piece I had just put in.