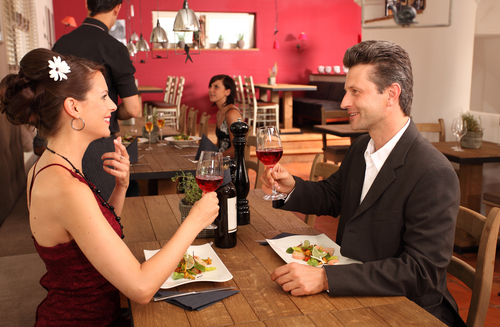 It’s always awkward to witness a really awful date as it happens. I’m sure we’ve all had that moments either eating at or working at a restaurant when we saw a couple fighting/screaming/crying in public.

These 12 AskReddit users who work at restaurants dish on the worst dates they’ve ever had the displeasure to see.

Was a waiter, not anymore but the worst date I ever watched (or arguably the saddest) was a guy in his 20’s came to my restaurant and said he had a booking for two. I took him to his table and make small talk. Then after 15 minutes and his date still hadn’t turned up I brought him some complimentary food. Then after 15 more minutes I remember looking over and seeing his head buried in his hands. I was occupied at the time but I remember going over some minutes after that since he signalled me over. He asked to be moved to another table (right next to a plug socket), he plugged his phone in and waited for his date to arrive.

After 30 more minutes (so he was roughly at the restaurant an hour) he told me he wanted to order food. I took his order and then continued with my duties. I remember giving the guy his food and he just sat there with a flat look on his face, as if he had the 1000 yard stare. At this point there was only him and another couple at the restaurant. I watched him pick apart his food, leave it mostly untouched. So I went over to talk to him. He never said much and I could tell he didn’t want to either. He stayed for another hour just glued to his phone before asking for a check and getting up to leave.

I felt just so bad for the guy, I couldn’t imagine what it must be like. I can only assume he was stood up.

Former waiter, a guy broke up with his girlfriend… before I brought them their drinks. Everything was fine when I took the drink order, came back and she was crying. Asked if I should come back later and the guy said no it’s fine, and ordered a steak. The girl didn’t order anything. They stayed for another 45 minutes not talking while he ate his dinner and she sat there sobbing. It was hands down the most awkward table I’ve ever waited and what a jerk that guy was too.

Was a waiter for 7 years. Have some good ones. But nothing tops the time this couple came in. The girl was a regular, so we knew each other. The guy was some random guy she met online for a date or something. Anyways the meal is fine they order a boat load of sushi, sake. The tab comes and it’s like 180 bucks I think, which is fine for her. SHE puts cash in the book, and starts to get her coat. I had already seen that she had left me around a 30% tip. He hangs back to “go to the restroom”. After she leaves he comes out of the restroom, opens the book, takes the money out and leaves. I walk out right behind him, and tell him I saw him. He starts hassling me and pushing me. She gets out of the car and says, ” WHAT IS GOING ON”. I tell her. She literally FLIPS OUT and starts beating him with her purse and hands and all that. Gives me my money plus like 50%. Leaves the doucher in the parking lot. Good times.

Sat two at the table, clearly on a date. Give them some time before I check back —

Me: Have you guys decided on food?
Her: I dunno, everything looks gross!
Me: …
Him: Just give us a couple more minutes, a few minutes pass, I return. He orders a burger or a sandwich, she orders a chicken Caesar. Some time passes and I decide to stop back and let them know their food should be up soon when I notice that the girl is not at the table. The guy stops me – “Can I get that to go?”

I tell him I can box up the whole order.

“No,” he replies, “I’m going to eat mine, just do hers to go”
So I watch him eat his meal alone in silence, pay quickly, and leave with her salad in a box.

There was that young couple (~20 years old) at our bar. everything seemed to go well when I noticed that after the second glass of red wine the girl acted a little weird. when I went back to their table I saw that her eyes were half closed and her head repeatedly sunk onto her chest. I asked her if everything was alright and the guy said she was just tired. I immediately thought he might have drugged her or something and asked my coworker in the kitchen if I should call the police. she came out of the kitchen to check on that girl and it turned out, that they had gone to school together and the two actually were brother and sister. apparently the girl was just really tired.

6. This probably got ugly

I work at the quick service side of a restaurant. A woman came in with her teenage daughter and ordered a beer. Her daughter was upset, asking her to please not drink. At first I thought she didn’t want to have to be the one to drive home. But the mom was determined to drink that beer because she explained, “My soon-to-be ex-husband is standing right outside. And he doesn’t know it yet.” I felt so bad for the daughter but it was just an awkward situation.

My girlfriend has a café, and she told me that some days ago a gay guy walked into her place with a teddy bear in a present box. He asked her to hide the box until his date arrived and give it to him together with their order later, so it would be a surprise.

She missed the middle part of the story, but some minutes later the guy went to her with tears in his eyes, asking her to give him back the box and also for a hug.

When I was serving, I worked at a Mexican restaurant. After they got their meal, I heard a blood curdling scream. I turned around, and the dude bolted, just after he threw one of those hot skillet fajita platters on his girl.

I never did find out why — but those things — are damn hot when they first come out.

My favorite story is about this really great guy whom I’d seen bumbling through dates more than once. He seemed nice and I’d spoke with him briefly either after a date or even when he asked for his check.

He wasn’t bad looking and he never said or did anything that made me think he was a goon or a creep. But he always had dates with a woman and then a few weeks later it was a different women. I asked him once how he got so many dates and he spilled his secret.

Being set up by friends and family. He was in his 30s and had never had a girlfriend. He sheepishly admitted that he just wasn’t interested in that when he was growing up once he was interested, he was so awkward that it never clicked.

He always paid for his and his dates meals. He jokingly told me the only thing he has to offer women is money. I think, even though he played it off as a joke, really believed it.

So when his card was declined, I figured it would embarrass him. It would probably hurt what little “ego” he had. What’s more, I thought the date was going pretty well for him. So I slid my card and payed for their meal out of my own pocket. I figured I was paying 87$ for this guy to have a good date that wouldn’t lead to a second, but at least he wouldn’t get emotionally distraught over being unable to pay.

I brought him back his card and told them to have a great evening, blah blah blah. He came back in a few days later and asked for me directly. The jig was up and I figured he realized he wasn’t charged and was coming back to pay.

He was able to put two and two together when he checked his bank account. Not enough money for dinner on his card, no charge from our restaurant, yet he was not spoken with about the payment. I told him I just appreciated him coming in all the time, tipping me well, and figured I’d have his back on this one. He put a hundred dollar bill in my hand and wouldn’t take it back no matter what I did or said.

Dude came in every week with a different snow bunny. First two times waiting on him: zero tip for excellent service. Third time he got greeted with, “Heyyy, it’s so good to see you guys again. Now, iirc, [toward the man] you’ll be having a tall High Life annnnd [toward the woman] a (random mixed drink), right?” They didn’t make it past the appetizer before requesting the check, which I took my sweet time delivering. Lady stared daggers at him. Guy stayed staring at the wall. Never saw him again, couldn’t care less.

When I was a server, there were a couple of times where the date went SUPER bad (for various reasons) and the dude would leave his number on the check. Like, I just watched you berate your date for getting a Coke instead of water, and you think I want that too?

I was hostessing, and a reservation popped up for a blind date. They each had a drink at the bar before sitting down, and I took he lady’s coat down to our coat room.

They seemed to be getting on alright at the table, but then when the man gets up to go to the bathroom, the lady rushes over and asks for her coat.

She says hurriedly that the man was saying inappropriate and uncomfortable things and she wanted to leave without him knowing.

She hid around the corner in the vestibule while I brought her her coat, and she left.