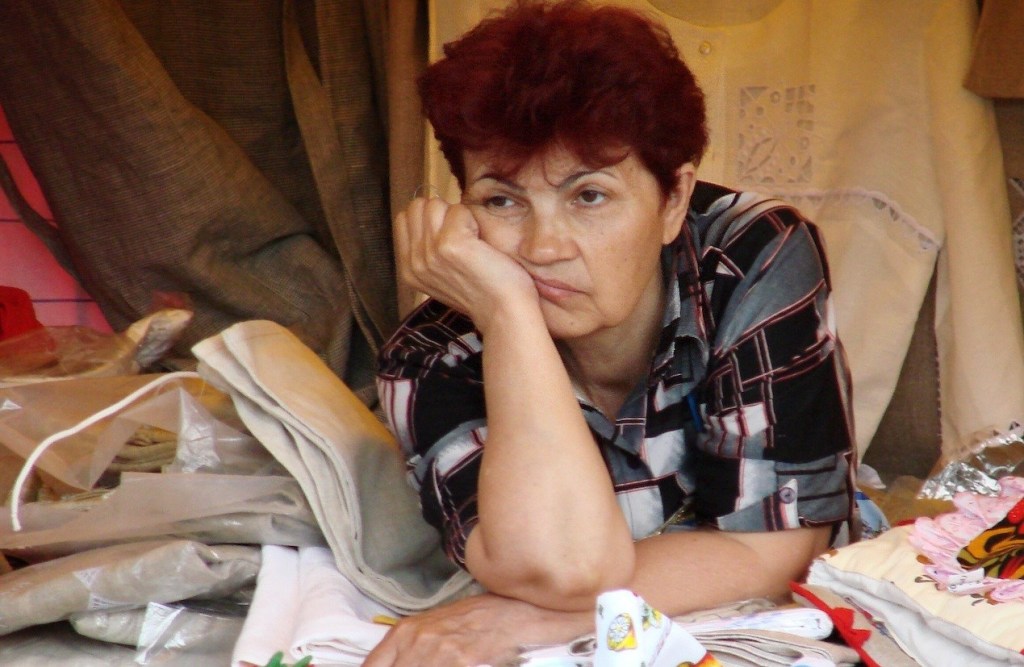 12 People Talk About the Worst Jobs They Ever Had

I’ve worked some terrible jobs in my life, but these 12 people have had experiences that make mine look like a walk in the park. Bloody hotel room cleanup anyone? Yeah, doesn’t sound like a whole lot of fun…

Hotel housekeeping. If it comes out of the human body, I’ve cleaned it up. I started in a by-the-hour motel when I was 14, owned by a woman who didn’t bother with hazardous waste procedure and cleaned up what looked like a murder scene with nothing but bleach and kitchen gloves. I walked into that room, and was absolutely positive that when I pulled the shower curtain open there was going to be a body in the bathtub. Thankfully there wasn’t, just blood everywhere. Owner refused to let me report it, made me clean it, and I didn’t want to get in trouble for bleaching a murder scene at 14 so I never did call the cops.

I was a waiter at a kids restaurant, which had a bear as its mascot. The new guy had to “be the bear” on their first day, which meant putting on a massive bear costume over our waiter’s uniform, including a huge fur head that you could barely see out of. You were then led around the place to wave at the parents and play with the kids, once per hour. If you spoke you were fired, as some of these kids were return customers who would recognise a waiter’s voice.

Wanting to impress my boss, I really hammed it up. I danced, I gestured, I goofed around, I sat on a mother’s lap, I ruffled a father’s hair while he growled “get off me or I’ll stab you”. The boss loved it so much that he made me be the bear every day I worked there.

Which would be great, except it was August, and so hot that the restaurant’s air conditioning broke. The bear suit hadn’t been washed in the history of the restaurant, so served as a memorial to the sweat of a hundred fallen waiters. Little kids would run headfirst at the bear and headbutt my testicles with depressing regularity. And all it earned me was the disgust of my wait team, who thought I was “goofing off work” by being the bear, since it was clearly easier than carrying two plates of reheated lasagne across the room and refilling drinks.

I worked at a slaughterhouse for a little while. They killed steers there but got pork shipped in. The hams came in a gigantic cardboard vat, probably 5′ wide and 4′ deep.

They were heavily waxed on the inside to make them waterproof and had steel banding running around the outside kind of like an old keg or barrel. Once we fished out most of the hams and trimmed them there was always a couple feet of blood at the bottom. As the new guy it was my job to dangle over the edge with a meat hook in one hand fishing for the remaining hams and scraps. Usually it was about an hour in shoulder deep blood with your face next to the surface.

Lifeguard. It was hours upon hours of boredom intermingled with seconds of sheer terror.

Worked in a granite quarry. It was hell on earth.

You know in the old black and white movies where the prisoners were punished by making big rocks into smaller rocks with a 12lb sledgehammer, that’s sort of what I did for a living. Some parts of it were bearable, especially when I got to blow stuff up with primer cord. Touching your wires to the crane battery’s positive and negative post and feeling the ground leap underfoot as you separate 40+ tons of granite from the earth is awesome. I just had to be careful and stay under the crane as debris from the explosion rains down. That was it however.

It was generally 120° in the hole during summer and seemed to always be below freezing in the winter. Swinging a sledgehammer hundreds of times in these conditions is brutal. The only people that the hard physical labor didn’t phase were two of my coworkers. These dudes were superhuman. The heat didn’t bother them, they would be wearing long sleeves in June when the temperature dipped into the 80’s, they were chilly. I had to make them give me the hammer when it was my turn to pound in the wedges and the foot-spikes, otherwise they would keep the sledgehammer and start down the line again.

Any normal man would be physically exhausted from swinging the sledgehammer dozens of times. Not my coworkers, they were beasts. That goes for the jackhammer too. I laugh when I see one person running one on TV. It takes two people to run them monsters, at least ours did. Enter the supermen. I would turn my back for one minute then feel the vibrations in the ground that you can feel when the jackhammer is, well, jacking. Turn around and there would be one of them running it by himself, defying the law of physics. That was over 25 years ago. Much respect for these men. For me, however, I was in hell.

Turns out what they actually meant was “sitting in a room for 8 hours cold-calling CEOs from an outdated call list and trying to trick them into a sales presentation.”

Might I add, about a month into the job they hired a new intern manager. Drove to work every day from the Cape on his Harley (2+ hours one way), lauded his degree, chain smoked, and DJ’ed on the side at north shore nightclubs. He insisted on sitting in the room with us, for 8 hours to check if we were actually making calls, all while berating us for being poor employees and cheap labor.

On my last day of the internship, he called me into his office and told me “the only reason you are still here is because we didn’t have to pay you. You’ll never be successful like me. You’re not cut out for the business world, if I were you, I would drop out and try to find a trade you’ll succeed in.”

Even as a 19-year old, I knew an idiot when I saw one. I looked him square in the eye and said “you can do the work yourself” and walked out with the other interns. He then wrote a letter of complaint to my school to try and have my internship credit revoked, but luckily my advisor knew the situation and cut him out.

Dan the DJ, if you’re reading this, I want you to know I took your advice and did my best to never become you.

Dealer in a casino:

You learn a lot about different games and get to “play cards” all shift. You also make some pretty good coin with tips and what not.

You get to meet some of the worst people on the planet. When people start losing money at your table…several hundred to several thousand at a time…suddenly that fun atmosphere becomes soul-suckingly tense…to the point of “You better hope you’re not walking alone when you’re off tonight”. But…you get to call your pit boss over and say “This patron just threatened me” – boom, booted out of the casino, banned for 6 months to a year and possibility of criminal charges. Sometimes…I got a nice justice boner working there.

I wouldn’t recommend working at a casino as a dealer, its definitely not for everyone. However, if you’re a student and want to make some good money…its a good job…but it comes with a price. I’m sure some other dealers will agree.

If you ever wanted to work wonders for your confidence and have the ability to become a stone when it comes to people being absolute jerks to you – I suggest it. I think back to what skills I’ve gained from my time dealing – I’ve learned to be grateful and when I have a bad day I remind myself that I’m not dealing anymore.

Cutting fancy glass for use in mosaics.

A glass cutter is basically a pen, with a small metal wheel on one end, and a metal ball on the other.

Fancy glass is thick, heavy expensive and sharp. The weight, thickness and texture changes drastically. One may be a 3 centimeter smooth green glass sheet, the next may be a textured 5 centimeter piece of orange.

There is NO training.

Glass dust is a thing.

My finger tips were swollen with tiny, shards of glass and I broke much more glass than I was worth.

It was a short gig.

I actually didn’t take the job, but it would have been the worst by far. I applied for a position in an industrial bakery as a “Sanitation Technician.” As advertised, the job would entail disassembling, cleaning, and reassembling equipment, but when I showed up for my “interview” (really an informal orientation) the nice lady told me I would actually be standing at one end of a conveyor belt and given one simple task: To pick up trays of bread coming off the conveyor belt, rotate them 90 degrees, and place them on a different conveyor belt, for the entire duration of my 12-hour overnight shift.

It would’ve nearly doubled my pay, but I just could not do it. I put my little hat back on and went back to rolling burritos. Even in the darkest, most horrible open-to-close days of my time at the burrito restaurant, I would console myself with the thought of that job and how much worse things could be.

Being poor means being willing to do messed up things for tiny bits of money, so I’ve had more sucky jobs than I can count. But the one that stands out to me most is door-to-door political fundraising/canvassing.

This was back in the early ’90s. The way it worked was you had a clipboard, a pen, a petition, and some envelopes. The whole crew would meet at the office and then pile into the 15-passenger van(s). The supervisors would drive us out to a territory (“turf”) anywhere from 10 min – 2 hours away from the office. Then, they would divide us into pairs and give each pair of canvassers a map marked with the pair’s assigned turf.

If I recall, we started knocking on doors around 3:00 or 4:00 p.m. and kept at it until 8:00. In that time, we were supposed to knock on people’s doors and talk to them about whatever issue we were working on at that point (when I did my brief stint it was nursing home reform legislation). Then, we were supposed to get the occupant to sign our petition and make a contribution (preferably check or charge) on the spot. Our nightly quota was $120.

If you think that people hate having telemarketers call their houses at dinnertime to ask them for money, just imagine how much they love it when those same telemarketers show up unannounced on their front doorsteps.

Between bad weather and vicious dogs answering the door, people’s pervasive hatred of trespassers and solicitors, and constant fear of being fired for missing my quota, “field canvassing” was definitely one of the worst jobs I’ve ever had.

I was a Martial Arts instructor in high school (I trained starting as very young so I had my black belt at 13).

I’m a female and the disrespect men in martial arts have for women is nothing compared to the stuff other women give you.

Working with the kids was great but coworkers were crap.

Picking Mangoes in Australia, many people are unaware that if you snap off the stalk on a Mango, poisonous sap flies out which makes you blister quite dramatically. Also the best job because of the beautiful scenery.