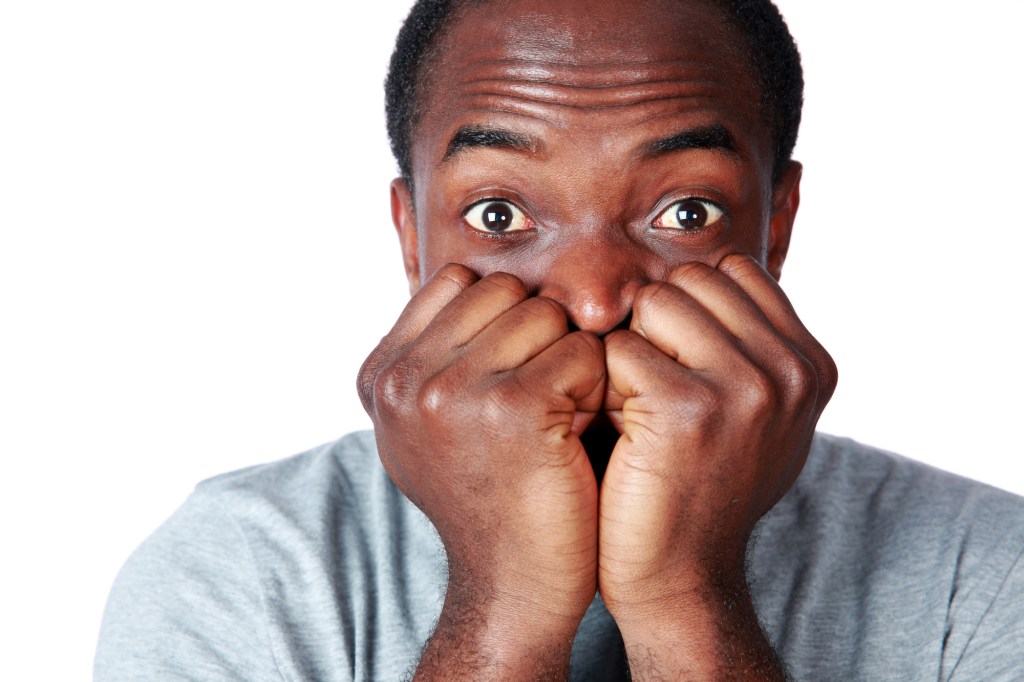 Closeup portrait of a nerveous african man over white background

12 People Share the Most Awkward Moment They’ve Ever Experienced. One with a Clown.

Oh boy, here we go. It’s about to get awkward af up in here!

I mean, you have no idea what I’ve found on reddit. It’s so good, and yet so awkward.

All of those cringes you’re about to do, that’s my fault. Well, and these people for sharing their stories publicly.

Alright kids, buckle up… it’s going to be an awkward ride.

1. Just turn and walk away

I was at my girlfriend’s house (now wife), and was sitting in the garage smoking a cigarette while she went in for beverages. We were both 18 at the time, still in high school. I was sitting in a chair at the entrance of the garage, looking out into the woods when she went into the house through the door behind me.

I didn’t know anybody else was home, as there were no cars in the driveway. Well I hear the door open behind me, so I casually exclaim “Get over here, I’m wanna pull down those pants and spank that fine ass right now!”

I turn my head, and to my horror, I discover it was her father, who was coming out to say hi to me. We both stared at each other, jaws dropped, speechless. After a few seconds, he turned around without saying a word, and walked back inside.

We have never spoken of this since.

Sitting in a history class in college and my history teacher says something weird.

He says that all black men have a moustache. I told him that he can’t make that sort of generalization.

The door then opens and this black guy walks in without a moustache. So I said to the class, Hey, he doesn’t have a moustache.

3. Use your quiet voice

I was spending the weekend with a bunch of friends/friends of friends from high school. I had a George Carlin book and was randomly reading some funny quotes when we were bored.

Then I hear a sniff and look up to see the girl across from me starting to cry… the girl that I now remember has a sister and father that are little people. She got up and went to her room, and a couple friends followed for support.

TL;DR accidentally told a girl her family was going to die young.

4. Heart was in the right place

Gave the Heimlich maneuver to a random girl at a house party because somebody said “She’s choking!”

Turns out she was just laughing really hard at the time.

On a first date with this girl that I was crushing on hard.

During dinner everything was fine until I spilled wine on my pants. No big deal, I laughed it off and continued on.

Went to the movies afterwards (Dark Knight I believe), getting the normal popcorn and soda. Now I’ve already seen this movie twice by the time this date came around, so I didn’t mind going to bathroom during it. We’re seated smack in the middle, maybe 6 rows back.

I slowly make my way through my aisle and get to the stairs on the far right of the theater. As I take my first step while still looking at the screen, I miss the step and slide on my ass down 5 or 6 steps. I bounce up super fast, hoping no one but the people next the stairs saw this fall.

I take a right turn at the bottom and run right in the wall.

At this point a shit ton of people started cracking up. In my embarrassment of falling I forgot that the only exit was on the far left.

I do my business and come back, people were still chuckling at me by the time I sat down. The girl made some jokes about it but I still felt awkward af.

I once walked in on a clown in his underwear in a public bathroom.

A literal clown. With makeup. And tight white underwear.

It was as weird as you’re imagining it, but creepier.

It’s all a blur, as I didn’t really feel in control of the situation when it was happening; I just observed it all.

It was initially jarring, when I opened the door to see a clown in his underwear standing at the mirror. I immediately said sorry and began to leave. And then he said, “No. Come In.” And I don’t know why, but I did.

I had gone to the bathroom originally to #2, but there was no way I was doing that in this environment. But for some reason, I walked over to the urinal, and pretended to pee, while he stood at the mirror doing his makeup.

I think I did this to just get in and out as quickly as possible, and then go find another bathroom to actually use. Somehow I thought that if I didn’t pretend to pee, then the situation might seem weird. (?) So I pretend to pee, zip up for no reason and make a b-line for the door.

It is at that moment that I pass behind him, that he grabs me by my arm and says, “No. Wash Your Hands.”

Again I am frozen with fright and all my ability to make decisions is long since gone. I wash my hands, watching in the mirror as he watches me wash my hands.

He is still in his underwear.

I was in a film editing class and the professor was having a miserable time with the equipment, so finally, in exasperation he asked the class to start telling jokes to kill time while he fiddled with things. No one volunteered at first, then I tentatively said I had a joke but I probably shouldn’t say it. He’s insists that we’re all adults, so I shrug, decide it’s rather tame, and go for it:

“What’s the opposite of Christopher Reeves?” Eyes widen around me, I continue… “Christopher Walken, heh…”

Suddenly it dawns on me.

I had completely forgotten I was sitting next to the one tube-breathing, chin-steering paraplegic in the entire film program.

I turned slowly, horrified, to look at him. He inhaled mechanically, then let out a small chuckle.

What a good sport. I spent the rest of the class sunk deep into my chair.

I was in a military school and taking an English course.

We were supposed to write a parody of Hemingway for a contest. I had a really good idea at first, but forgot it and couldn’t find the beginning notes that I wrote (probably because I’d been out drinking).

So I wrote something called “Farewell to Arms & Various Other Appendages.”

It turned out my English instructor was a combat vet who lost his leg to a mine.

I never noticed until then.

The first time i met my ex’s parents they gave me us 20 minute contraception lecture.

11. Asteroids where the sun don’t shine

When I had to work in General Practice, I saw this lady once who had given birth about ten days before and hadn’t opened her bowels since then. She was usually a “two a day”-er and was feeling absolutely bunged up (as a lot of pregnant women do) and had been taking some gentle laxatives as the midwife had advised.

When I first saw her, she was in a fair bit of discomfort, so I prescribed her this heavy duty suppository (phosphate- it’s like dynamite!) and talked her through how to take it, etc. She seemed pretty happy to try this, but she obviously was really uncomfortable with the constipation and was anxious to get home and take a good dump. She went home happy with what I prescribed her at the time.

Anyways, she made another appointment to see me the next day and had not a squeak out of her bowels, not even a rabbit poo. So I basically had to do a rectal exam to find out what the haps, I gloved up and put on an apron, lay her down on the couch, on her side, and I had a nurse chaperone.

To do rectals, I usually have to go on my knees- just because it…..makes it easier that way- but obviously sounds a bit odd. I….basically put my finger in and there was this asteroid sized poo.

I’d warned her beforehand that if I were to come across something like this, I’d “manually evacuate” it.

It turned out that that was the main cause of the traffic jam. Holding everything up. And I removed that. And, experienced the effects of the suppository of the previous day.

I basically got A LOT of poo on my arm. I’d rolled my sleeves up, but it flew above the gloves. It also got on my apron, but fortunately none on my clothes. I did have to disguise a retch as a sneeze though. Poorly. First and only time I’ve ever retched in front of a patient.

The nurse was very sweet and kept her distracted as I basically cleared her poo away, but she knew. She knew.

She was very thankful for my efforts though.

My most awkward moment occurred about a week after Heath Ledger’s death.

I am casual friends with a famous actor (IE we have very concentric circles of friends, but would never call each other up to hang).

A while ago, I ran into him outside of a bar where he was attending a wrap party for a small indie film. He had come from a Director’s Guild advanced screening of “The Dark Knight.” Our friendship is casual enough that I didn’t know that he had become close with Heath before his death.

Anyway, my actor friend proceeded to rave and rave and rave about how good the movie was and, in particular, how great Heath’s performance was. “He’s definitely winning the Oscar,” he said. Then, he invited me in to the party.

An hour or so later, I got a drink from the bar and turned around to find actor friend talking to another friend of mine and three girls I didn’t know. Actor friend was defending his position that the then-new Coldplay record was actually really good and that everyone was hating it for hating’s sake. “They’re gonna win, like, eight Grammy’s,” he said. I countered with – and these were my first words to the group – “Yeah, unless Heath Ledger puts out a record.”

No one chuckled or said a word. They all just quietly walked away.

It was awkward, but not terribly awkward. I knew my joke wasn’t that good and, likely, made a little too soon. Actor friend walked over to Bruce Willis, the girls went to some model-looking dude. I just assumed I wasn’t interesting enough for the group. I finished my drink and left the party shortly after, as I’m not terribly comfortable or interested in celebrity environments anyway.

Then things got terribly awkward…

I found out the next day that two of the girls to whom I made the joke were Heath Ledger’s step-sisters. I was just making a (kind of boring) pop-culture joke. I just didn’t know to whom I was making it. Oops.

I still squirm when I think about it.