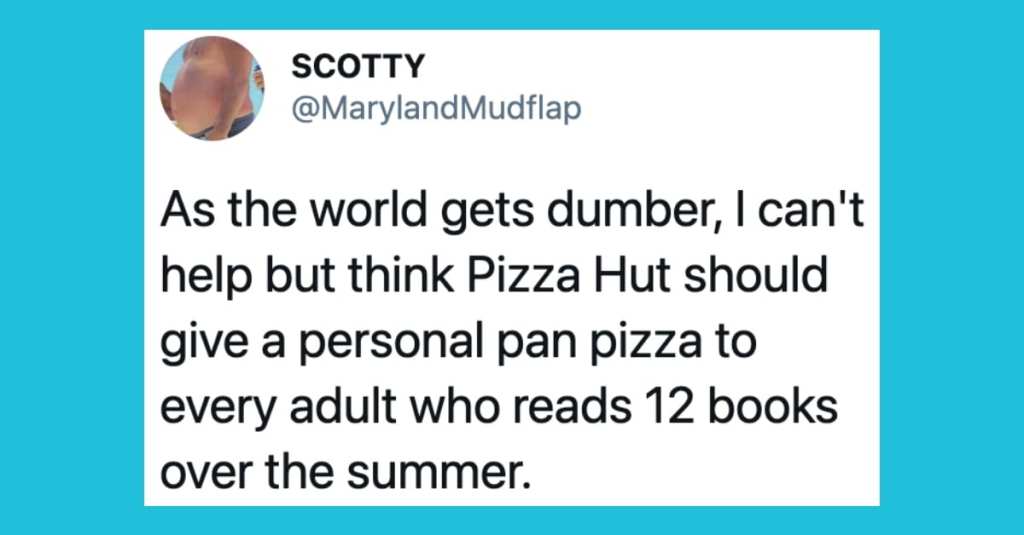 12 of the Dopest Tweets for You to LOL at Repeatedly

When we say these tweets are killer, we’re really not trying to scare you.

We actually just want to let you know how cool and funny they are!

We’re trying to be hip like the kids out there, so we thought using that term would impress you.

I knew it would!

Dig into these killer tweets, brah…and I’ll catch you on the flip side.

1. I always knew there was something off about him.

And now we have the proof, don’t we…?

2. I wish this would happen with my phone.

And don’t call me Shirley!

3. Time to move along, partner.

cw: no, I mean what are you having?

me: an unwanted conversation

What would we do without them?!?!

[creation]
GOD: You all have a divine purpose
HORSE: I will plow man's field
COW: I will give man milk
GUINEA PIG: I will test man's shampoo

6. Load up the white sauce.

This guy is obviously much classier than the rest of us.

cheers to my favorite guy of the day, who just called sour cream "white sauce" pic.twitter.com/GDbeDbSEpv

7. I think you misunderstood him.

i always wear this epi pen its rly special. my friend gave it to me literally as he was dying it seemed very important to him that i have it

Seems to be a lot of this going around…

dad: son, it's time i gave you something that has been passed down in our family through several generations *gives me alcoholism*

9. Not a pretty picture.

Hey, at least you’re getting some action.

What she sees vs what I see pic.twitter.com/9qML6QknW9

I’m gonna have to start using this one.

As the world gets dumber, I can't help but think Pizza Hut should give a personal pan pizza to every adult who reads 12 books over the summer.

12. I’m looking forward to doing this over the summer.

me chasing after the ice cream truck pic.twitter.com/uFh6F3ad7x

In the comments, please share some tweets you’ve enjoyed lately that you think would be right up our alley.

Or some memes, photos, or jokes!

We thank you in advance for your contributions!