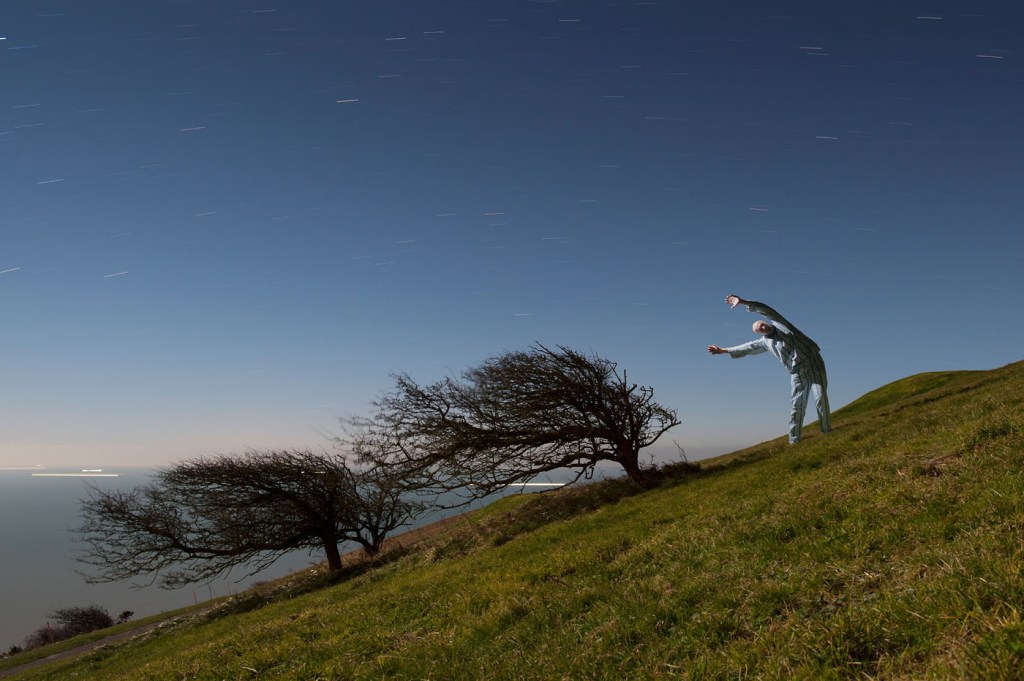 I personally find sleepwalking to be totally terrifying…and I’ve done it several occasions. I’ve never left the house or anything, but it’s enough to creep you out the next day when you hear you were walking around mumbling about random things.

These 11 AskReddit users had sleepwalking experiences of their own. Read below to see how their nocturnal jaunts turned out.

I woke up on my floor screaming with my foot covered in blood in the middle of the night. Woke up everyone in the house and was rushed to the hospital. We later looked at the blood on the carpet and moved furniture and figured out that I most likely had repeatedly dragged my dresser over my foot, ripping out a couple of toenails. Pretty scary to wake up with my foot covered in blood not knowing what happened.

On a lighter note, one time I flipped my mattress over completely and slept under it in my sleep, woke up completely confused.

Only ever happened one time.

I was met in a dream by my doppelgänger. She was a mirror image of myself, but more beautiful. Her eyes were bluer, her teeth whiter, her complexion clearer, her hair a shinier, longer blonde. She said, “When you dream, you’re in my world. I want to live in your world. I want to trade places with you.” I grabbed my cellphone, backing out of my apartment with my eyes on her, when a black shape exploded from a nearby closet flying straight at me. I turned and ran out my front door, and was headed down the narrow staircase of the old house I lived in when I heard a low, gravely voice say “Where ya goin’ Dolly?” The black shaped whisked around the corner and then, it was upon me.

I awoke in a crumpled heap on the staircase, my cellphone gripped tightly in my white fist.

My dad used to sleepwalk. One time, he woke up one morning and had about six cats sitting with him on the couch. They all had owners. According to his next door neighbor, who was very nosy, she saw my dad running around luring these cats with food and bringing them home with him in the middle of the night. He has no memory of doing that and can’t explain why he didn’t wake up to the meowing and scratching the cats made.

Luckily he didn’t get charged with animal kidnapping but had to start tying his feet to the bed post so there wasn’t anymore incidents for a few years. We also learned that my dad was allergic to cats, so there’s that.

4. That’s where they belong

I don’t sleepwalk much anymore but about a year ago I put several pairs of shoes in the fridge.

I have an ambien prescription and I often cook ambitious meals at night, with no memory in the morning. It’s not unusual for my roommates to find me cooking bacon at 3am. At first it was concerning, what if I burn down the house? However my unconscious self is extremely diligent- I ALWAYS clean up entirely, and usually end up cleaning the entire kitchen.

I peed down the stairs onto my dad once.

7. Lost in the hotel

One time in a hotel, my little brother left the room and walked down the hall before waking up. He didn’t know our room number.

Funniest: My fiancee used to work 3pm to midnight. She came home one night and I was asleep, but had forgot to charge my tablet. She came on my side of the bed to charge it for me. As she bent over, I sat up and smacked her on top of her head. She asked me what the hell was I doing, and I told her I was checking to see if she was real.

Scariest: Jogging naked down a road that doesn’t have street lights or sidewalks. I could have easily gotten hit.

I once woke up on the foosball table. Like, standing on top of it, with the little players like little legos piercing my feet. It was totally dark, my feet were in pain and I couldn’t understand where I was when I woke up, so I panicked pretty bad until my mother-in-law heard me and came to rescue me. The weirdest part is that I tried to get back on that table when I was awake and it’s virtually impossible. It was a very small table that’d topple over long before anyone could get on top of it. I’m spiderman when I’m sleeping, it seems.

My grandmother used to sleep walk, and she lived in a NYC apartment, a few floors up. She was in her 20s and hadn’t had kids yet. A neighbor she didn’t know named Margaret saw her about to sleepwalk off the balcony, so she brought Grandma into her apartment to sleep on their couch and not be alone. After that Margaret and Grandma were friends for life and their kids grew up like cousins.

I once walked around screaming for help in a friend’s house during a sleepover. My father had much worse experiences when he was a child, though. He grew up in an old mansion where my grandmother was the housekeeper. He once waled into the owners room in the middle of the night, which did not go over well; another night he walked up to the attic where he woke up in the dark surrounded by a bunch of stuffed animals.