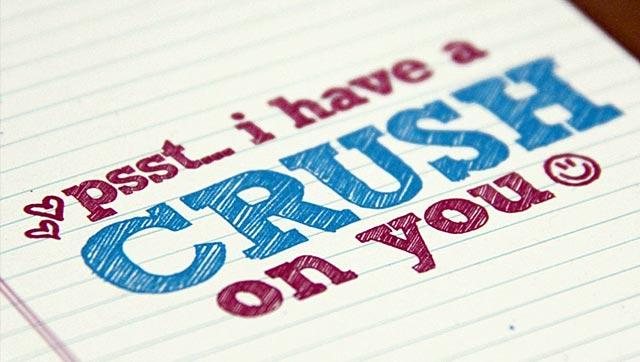 We all want to be loved, right? It’s such a great feeling.

But when somebody we don’t like that much REALLY wants to love on us, well, things get awkward fast.

And let’s get to it…

Not me, but a friend – in high school, there was a kid who sat behind her in math class. He would play with her hair, and whenever a hair would fall out, he’d keep it and stow it away in the battery compartment of his calculator until he had a little ball of girl hair.

Then the year after, he got a pretty drastic haircut, saved all the hair in a bag, and presented it to her for Christmas.

After knowing me for a mere five days, he asked if he could paint me naked and even though I said no, he proceeded to tell me he was in love with me.

I immediately went to get moved to new accommodation, because things got creepy fast. While I was gone he left a suicide note on my door.

He disappeared for 24 hours.

I was interviewed by the police.

I was in high school, sitting in art class when this guy walks over. I didn’t particularly like him or not like him. I didn’t know him that well.

He stops at my table and casually asks for my phone number. I say “Sure!” and he pulls out a piece of notebook paper filled with phone numbers…all suspiciously the numbers of nearly every girl in our grade.

It was too late to say no and I got a phone call from him at least a dozen times a week for a month.

The fact that no one ever picked up (save for the first time….boy was that an awkward phone conversation) never stopped him. I just pictured him calling down that list every day.

My best friend came out as gay and then proceeded to tell me how much he liked me.

He knew I was straight, but decided it would be appropriate to straddle me whenever I sat down around him.

Still waiting for it to stop.

I had a stalker. Not even kidding, or well… as much as you can call someone a stalker in High School.

I always treated my “stalker” with respect (Even though it was weird), she would follow me around school, give me these love letters, draw pictures of us together, make me these home made bracelets and necklaces, call me up at the most random times she even had my private email address. I tried to let her down easily multiple times but she didn’t give up.

One time she appeared at my house crying, I had to take her in and stop her from crying. She would occasionally call up crying and I’d have to talk for hours on end to try and calm her down. One day I just had enough, so I told her as directly as possible (while still trying to be nice), “I’m sorry, but I’m not interested okay…?”

She disappeared about a month later, moved country, school etc.

Two years later she came back, I added her on Facebook and she told me she was sorry, talked to her a while and she seemed to have lost her craziness, she now has a boyfriend.

My boss proposed to me – twice – back when I was living in Japan.

I quit the second time.

I once bought a girl (with my mom’s money) a small box of chocolates for valentines day IN THE 5TH GRADE.

Then a little bit later on, like 6 YEARS later, she came up to me and hinted that she wanted to go out with me.

I was getting over a stint in the hospital and dropped a lot of weight and muscle mass during the stay. I needed to monitor my health and diet carefully so I was signed up for a program for personal fitness training and meal planning.

It helped immensely and I ended up feeling better than ever down the road. However, my PT halfway through became a bit too observant with my progress.

He’d make breathless observations about my legs and hips, then stomach. I thought it might have been crossing a line of some sort when he starting becoming more “detail oriented” in measurements.

He told me the truth one day that he felt like I was his project and that he became seriously fond of where I was going physically.

I really could have ended his job right then and there and save myself some dignity, but like the raunchy fool I am it just turned me on. I didn’t indulge in it however, but backed out of the program quietly before I got myself into a mess.

Here’s a different spin on most of the stories I’m seeing. For clarity, I’m a female.

In Junior High, I stayed after school with 3 of my friends for some reason. When we were waiting for one of our parents to pick us up, there was another group of 3 or 4 girls waiting in the school lobby after they had volleyball practice. All of us were chatting with each other, we introduced ourselves, laughing about this and that, and eventually we all left.

The next day at school during a class, I’m walking down the empty hall when one of the volleyball girls comes around a corner and starts walking towards me. Recognizing her, I say “Hey Sarah!” and sort of wave, she kind of responds awkwardly as we pass each other. That was that.

The following evening, I’m sitting in the stands at our Junior High gym watching a basketball game with some other friends of mine. I stand up and turn around to rifle through my bag for something when I see her sitting behind me. I give her a big smile and say “Hi!”. She looks at me strangely and asks “Why do you keep saying hi to me?” I realized then that she must not have recognized me from that day after school. Embarrassed as hell, I didn’t offer an explanation and I just left.

Fast forward a few weeks. I start dating this older senior guy and we’re walking hand-in-hand down the hallway in between classes. Kids are all around talking, yelling, slamming lockers. I notice out of the corner of my eye that we’re walking right past Sarah. Her eyes are glued to our hands and she has this confused look on her face.

I find out later that she asked one of my friends if I was gay.

tl;dr – Girl in high school thought I had a lesbian crush on her.

Several years ago, there was a girl who lived in the apartment above mine. She was a nice enough girl, but pretty severely lacking in social skills (home-schooled by super-conservative mother in small-town Oklahoma).

I’m a pretty friendly guy, so I would say hi to her in passing, or make small talk whenever I saw her around. Apparently, not many people had done this with her, so she took this as a sign that we were “meant to be” (despite multiple statements on my part that we would never be anything more than friends).

By the time I moved, she was stopping by my apartment to hang out at least 4-5 times per week, usually within about 10 minutes of when I got home. There were a few times when, if I was late coming in from work, she would be sitting in front of my door waiting for me. One time, she even admitted to waiting over an hour for me to come home.

We swapped numbers when I eventually moved, but unfortunately, I somehow “misplaced” her number during the moving process. She added me on Facebook a couple of years ago, but I really haven’t heard much from her since then. I’m kinda hoping it stays that way….

In this village there was a couple, they had some horses, one of them got sick. As a horse lady I offered my help and went there a few times.

They had a harvest ball and I attended, danced valce with the guy. The couple divorced pretty soon. This old guy started hitting on me, which I rejected kindly.

Now, months later, I hear that whole neighborhood thinks I’m pregnant with him and dating him for money. And the woman actually left the guy cause she was jealous – over me. The guy has such a crush that he won’t tell anyone the truth (which is that I’m absolutely not willing to anything with him).