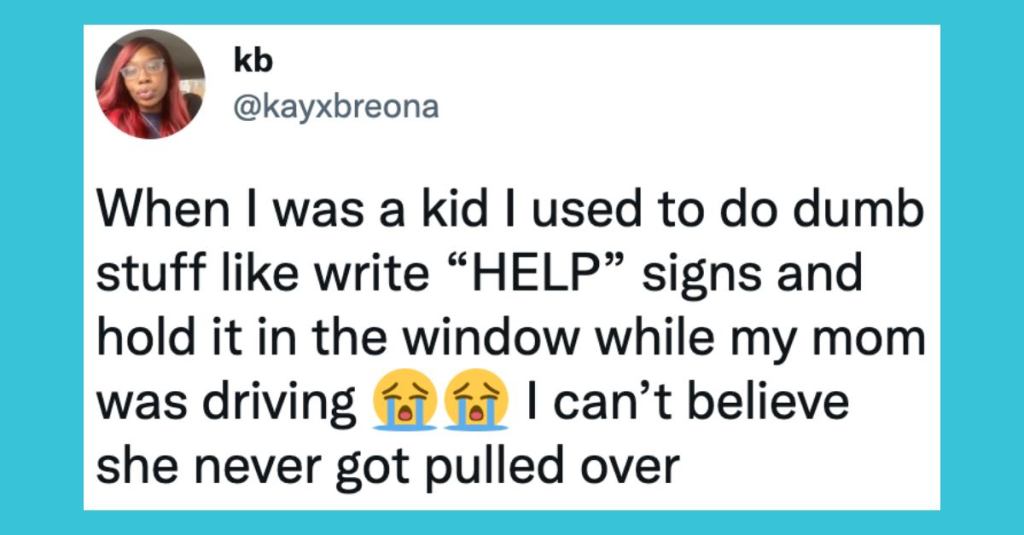 Don’t be ashamed to admit it…

We all did a lot of stupid things when we were young!

These 11 folks were brave enough to admit the embarrassing things they did as kids.

Let’s see what they had to say.

When I was a kid I used to do dumb stuff like write “HELP” signs and hold it in the window while my mom was driving ?? I can’t believe she never got pulled over

It’s gonna be a blast!

Was making fun of my older sister for saying something dumb, then she reminded me how badly I wanted to go to the greyhound races in Florida when I was a kid cuz I thought they were racing busses.

It’s impossible to win a sibling fight at any age when ur the youngest.

when i was a kid i used to drop my dogs poop off the window until the ppl in my building started noticing it then i stopped doing it pic.twitter.com/jL5pBMEduG

I hope it worked!

The only fr dumb thing I can say I did as a kid was have my cousin punch me in the face because I had a loose tooth.

It’s rough out there…

What’s a dumb thing you used to think as a kid?

I remember thinking that if you had a bag with a shop label on it, then other shops wouldn’t let you in as they had some kind of gang rivalry and it would be call for war if you did.

6. The angels are bowling again.

When I was young I was told thunder is just the angels bowling. So I grew up thinking angels were overweight guys with a drinking problem.

But we all gotta do it.

I did a lot of dumb shit as a kid, but the dumbest thing I ever did was when I wanted to be an adult.

When I was a kid I used to think all the girls are born with babies in their stomach, and when they get married, the babies come out the next day ??

9. Funny how that works.

When I was a kid I really thought quicksand would be the bane of my life but it’s actually the never-ending loading and unloading of the dishwasher ??

When I was a kid I tried to erase the bra and panties off the models in the catalog. I ripped a lot of pages. What is one dumb thing you did as a kid?

When I was a kid my biggest dream was to become spider-man my dumb ass would check my fingers in the morning to see if i could climb walls??

What dumb things did you believe as a kid?

Admit your shame in the comments.