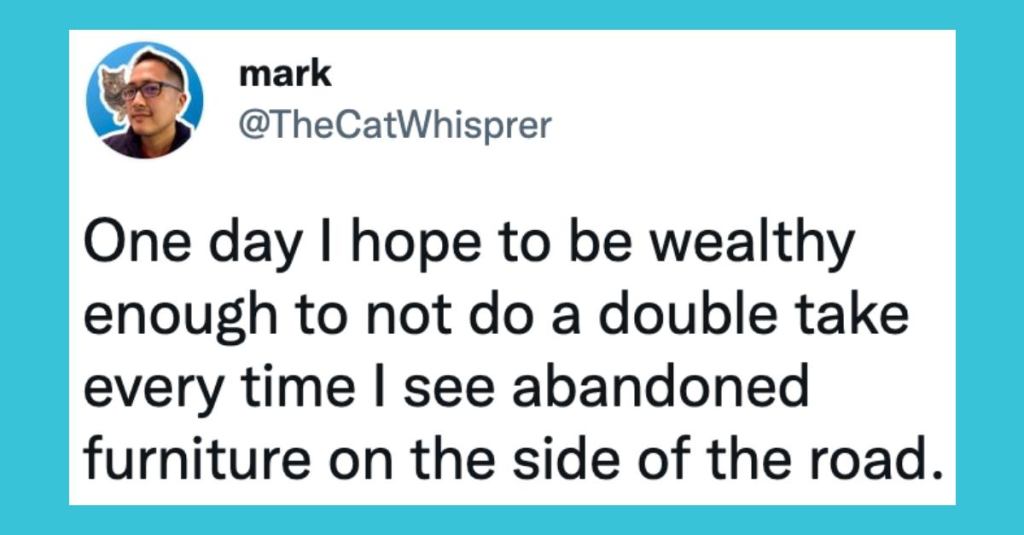 10 Funny Tweets About Having Absolutely No Money

Be honest with us…

What do you think is the most broke you’ve ever been in your whole life?

Also, how did you deal with it?

No doubt about that!

And these tweets accurately sum up what it’s like to not have any money.

Cashier: do you want to buy a bottle of water for $1? The money goes to charity
Me [pretty thirsty]: I already had some water a few days ago

One day I hope to be wealthy enough to not do a double take every time I see abandoned furniture on the side of the road.

Get ready to run!

[restaurant]
DATE: Tell me something naughty about you

ME [loudly chewing lobster] I haven’t brought any money

6. Why are you doing this again?

We’ve talked about this!

How my bank account looks at me when I spend money on food & alcohol . pic.twitter.com/R6KoRWb3eF

[Walking around park with kid]
Daughter: Daddy, why is grass green?
Me: Because God wants to remind me every place I go I have no money

I haven’t seen this one!

When you’re low on money, getting stoned and looking at pictures of helicopters counts as seeing a movie

More of that, please!

The sexiest fantasy in 50 Shades Of Grey is the bit where she gets a job in journalism without having to do years of unpaid work experience.

Are you broke as a joke right now or doin’ just fine?

Give us an update in the comments!